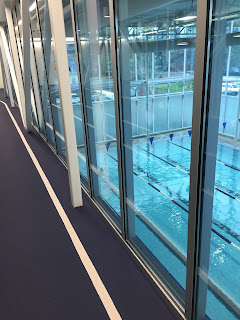 Yesterday while running errands, we stopped at the gym and re-joined. The timing was fortuitous; they're running a former-members special, offering all of November for free, with no upfront membership fee. That probably saved us $200-225, given that we were already set on this gym anyway.

We'd decided on re-joining about a month ago, but one thing or another came up and we just never made it over there. I was also dragging my asterisk because the 3 Day was coming up and I always dye my hair for it, but hair dye and swimming don't go well together. I figured I would just cut it super short after the walk, then let if grow until March for St. Baldrick's.

Okay, so we committed to it again. I've missed swimming and finally feel like my shoulder can handle it again. I headed over there this morning with the idea that I would only swim for half an hour, no matter how many laps it turned out to be. No ego in the water for now; when I had to stop because of my shoulder, I was doing a mile and a half, roughly, in a little over an hour. So I'm slow compared to other swimmers, but that was pretty freaking fast for me.

I'm not racing. And I'm not going to do what I did before and get from zero to a mile too quickly.

So I got around 900 meters, a smidge over half a mile, my half hour was up, and even though I felt like I had more in me, I got out of the pool and headed for the locker room.

Now this is where I admit I should have checked the pool schedule before leaving the house. There was an aqua aerobics class going on when I got there (there are 3 pools...they were not in the lap swim pool) and I noted the dozen or so little old ladies bobbing around before I slid into the lone open lane in the lap swim pool.

I have no idea when they finished. When I got out of the water there were still a couple people in the other pool, but I didn't clue into the fact that they might have just finished, so all those older women were probably in the locker room.

I showered, and when I was done there was a line waiting for the swimsuit spinner, and every changing room was occupied. I didn't kind waiting in line to spin the water out of my suit, and I don't really have a problem changing by my locker. I mean, I prefer to use the changing room because when your skin is a little damp, getting into a sports bra is not always a graceful sort of activity, and I prefer to strangle myself with the straps in private.

I could have waited, but, eh...I'm not that modest. So I started digging my clothes out of the locker and someone sat on the bench near me so she could put on her shoes and wait for a friend who was changing in one of the aforementioned rooms.

It was at this moment I remembered that older women--I'm talking later 70s and up--don't really give a shit about anything. Even in the locker room. They don't care if you're bare-assed naked, trying to dry off, and they don't care if you're wrestling with a sports bra, trying to get it on with still-damp skin, while not bouncing so much that your still-ample gut flops around like a dead fish.

They just don't care, and if they're interested in your tattoos, they will forking stare. Then they'll lean closer to get a better look at the details, and start asking questions about them.

To my credit, when she asked about the tattoo on my calf, I did not turn and let my flab slap her upside the face. I just answered her, relieved that I'd finally gotten the damn bra on. She scooted a little closer and asked about my Max tattoo, and then the Disney tattoos, and really seemed to like them, which I normally wouldn't mind, but...lady, I'm in a bra and underwear, I want to put on my shirt and jeans, and I can feel your breath on my arm.

To her credit, she didn't touch. A lot of people do, especially since my tattoos are mostly on my forearms. Still, she got super close and was witness to my bra-struggle, so we might be engaged now.

OMG that made me laugh

Get the ring first!

Orange juice SHOT from my nose ... and it hurts!

There is always one that wants to talk. About everything. I WILL be that one. I promise not to stare at somebody's body parts.