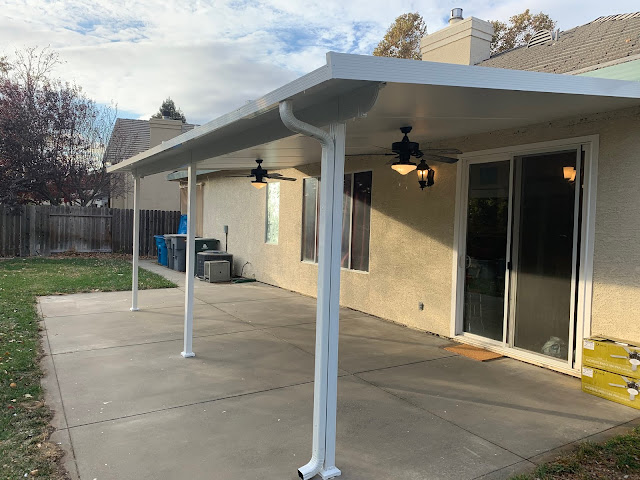 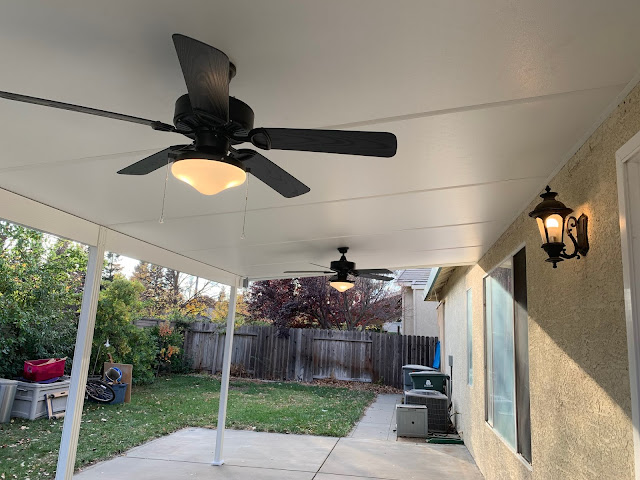 So the demolition and building of the new patio cover was supposed to start today, and take three days. It started on Wednesday instead, and they finished yesterday.

It only took part of Wednesday to tear it down, so they got a good start on getting the new one partially built, so yesterday they were done by 3:45...and other than the fact there's a new cover, you'd never know they'd been there. Every little scrap they brought in, they took out. And the original plan was to roof-mount it, leaving an inch or two gap between it and the gutter line; I don't remember why we picked that--possible because it left the gutter accessible for cleaning--but the kid in charge of actually building it re-measured and said there was plenty of room to wall mount it and it would look better.

I think he was right.

We can hire someone else to crawl up there and clean out the gutter next year.

In any case, it's done. And done ahead of time. Done while the Spouse Thingy was home, which means I could have gone to San Diego.

I soothe my disappointment about that by reminding myself that my back forking hurts right now and has for a bit, and I don't think going up hills would have helped that any.

I can still ride, though. And I'm getting ready to do those 60 miles, probably week after next. Thirty miles one day, thirty the next...or as many miles as I can do on day one, and finish the next. Who knows? Maybe I can pound out 40-45 on day one.

Why would I do that?

Because that burns mad calories, and that means I can then EAT ALL THE THINGS.

I want to do that. I want to EAT ALL THE THINGS.

And last night's DRINK ALL THE DRINKS? I am soooo glad I don't get hangovers [knock on wood.] If I did, today would taste like anger and gym socks.

The patio overhang thingy is GREAT! Nice and rainfree (I would love to sit outside and hear the rain all around me). I have a sunken patio below a deck. I don't want to make the deck a solid surface, but it occurs to me that I might set corrugated plastic panels below the deck angled to send rain outside. And enclosed the patio with screen to keep the mosquitoes out...

And then sit under there listening to the music of the rain hitting above me...

Cleaning gutter tip, if you can get on the roof, blow the leaves out of the gutter with a leaf blower. Quick and easy.

That's how he usually cleans the gutters...but I might be happier if he quits climbing ladders that high and just pays someone else to do it. Or maybe FINALLY pop for gutters that krap doesn't get into...