He was pretty sure the skates had eaten my feet...

I dug the skates out of the garage last night--bought them 6 or 7 years ago and never use them--and decided to see if I could remain upright on them. I managed to skate up and down the hallway, but I can't stop worth a damn, and I'm not really sure how to turn...but hey, I didn't fall!

Sometime soon the Spouse Thingy and I will both put our skates on and roll around the court out in front of the house, and if I don't die I may eventually wander off the court. We were going to do it this afternoon, but sudden rain saved me from surefire humiliation. Maybe next week.
Posted by Thumper at 3/31/2010 06:01:00 PM 17 comments:

We had to take my scooter to the shop on Thursday; it's time for its routine maintenance--oil change, air filter, check all the belts and hoses and fluid levels--but it's also developed a bit of a problem with the front hydraulic seals.

Every so often I find it listing to one side or the other in the garage, and when I start it up, the horn blows 5 times, the on-board computer code for "Hey, your hydraulic seals are busted.". After digging around online, I discovered it's not an uncommon problem with the MP3, but it doesn't effect how it handles while riding, and it's not a complicated fix.

But...It's an Italian bike and there aren't a whole lot of parts distribution points in the US, so I might not have it back for 2 weeks. TWO WEEKS!

This next week is supposed to be a little rainy, so I'll survive, but the week after? I bet it's going to be all sunshine and warm and perfect riding weather, so I'll be especially grumpy.

This is all punishment for forgetting Buddah's birthday. Yep, I forgot, and the poor little guy didn't get any presents or special treats on his 5th. I actually feel bad about that.

It figures, I find the cool toys when it's so late in the season begging for one is useless... 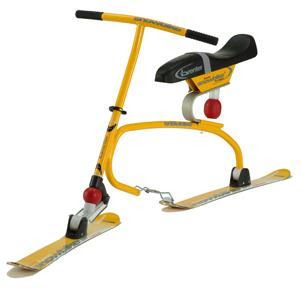 Maybe for an early Christmas present. Like, as soon as the ski resorts open... 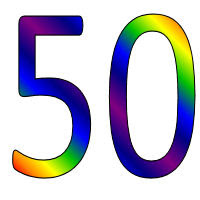 My maturity levels know no bounds.

Look, I've read all the Twilight books; I have the DVD of the first movie (though I haven't watched it yet; I'm waiting until I can lure the Spouse Thingy into bed, where I will use my wiles--or whatever--to get him to watch it with me, further evidence of how mature I am) so I'm not some anti-Twilight harpy. I don't think the books were stellar literature, but they hit their target market well, and anything that gets kids reading is, IMNSHO, a good thing.

And sure, anything that appeals beyond its target audience is a good thing, too; Stephenie Meyer tapped into the inner young teenager of a whole lot of middle aged women across the world, and sucked them in as easily as the kids.

But even I have my limits. 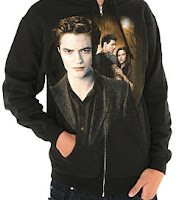 This afternoon as the Spouse Thingy and I waited at the Jenny Craig center, a woman walked in wearing this sweatshirt.

We automatically turned when the door opened; that's what people do, even if they're not expecting anyone they know to walk into a room. But I had to turn away and look out the window, literally clenching my teeth and biting my lower lip to keep from laughing at the absurdity of this 50-some year old woman in capris and Sketchers tennis shoes wearing an obviously loved Twilight hoodie with a giant Edward Cullen head plastered on the front.

Ok, so I wanted her shoes.

And I'm not even 100% sure why I thought the hoodie was so absurdly funny. But I didn't laugh, so I get bonus points for that, right?

Nice and bright and shiny and very red.

What doesn't appeal to my inner 8 year old is having to get a new washer because the old one decided to die a miserable death mid-load. I don't think appealed to the Spouse Thingy's inner anything to have to get his soaking wet, half washed clothes out of the washer and take them to Dixon's only laundromat to rewash them. Me, I stayed home... Hey, they weren't my clothes. And I was busy. Doing...something. I forget what. But it must have been important.

So yesterday, instead of driving back to Tahoe to give skiing another try, we went appliance shopping. Yes, I made him go with me, you can imagine the sheer joy he felt in having to go multiple places, finding the right one, waiting while the sales clerk started the paperwork, then finding out it might be weeks before it came in. I'm sure he was ecstatic having to go yet another place to find something similar.

But hey, it was about a hundred bucks less, so he had that going for him.

Something we learned on our little snow adventure: South Lake Tahoe apparently closes at 2 pm on Mondays. The first hint of this came when we discovered that the restaurant next to the the hotel had a "closed Mondays and Tuesdays at 2 pm" sign on the door.

Not a problem; I whipped out my iPhone and used Yelp to find reviews on nearby places to eat. Less than a mile down the road was a place that sounded promising, so we headed out, and along the way it seemed that there were quite a few darkened storefronts.

And then the restaurant we'd driven to was closed.

In the same parking lot was a KFC, and it was open, so we parked in front of it and went in, reasoning that one fast food meal wouldn't hurt. Well, we hoped it wouldn't, but I brought plenty of Immodium, so it wouldn't hurt too much.

Then on the drive home the next day, both so hungry we considered peeling pleather off the dashboard and munching on it like beef jerky, we stopped at an In-N-Out.

And later that night...well, the pizza was a deliberate choice. And it was freaking good.

My diet this week was fairly craptacular, so I wasn't surprised when I got on the scale and was up a pound.

Hell, I was grateful it was only a pound.

The only downside is that now I'm 2 pounds from hitting 50 lost. I'm not moping about gaining it; I knew when I was shoving crap into my mouth that I was likely going to gain a little this week, and I was fine with that. I'm trying to lose weight, yes, but I'm not trying to "diet" so much as I'm trying to change overall how I eat, and once in a while a person caves to the lure of the junk.

But now it's back to eating sensibly, because I don't want to find myself feeling like the crap I'm eating, and I really want to hit 50, and then move on to hitting my final goal.

Hey, when I get there, I might even admit what weight I started at.

Don't we look spiffy? Almost like we're standing there, knowing exactly what we're about to do, and thinking we have it freaking nailed.

It didn't work out quite that way.

I mean, it started well. I snapped my boot into the ski binding like I'd done it a thousand times, but then it all went downhill from there.

I had issues from the start. First, I am so damned out of shape that just getting up the tiny hill was hard work and I had a hard time catching my breath. Then while everyone else was doing that wedge down the little hill, I was stuck. One ski wanted to move, the other was plastered to the snow. So I fell. First person of the day to go down like a sack of potatoes. It wasn't embarrassing, just frustrating.

So because everyone else had wedged their way down the tiny hill successfully, we were pointed toward the lift chairs.

You know, the chairs that take you up a freaking mountain.

Getting on the chair was a snap. Getting off, not so much. Almost everyone got off that lift and fell flat on their asses. Since it was the lift to the top of the bunny slope, the attendant at the top was prepared, practically ripped skis off left and right and moved them out of the way, so that we could easily scramble, lest we trip up the more experienced skiers.

And then my day got worse.

My right ski, it wanted to slide. My left ski refused to budge. We were supposed to wedge our way across the hill, but the snow was sticking to the bottom of that left ski, and I was going nowhere fast. Well, other than the right side of my body, which wanted to take off.

I finally took the skis off, wiped all the snow off the bottom, and got back on, but by then the damage was done. I'd had a little too much time of my right side moving and my left side not, which does not favor old knees.

Forty minutes in, I was done, lest I rip my knee to shreds. I took my skis off and walked down the rest of the way.

You know how hard it is to walk down a mountain in ski boots, carrying skis?

It's not that freaking easy.

The Spouse Thingy went on another run, and he didn't do half bad. But by then the winds had whipped up, snow was falling hard, and we were worried about the worse weather that was headed our way. We'd already checked out of the hotel when we learned that tomorrow called for baby-blizzard conditions, deciding to forgo a second day in the snow on order to get out of the mountains.

We still have lift tickets, though. We may try it again next week, but with skis rented from the pro shop and not the ski school...I got screwed on my unwaxed sticks, and feel like I'm damned lucky I didn't really do some damage.

Still...it was pretty, and we had a killer view from the hotel.

Across the street from our hotel room