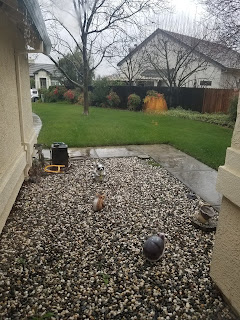 Were I less of a weenie, this wouldn't stop me from going outside for a bike ride.

I am, when it comes to being cold and wet, a royal weenie. I am the drag king of weenies.

I am the whining drag king of weenies, because I want to go outside and play, but it's cold and it's wet and it looks like it will be for the rest of the week and possibly through the weekend.

A few weeks ago, I whined less about the rain because we really needed it. But come on, Weather Fairies, enough is enough. Flooding is the issue now. We need for it to not rain for a few weeks.

No, seriously, we've hit the point where it would probably be better if we didn't have any rain for a while. Snow in the mountains, adding to the snow pack, would be good, but rain down here is just going to get complicated. Also, my mood is going to suck if it keeps up much longer. 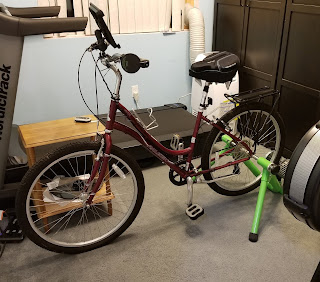 I have the road bike propped up on a trainer and I have the treadmill, so it's not like I can't do anything...but I'd rather be outside and not in a small room that will quickly smell like my armpits.

Eh, that's actually doable, even on the trainer.

Thirteen days until St. Baldrick's and this might be the year that I'll be mostly okay with having my head shaved. No, I'm not happy about being bald, but I dyed my hair purple a couple weeks ago and I think I might be a tiny bit allergic to this particular dye. My scalp has itched since then, and I have a rash on my upper back, likely because as I shower, the dye drips down.

That means there's a real chance that when they shave my head, I'll have a giant red rash on the back side of my head, probably throbbing at anyone unlucky enough to be behind me, Like, who wouldn't want to see that?

I'm $443 shy of what I raised last year, but I don't really want to amp up the fundraising, not on the heels of registering for the 3 Day and getting a ton of donations for that already.

But, still, I'm sure as hell not turning down any donations. If you want to support research into and treatment of childhood cancers, click [here] and contribute to my public humiliation discomfort. 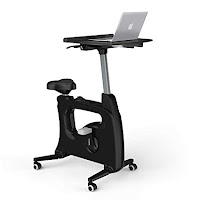 Oh, and I have one of these. A Flexispot desk bike, not the Mac computer.

It is no longer enough (hence putting the road bike back up) and it's taking up space.

It's actually a decent little bike. It has a small footprint, but doesn't feel tiny when you're on it. You can ride hard on it with the tension notched up, but if you do stuff on the desk will go flying. It's pretty perfect for working up a light sweat while surfing online or reading, and quiet enough to watch TV. The desktop is adjustable, so you can get it right where you want it.

And for all you people waiting for a purple cat pen, the Spouse Thingy got his first batch of supplies and is, at this very minute, in the garage working on the first couple.

What he couldn't get are the silver/chrome bits, so if you wanted that in particular, the stuff is on backorder but he's keeping his eye on the supplier so as soon as he can, he'll order those.

Um. Yeah. About that not walking the 3 Day again because it's just too rough on my body.

Eh, what the hell. What's the worst that can happen, other than dying?

Between all the bike riding and trying to get my pace down for the 2020 Hot Chocolate, I think I have the training covered. Basically what I'll need for the actual walk are drugs (I am not even kidding...though I'm not sure I can convince my doc to give me Norco for this and I don't have any left), Fireball (there should be some on route), and donations.

The Spouse Thingy has already asked for the time off for other things things this year so I'm not sure he can get off for the 3 Day, but if he can...we'll see. It would be fun to walk with him again because I can keep up with him. And this year we would both be in better condition than we were in 2017.

At 9:45, when I was making my own breakfast, he sat on the floor and insisted that if he didn't get fed again, he was going to pass out, and quite likely loose control of his bowels and bladder, and wouldn't that be a shame since Buddah had just pooped on the floor 18.387 inches from the litter box?

I'm not a monster. On the off chance that he really didn't eat enough two hours earlier, even though there are two bowls full of fresh crunchy food, I opened a can and fed the little monsters again, because of course I did.

He ate three bites, sat down, and proclaimed the offering insufficient. To assure that I would have 3 minutes without a cat in my face so I could eat my own food, I gave him a few crunchy treats. He ate them, proclaimed that good enough, and walked off.

At 11:45, he jumped into the chair and began working me for early lunch. He's not hungry, I know he's not hungry; were he truly hungry, he'd go eat the food that's still on his plate in the kitchen. But habit is a snack at 11:00, and he did not get that snack because he'd been given something just a little over an hour earlier.

I know him. He's going to whine at me until I cave in, no matter how long it takes--it will take until 2pm, when it's time for a snack--and he'll think he won. (And yes, he gets fed a lot. Minimum 5, sometimes 6-7 times a day, just to keep his weight at 12.5 pounds.) Every few minutes I'll interrupt him to remind him that I'm working and I really don't need the distraction...and he won't care.

And people wonder why I work at Starbucks so often...

Which I am about to do, because we're into the second draft of his next book, and he's not helping the process... You think he would understand that, but no.

Perhaps my expectations are too high.

Just a little under three weeks to St. Baldrick's and the annual why-did-I-do-this-I-hate-being-bald shaving of the hair. I'm just shy of halfway to goal...don't you want to participate in my misery? Because I will be miserable for a couple of weeks.

Your donation is tax deductible, if you itemize. If you don't itemize, well...you get to help the kids while encouraging me to do humiliating public things. And isn't that the point? Making me do things?

Speaking of doing things...I registered for the 2020 Hot Chocolate 15K in San Francisco. It's not quite a bucket list thing, but one of those things that if I don't do it soon, I'll have regrets. I can do the distance, it's the pace that's a problem.

I registered the Spouse Thingy, too. LOL let's see if he'll do it. 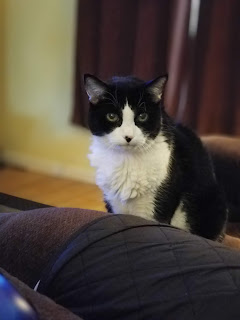 We have reached the GET UP AND FEED ME portion of the afternoon. Man, is he going to be pissed when I get up and leave the house...

Come on...you know I'll give him something before I go. I'm that easy.

Yesterday, following the mass consumption of steak fresh off the grill--and they got as much as they wanted to eat in lieu of opening a can of cat food--they plopped down on the bed fairly close to each other.

Sleeping did not occur; it was a coordinated effort to keep the bed from being made. I swear, Max especially knows when sheets are going to be changed and when beds are going to be made, and he makes a beeline for the bed. If it's sheets, he wants to help, and by help I mean he wants to get in the way as much as possible and turns into a furry little crack headed monster, chasing fabric and jumping on it like he's just brought down a cow all by himself. If it's bed-making, he wants to stop it. And yet, he loves sleeping on a nicely made bed, getting his fur all over it.

I've given up trying to figure them out. 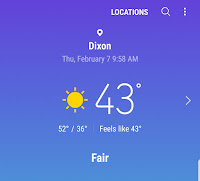 I am a cold weather weenie.

It was 33F in the front yard when I got up this morning at Stupid O'clock, and I've been waiting, sorta patiently, for the temp to get to 46-47F . It's supposed to be a nice, sunny day and the rest of the week is not, so I'd really like to get a bike ride in. Between the rain we've had and errands that got in the way, I haven't been on the bike (other than a really short one last night) in a week. I'm falling way behind on my mileage goal for the month.

If I were not a weenie, I'd be outside right now, riding in circles around Dixon.

The Spouse Thingy is not a weenie, so he's outside mowing the grass. But that's also not at 14 mph, so he only gets 7 Not-A-Weenie points. He'd get 10 or so if it were a bit breezy. 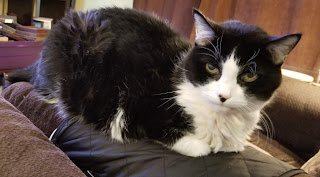 He's mad because I don't have my lap available for his use. I keep telling him we're going to watch 2 episodes of Star Trek: Discovery tonight and he can have it then, but that's not good enough.

Suck it up, cat. I'm busy waiting for it to warm up enough to go outside and play, and while I do that I have work to get done. And Reddit to browse. And comics to read. I have stuff, cat.

Yes, I talk to him. We have long conversations, mostly about my failings.

A little over a month to go, a little under halfway to goal...