Ok, help me figure this out.

You're a male in your late 30's on the Registered Sex Offenders list. Your victim was an 8 year old girl.

You only got 10 years probation.

You still own and operate a martial arts school, with seemingly no difficulty.You have a large student base, many of them young boys and girls. A few of your adult students are police officers.

Now...what the hell kind of offense that's bad enough to get you on that list will still allow you to be present in that school, where you are around and actively teaching children?

♦ Summer finally feels like it's on its way out, which is a relief because we've had some farkton hot days and I'm ready for fall and winter.

♦ The hot streak has made me appreciate having air conditioning, however. For what it cost to replace the damn thing, I better be appreciating the hell out of it.

♦ The arrival of fall also means longer bike rides. I bought the new bike in the middle of a heat wave and didn't get to take it out much at first, but in the last week I've put about 60 miles on it. That still doesn't sound like a lot, but I'm fat and out of shape, so it's a victory.

♦ We're using the bikes as cross training for the 3 Day. The problem is that bike riding is a hell of a lot more fun than walking, so the temptation is there to just go ride.

♦ There's about 9 weeks left until the 3 Day. We will be ready. We will be slow, but we will be ready to walk. We've discovered we really enjoy walking around downtown Sacramento, so we go there a lot. I still want to get a few long walks done in San Francisco, though. Nothing beats walking from the Wharf to the Golden Gate Bridge.

♦ Spouse Thingy and I have both met our minimum goals and we're so close in the amounts that it feels like there must be a winner. I'm only $5 ahead right now. I will fix this.

♦ Max's first book in a new Wick series is out, The Space Between Whens, but we're taking a bit of a writing break so that I can focus on training and reading other peoples' books for fun. I might take notes for the next one, but actual writing thereof might not start for a few more weeks.

♦ It's almost 3pm and I forgot to eat today. This is a first.

♦ Asked Max what he wants to do this afternoon, this was the answer: 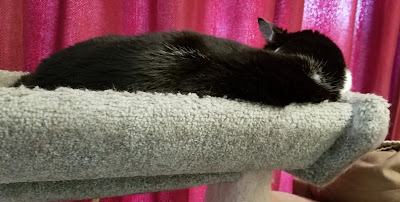