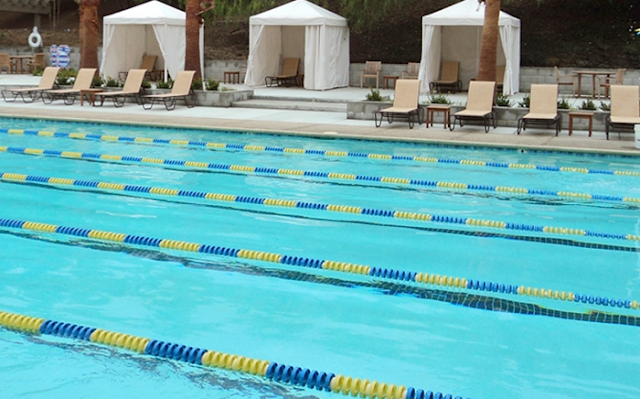 I picked other things to do. Walking. I bought a spiffy neon pink bike and love the hell out of riding it. But I missed swimming, and more importantly, my back missed swimming.

We got a rowing machine to help, but it was clear pretty quickly that I needed a stronger back to be able to row without making the pain worse. So...we went back to the gym I was most comfortable at, the one with a 7 lane lap pool, a family pool, an aerobics pool, and a hot tub. The pools are outdoors which won't be ideal in winter, but the other gym, the high-end super clean we-are-important gym with the indoor pool heated to a perfect level of warm-but-not-too-warm, always made me mentally itchy and seriously uncomfortable.

I'm not sure if it was the "we're better than everyone else" or the cutting looks I got from other women, but I never wanted to go and always found excuses not to go.

I walked into the gym today, and not one mental itch. No one looked at me like I was breathing in air to which I was not entitled.

The downside... the pool was freaking cold. It took a couple laps to warm up, but once I got going it felt great. I didn't push it today, only half an hour, and my shoulder was fine.

My knee, not so much, but I'll deal with that later.

We're at the point with the next book where cover art is bandied about, and links to possibilities are sent to me for consideration.

I got this a little while ago, one of four in the running.

It's a nice image. I like it. It would make a fine book cover.

Pick one. You've written two series. Pick the best one.

Why the hell does your brain think of these things?

I'm unemployed and only one of the kids is still at home. I was told to go amuse myself, so I'm bugging you. Pick one*.


*based on a real conversation, though not verbatim

I could not pick one.

Well, I could. The first series is long over with. Done. The chances of me going back to it are slim to none, not unless I have some weird vision while walking or biking again (which is how The Flipside of Here came to be.) If I'm never going to work on it again, that would have to be the one to let go.

Still. The idea of getting rid of it?

I've said before, I would really like to re-write the first in that series, and I would re-title it. The idea crosses my mind every now and then. But, it found its footing with a lot of readers and it seems like cheating. Not that I won't if I find myself with nothing else to work on someday. But probably not.

Wanting to rewrite the first book aside, the story arc is good and the characters are relatable. Each book was better than the last, and I really dug the last book. But if I had to choose, if a gun were held to my head, the Charybdis novels are the one I would let go.

Good thing I don't have to choose.

Wick is the one I would hold onto. It's been far more fun to write and the possibilities are endless. When you have a 400+ year old time traveling cat who can communicate with at least two people, every direction available is possible.

Do you want the rest of your career to be nothing but Wick?

Not necessarily, but it's not a bad place to be. There's an entire universe to explore, and I've barely scratched the surface.

Who knows, before I die, when the last book I ever write becomes available, Wick may be Ruler of All Things, the benevolent dictator of the galaxy.

Hell, maybe before then.

Sitting in Starbucks, trying to edit, but my brain cannot seem to focus right now, so I’m mostly people watching. So far I’ve seen one elderly nose-picker—and holy hell, yes, she ate it—one poor woman bolting for the rest room, bald guy with an eyeball tattooed on the back of his head, and I managed to upset a broflake when I bypassed the long line and mobile ordered from my table. That was nearly half an hour ago and he’s at another table, still glaring at me, probably because he didn’t think of it first.

Because nice clothing for fat women is hard to find, I ordered, like, $1000 worth of blazers online to try on at home. I had a weirdly good time doing that but am not as excited about it all arriving because then I have to pick something. And thank you Amazon for having Prime Wearhouse, which gives you a week to decide and then only charges for what you keep. I have spent more time surfing online for nice clothes this week than I think I did for all the Christmas shopping of the last three years. I hoped I would find something spiffy and a local store would have it, but across the board I got Nope, nothing in your size, hit he gym fat ass.

Okay, so I exaggerate. But seriously, even the major stores don’t stock what few plus size things they carry in their brick and mortar stores. Checking in a 100 mile radius yielded zero things.

I’m in search of spiffy things because apparently this is not appropriate wedding attire. Who knew? Spouse Thingy has it easy; he’s just going to Mens’ Wearhouse and getting fit for a suit already picked out for him. I need a Drag King Wearhouse, someplace where I can go get fit for a nice suit that doesn’t look too butch, and then buy one in neon pink.

That’s not too much to ask for. Right?

Upset Random Dude is now on his phone, yakking, and not using his inside voice. And he’s discussing peeing. I think it’s in a medical context but I really don’t care.

The eighth book in the Wick series (third in this leg of it) is in the editor’s hands, and the beta readers liked it well enough, AND it’ll head to formatting as soon as the Battle axe is done telling me everything that’s wrong. That’ll be 8 books in a tiny bit over 2 years. I am normally not a fan of pumping books out that quickly, but there were hundreds of pages of notes and it was literally years in the making.

There are groups of authors who play online and sit back and discuss rapid release strategies as away to increase sales, and it works for a whole lot of people. They release a book a month, roughly, and they supposedly make money. But…yeah, I’ve read a lot of their books. And, no, I’m not selling my barely polished vomit draft to anyone.

I don’t pretend in any way, shape, or form to be a superlative writer. I write literary junk food; I know it, and I embrace it. It’s what I enjoy reading. Quick, absorbable, fun, wordy hot apple pie or triple layer chocolate cake. Pizza. It’s not perfect by any stretch. It won’t win any awards. But it’s fun as hell to write and to read, and yes, I often go for an emotional gut punch at least once in a book. But I don’t think I’ll ever be the writer why types “The End” on a first draft, typo-hunts and thinks that’s editing, and then uploads it to Amazon three weeks after the first words were written.

I break a hell of a lot of the rules, but editing isn’t one of them. I’ve had horrible editors, good editors, and outstanding editors…but I’ve had editors.

Max and I are still mulling over starting a Patreon account. Mostly because it’s a place we could, theoretically, share work-in-progress and offer sneak peaks and have things somewhat protected. Also…we can blog there and say what we really think. LOL

There’s a couple sitting not far from me, sharing a tablet to read from. She’s standing behind him, not sure why. I’m pretty sure she could see it if she sat next to him. But it’s kinda cute, they’re older, and she’s resting her head on the top of his head.