I have not yet bleached my hair, the first step in neon green with several colorful stripes, though I had planned on having that done by now...mostly so I didn't get my head shaved with lots of stains on my scalp.

There have been two cases of COVID-19 of unknown origin that popped up here in the last couple of days, and people are, understandably, on edge about it. Granted, I'm not quaking in my boots, but I accept that it's out there and it's going to get worse before it gets better. But because it's out there and spreading, a lot of events have been canceled, and I'm waiting on dyeing the hair to see if St. Baldrick's will happen or not.

As far as I know right now, it will. But just in case, I'm waiting on the hair dye until shortly before the event. I'll wind up with scalp stains, but I can live with that. And I'm really hoping it's NOT canceled because...hell, this is year 7 for me and I've raised more than my goal, and as much as I don't want to be bald I do want to go.

Also, I want my freaking t-shirt.

Max is 99.99% better...no real limp, though every now and then he steps carefully, like he's testing his weight on his paw. We were able to avoid a vet visit, which is traumatic for him, so hopefully that's it until his next checkup. due in June, I think.

Three weeks to St. Baldrick's. I'm still doing stripes in my hair, one color for every $10 donated, donor's choice (there's a post on my FB fundraising page, you can leave your choices there) but I had a huge donation with the caveat that I show up in neon green. Neon shirt, neon jeans. I shot back: toss in more and I'll show up in neon green shoes, too, my hair mostly neon green, and even undies.

Years ago, I stopped riding after I passed out while on the bike. I had some serious issues with reactive hypoglycemia and frankly, was a bit afraid to ride and have it happen again. Then came the neon pink electric, which gave me a sense of control over the matter--if I felt like I was in trouble, I could crack open the throttle, not pedal, and get home quick.

Then came the string of other bikes, some still in the garage, some not. And the new one, the favorite, the one for which I have basically abandoned the pretty pink bike. I'm still getting comfortable on it, but I can ride about as fast as I did on the electric with the pedal assist set to level 1 or 2, my heart rate gets into the mid 140s, right where I want it, and I just dig the hell out of it.

But today...first time in a long time I've felt super not right while riding. At first I thought I'd pushed too hard right out the gate, so to speak. Then I thought I was just overheated, and headed home to leave my track pants in the garage. That helped, but something was still off. I wasn't done riding, though, so we headed home in search of Lifesavers, just in case it was my blood sugar.

No Lifesavers, but a sample pack of Jelly Belly Jelly Beans. I chewed those up, swallowed, and we went back out...where I suddenly felt great. I struggled through the first five miles; the only thing that made me stop at 10 was a sore tushy.

I wear padded bike shorts, but somehow on one side the padding shifted and it was my inner groin against the seat, and that freaking hurt. But 10 miles was good enough, and the first half reminded me that I still have issues and I damn well better pay attention to them.

Probably won't get time tomorrow, but I think I'm putting a new saddle on that bike. I've given the stock saddle a couple hundred miles and it's still not great, and I have two in the garage worth trying. A Selle Italia and a Terry Butterfly. So, we'll see. I'm not sure how much effort I want to put into a bike that I'm surely going to upgrade in a few months.

We're in the home stretch of the first book of Wick Shorts. There's still some editing to do, but cover art is in the works. And unless there's a last minute hiccup...new publisher. Yay.
Posted by Thumper at 2/18/2020 07:12:00 PM 2 comments:

Today's plans kinda flew out the window. I did not jump on my bike, head to Starbucks, where I then pounded out a best seller.

Instead, I stayed home, keeping a wary eye on Max, who was limping badly.

Yesterday, he had a tiny limp, as if he had jumped off the bed or sofa and pulled a muscle. It didn't seem to bother him, but I made a mental note, and when he was curled up on my lap I checked between the pads on his feet to make sure there was nothing jammed up in there. He has, a few times, wound up with clumps of dried litter that make him walk funny, and I hoped that was all it was.

Today the limp was more pronounced. He ate enthusiastically, though he requested a different morning snack because what I offered was not acceptable. So...perfectly normal.

Still, I felt like I needed to be here. He curled up on his bed under my desk, and stayed there. By the time lunch rolled around and he hadn't gotten back up, I went to check on him. He grunted, sighed like I was annoying, and went back to sleep.

An hour later I opened a can of cat food because Buddah was howling, and that drew Max out. He ate happily and went right back to bed, but it occurred to me that I hadn't seen him drink and he hadn't gone to the litter box. It also occurred to me that I often didn't see him do that in the afternoon, but...

He ate again after the Spouse Thingy got up. We turned the fireplace on early, which I knew would draw Max into the living room where I could actually see him. He slept just fine, but by then I was obsessing...I wanted him to drink. The Spouse Thingy took water to where he lounged, and he drank some. Quite a bit, actually.

The whole time I told myself that I was overreacting. Other than the limp, he seemed fine. Eating, drinking, peeing... But it was bothering me, because a guy that old, what might a limp mean, if not a pulled muscle? My brain was already racing ahead to tomorrow; the vet is closed but there's an emergency clinic 10 miles away. I was fully prepared to haul him in if it was worse.

Then came night snack (yes, he eats 5-6 times a day) and he wandered into the kitchen on his own, I watched him walk and thought his right front foot looked a little different than his left, but it wasn't swollen. I put the food down, he dug in, and then in one horrible flash, I remembered.

Thursday while I was scooping out his afternoon snack, he got underfoot.

I stepped on him.

He didn't scream, just gave a tiny WTF yelp. I didn't STEP on him, just felt my heel coming down on his foot; I stopped before I really stomped. It didn't bother him enough to run and he inhaled his food, as if nothing had happened.

But I did step on him.

He finished eating and then sat back to look up at me. I apologized, because that has to be why his foot hurts.

He was not impressed.

Before I could pick him up, he turned and started walking away. Still limping, but determined. He went to the back of the house, where there's another desk to nap under, and I got the message.

Leave me alone. I'm not dying; it's just an owie from your giant boat-foot. 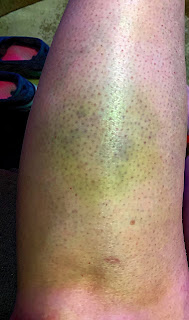 This was a bit of an ouch. My shoulder feels like this though I don't see any bruising. My hip is not happy. My right index finger is a lovely shade of purple today.

All because two days ago I tried to roll up onto a sloped curb (think end-of-driveway thing), one I've gone up a couple hundred times before, and had just the wrong angle.

I landed hard on my left side and apparently my shin took the brunt. Nothing is broken, but when I walk it feels like sandpaper going over a sunburn...even without pants on. It hurts to move my left arm and sleeping on it has been iffy, but...

It's really not too bad. I couldn't ride yesterday and decided it was probably not in my best interests to ride today, but tomorrow? I'm getting on and taking the long way to Starbucks, where I will do some rewriting and editing to the first 5 Wick Shorts, and then take the long way home. 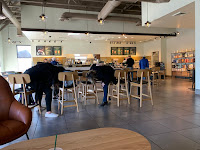 Oh, and they remodeled my Starbucks. It's nice and bright now, but not too bright. The tables are too small, but the barista mentioned the table tops will be changed from the tiny round ones on the floor right now to square ones this weekend, and if they do that, I'll be happy.

I really liked the way it was before, but this is nice.

I mean, it's not like they'll change it back just for me, so I have to get used to it. But still, it's nice. 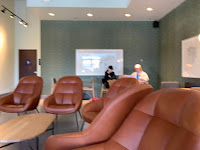 And the new comfy chairs are a lot comfier. As long as you're not trying to balance a computer on your lap to furiously type out your new next bestseller...

Oh. My goal for tomorrow...check to see if the bathrooms were remodeled, too.