This is the last day of the ACA DetermiNation Classic Ride; I have ridden my final ride for this, and I have to say, I am happy enough with my mileage. I am also kinda kicking myself (but not really) because I fell a bit short of a second goal set three days ago.

This was a virtual ride in which participants could select either per-determined race mileage or set their own; I decided to set my own. 200 miles seemed doable; if not for months of not riding much at all I'd have shot for 300, but I haven't been doing much and I knew better.

I hit 200 on the 13th, which was the 6 month anniversary of Max's death. I miss that little shit--I miss both of them--but he was not just my writing buddy, he was also the engine behind a lot of my fundraising efforts. Hitting that mileage on that day wasn't significant to anyone but me, I realize that. But it did matter to me.

Both of my parents went through cancer treatment, kidney cancer for my dad, lymphoma for my mom. My grandfather died from kidney cancer. I have several friends who are currently in treatment, many more who have survived. A few who have not. And both Buddah and Max were lost to cancer. Hank the dog probably had cancer--the vet felt a large mass on his spleen--but we'll never know for sure.

This cause matters to me.

On the 13th, after hitting 200, I considered the notion that 250 was not out of the realm of impossible. That was a smidge over 16 miles a day, and I can do that.

I did not do that.

I finished  few short, 240 miles done between April 16 and today...and I am not unhappy about that. There were a few days of not-riding when the Spouse Thingy took a week off work and we went off to do some fun things we hadn't done in over a year. We went to the Crocker Art Museum. We hit up the flea market for the first time in at least 5 years. We wandered around Costco just for the hell of it. And we ate out waaaay too many times.

We also played an insane amount of Animal Crossing and did a whole lot of nothing when it suited us. 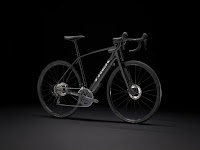 And as a surprise to no one...I also bought a new bike, which really spurred me into getting the last 100 miles done.

The pretty orange bike I ordered last September was supposed to be here in time to do this ride, but it's been pushed back to January 2022. I was not surprised by this, nor upset, because it's a casualty of COVID...so many people bought bikes at the start of the pandemic and then ordered bikes they could no longer get in shops, that a domino effect began. The delay is because so many people are getting into cycling, and that's a good thing.

I was willing to wait, but then this bike popped up in a shop in Sacramento, and despite not really wanting a black bike, I jumped.

Turns out the black has shiny flecks in it, which makes it totally all right.

I have not canceled the order on the orange bike. Because of reasons. Who knows?

And meandering way off topic. Which was I finished the DetermiNation ride, did 240 miles, and y'all donate a whopping $2000+!