With the exception of St. Baldrick's, every charity event I signed up for this year was either canceled or turned into a virtual event. No complaints, I understand and respect the decisions, and if they'd been held, I wouldn't have gone. I was surprised StB went on and up to the last minute expected news that they weren't going to hold it, but it was before everything shut down and there was no social distancing. Just...don't shake hands. Tap elbows.

I wanted something to take the place of those events, though. Yes, sure, I could have just made some donations here and there, and that's fine, but I felt as if I needed to do something.

Then friends signed up for a virtual Blue Ridge bike ride raising money for food insecurity in the Carolinas, and I hopped onto their team, made a donation, and began pedaling. 475 miles, and finished this past weekend. We also registered for a Tahoe to Malibu 700 mile virtual, and for this one I donated a couple hundred to the Sacramento Food Bank. That one might become a regular donation because...food.

I also lucked out in stumbling across the Great Cycle Challenge, raising money for the fight against children's cancer. I (perhaps too ambitiously) set a goal of 300 miles, and start riding that one September 1st. I'm doing it with my Blue Ridge and Tahoe to Malibu teammates, Jeni, Dean, and Michelle, and while we're all riding in different locations, we can track each other and cheer each other on.

I may have bit off more than I can chew with the 300 miles, but I'll figure out a way to get it done. And I know that's a very low threshold for a lot of riders who do that in a week...but I am not that rider. I am slow and more of a 200 mile a month person, I think.

But before that ride...I found one for the Michael J Fox Foundation, raising money for Parkinson's research. This one hits home: my dad had Parkinson's, and he died from it. So on August 29 (three days after my bday! woohoo!) I'm hopping on my bike and cranking out 20 miles, regardless of the heat (smoke in the air will drive me inside to ride on the trainer, tho...)

And in October, we're still walking for Pledge the Pink, but this time at home. 30 miles over 3 days, super easy.

Still...I think I need to find a post-September bike event. There are a ton of virtual races out there right now so it shouldn't be difficult. And I'll make it easier...I'll share this to my FB page, and 95% of the ads I get after will be virtual bike events.

Life with him this last month has been up and down and up and down, and even on the good days, the stress levels have been high. Not gonna lie, my stomach has been tied in knots every damned day, mostly because we just don't know from one day to the next how he'll be, and every morning the worry is there...what will I find when I open the bedroom door? 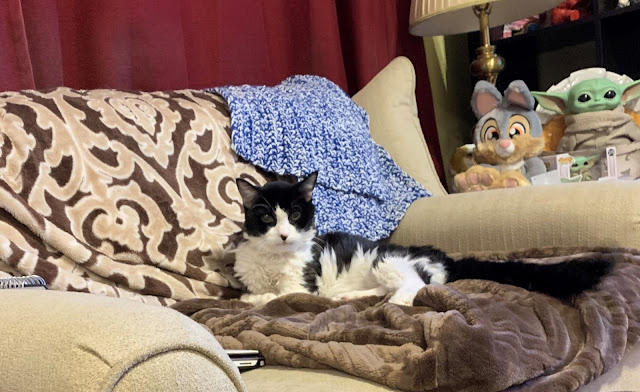 The last couple of days have been good for him, relatively speaking. He's eating and he's been getting on my lap, and when I peek into his bedroom he's actually sleeping and not staring off into space. If I peek in and he's awake, he talks to me and usually perks up thinking I've brought him something (oh yeah, some a lot of spoiling going on; we've been taking food to him in his room when he doesn't want to come out...) I don't want to pin too much on his good days because he is 19, he's lost a lot of weight, and he just looks rough.

We hope we've finally got his medication dose under control, which seems to have been his biggest issue over the last few weeks. If he's good with that, the rest is just him being an old, old man with kidney disease. He's not going to suddenly be the Max of even a few years ago, but happy and comfortable is a pretty good thing to shoot for.

This guy went in for his checkup last week. Whereas Max was proclaimed to be "feisty" for his checkup, Buddah is "a sweetheart." This is the same cat whose teeth have been buried in my arm. He'll bite me, he purrs for them while they're drawing blood.

Most importantly, he's healthy. Down to 13.5 pounds from nearly 17, but that was intentional. It was a little more than I thought it would be so of course my brain went to hyperthyroidism, but his labs were good.

And ya know, I sat down intending to write about something else, but...Max.

The last Wick Shorts book is beginning to pop up in online stores. For sure it's available on Amazon for Kindle and Kindle apps, which means it'll start showing up on other sites soon. Print, I'm not sure. Because of his condition the editor pushed to get this through, so the typical order went out the window and we haven't even seen a proof copy and probably won't until after it's been for sale.

This won't be the last Wick book, but we're taking a break to read a bunch of other books, and when we get back to work we're jumping forward a few years.

But this one...this one is a good capstone to the Wick Chronicles.