All right, so at the beginning of the month the Spouse Thingy helped me set my bike up for inside riding, because it's been too freaking hot to walk outside. I was all YAY because I could ride in my office and watch stuff on my iPad, and it was set up right where the air vent would blow on me. No heat issues! Huzzah!

So, of course, the air conditioner up and croaked. And it wasn't a gentle, replace-a-part croaking; it was a full on, have-a-memorial service-then-bury-the-damn-thing croaking. And because of the way our entire HVAC system is, it meant replacing the furnace at the same time.

Even then, it wasn't awful. It's not how we wanted to spend our money, but it was a lot less spendy than I feared it would be (thank you HGTV for making me think it might be $40,000 for both. It was not.) The only real problem was time...two weeks until everything could be installed.

So...fine. It was too damned hot in the house to get on the bike. It was too damned hot for most things, but I was able to get a portable a/c from Home Depot, so we were able to keep the living room at about 85. Not great, but not horrible. Because of the cats, we ran it even when we weren't home, because they're senior kitties and Max, especially, is vulnerable.

Then the portable peed all over the floor and soaked the carpet, and just made me 20 kinds of cranky. Still, it worked, and once we figured out the whole a/c-peeing thing, it was good enough. Sleeping sucked big fat hairy donkey balls, because the bedroom was 92 and even a fan did no good.

I whined a lot.

I also spent a lot at Starbucks, because they have a/c and don't mind me sitting there with my laptop for hours on end. I got a lot of work done (editor has the first Wick After Dark book...there are some for-sure rewrites that need to be done, though) and read a few books, and drank way too much tea,

But...but...but...heat outside and heat inside meant I didn't do a lot of moving around. Yes, we have a gym membership, but really, the idea of driving all that way when it's this hot was more of a pain in the ass idea than anything.

Then the a/c was replaced this week, and we have cold air again (and more efficient...places in this house that were always hot now are not, so, yay) which means the bike will be used.

In fact, I used it last night. And discovered the seat is really hard (really, my asterisk is just too delicate). And then discovered the iPad I want to use to watch stuff while I pedal away doesn't have a volume setting loud enough for me to hear over the sound of the tire spinning. And THEN discovered the Bluetooth on it doesn't work anymore, so my earbuds wouldn't connect.

I said a lot of HBO words.

Still, we have air, I have bike, all is good. 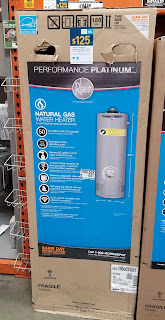 We are not waiting for it to croak. It's as old as the a/c was (went in when the house was built) and since Dixon has horrible water, we're getting it done soon. Probably a week or so from now. And if a new water heater proves to have the same increased efficiency as the a/c, we'll probably kick ourselves for not doing it sooner, since we can't get really hot water in the kitchen.

If anything else goes wrong...surely there's a celebrity out there who will draw attention to the Wick Chronicles and pimp if out, right???

All righty...back when I was fundraising for St. Baldrick's, I promised that if I hit a certain amount, I would post a video of me singing. And then I got sick, sounded like crap, and then...I forgot.

Last night, I remembered. So...you get the raw, unwarmed-up, unrehearsed vocals of moi. Presuming the video doesn't get yanked (tried to stick in on FB, they immediately pulled it, because of the music.)

Oh yeah, the music. Since I did this on the fly, I played a song on my iPod and sang along.

And why this song?

Well...once upon a time I bought my first iPod and created a playlist with, like, 15 tracks on it. All 15 were of this song. Because WHY THE HELL NOT??? I used to drive around in the convertible and sing along, over and over and over. Also, now you know where the Queen of Pacifica got her name.

Ok. The wondering of why someone would blame me for using Max's name is solved. But now I'm at fault for something else.

I can buy this. Stupid shit is super funny when you're drunk.

But, alas, peoples, I could not warn anyone about the horrors of the Fireball Hangover.

I've never had a hangover. 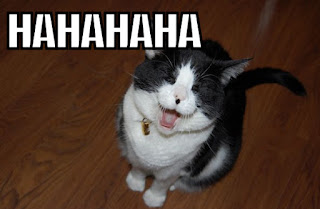 "What you're doing is wrong. Max has spent years building his rep and followers, and you're using his name AND his series' characters to launch your own perverted thing."

I have upset someone terribly, because I am writing a book based on characters created BY MY CAT, and thusly I am ruining his reputation. HE SPENT YEARS MAKING FRIENDS ONLINE, Y'ALL!

Yes, I am a horrible, awful, no good person for "borrowing" my cat's good name and creative endeavor to use as my own. And you know what? SOMETIMES I SPEND HIS MONEY! This December, I'm going to spend ALL OF IT on toys and shelter donations, and I'M NOT EVEN GOING TO ASK HIM.

But honestly, there's nothing really PERVERTED in the first Wick After Dark book. Unless sex itself is perverted. And a few f-bombs. Well, a lot of f-bombs. Teenagers spew f-bombs, who knew???

My horrible, selfish, awful self is still waiting on editor's notes, but she has made the first pass through it, just to read it, and it didn't offend her. She's super old, so, you know...she has sensibilities. Granted, they're that of a sailor, but still, she has them.
Posted by Thumper at 7/13/2017 08:37:00 PM 8 comments:

And it's not just walk training the heat interferes with. I kinda like a few other things, biking--and the pedal kind, not the motorcycle kind--is one of them. We bought a recumbent stationary bike a few years ago, without considering the fact that I'd replaced my recumbent road bike with an upright because of my lower back and hip issues. Yeah. I are teh dumb sometimes. The stationary bike just exacerbate those problems, so it went in a back room near the Spouse Thingy's computer and TV. 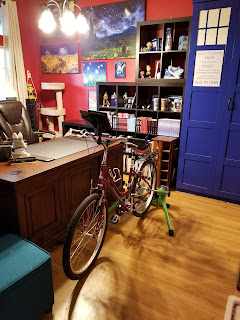 But because of the heat, we have this set up again. It'd be more fun to be outside riding, but that's not gonna happen again until them temps are under 75-80, so I hauled it inside, and with the Spouse Thingy's help got it on the green thingy, and I can ride it in here. This is gonna help the walking, too, I need the cardio work since I haven't been swimming as much (frakking shoulder...I would like a new one, thank you, but in a way that doesn't involve pain.)

(I would, BTW, give a bunch cash, some cookies, and even one of my Who toys to be normal and able to tolerate more than NorCal winter temps. I'm lazy but not THAT lazy that I'd actually prefer this to being outside.)

Once the bike was setup, I dug around in a closet and found a mount that I bought a few years ago; it clamps to the handlebar and holds an iPad, whch brings me to the real point of all of this.

What the hell do I want to watch on Netflix while I pedal the afternoon away? Amazon Prime is an option, too, if I can figure out how to get it working. I need a few binge-worthy suggestions (other than Jessica Jones, which I watched already. Or Sons of Anarchy, 'cause that's on my list but I haven't been in the mood for it.)

Pick your favorite, and leave it in the comments, here or at Facebook, which I'll link to the blog.

The Spouse Thingy and I have been walking, looking toward the 3 Day in November. Since the little town in which we live is flat and small and makes me want to poke my eyes out because I've walked so much of it so often, we're finding other places to walk. Last week, we walked around Six Flags--we don't get on the rides, we just walk and then eat tiny cinnamon donuts--and the next day we walked around downtown Sacramento.

It's a decent place for walking, as long as you start before the temperatures go up. We hit 6 miles and had to stop because it had reached 80 and I was feeling nauseated, because heat hates me and wants me to die.

We weren't the only ones there training. 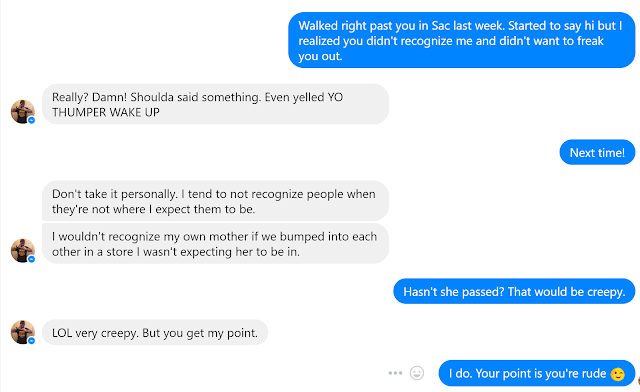 I walked right past a friend, another 3 Day walker whom I've known for 5-6 years.

Here's the thing... it doesn't matter how well I know you; there's a good chance that if we're in the same physical space and I don't expect to see you there, I won't recognize you. It's not personal. There are very few people I would know at a glance. The Spouse Thingy and the Boy, I think, but I won't guarantee anyone else.

And if you do tell me to wake up, don't be surprised if it takes a minute for my brain to engage. I really think my neighbor thinks I'm stuck up because we've run into each other in front of the cat food at Safeway a few times, and I had no idea who she was. If she'd been in her driveway, I would have.

Seriously. It's me, not you.