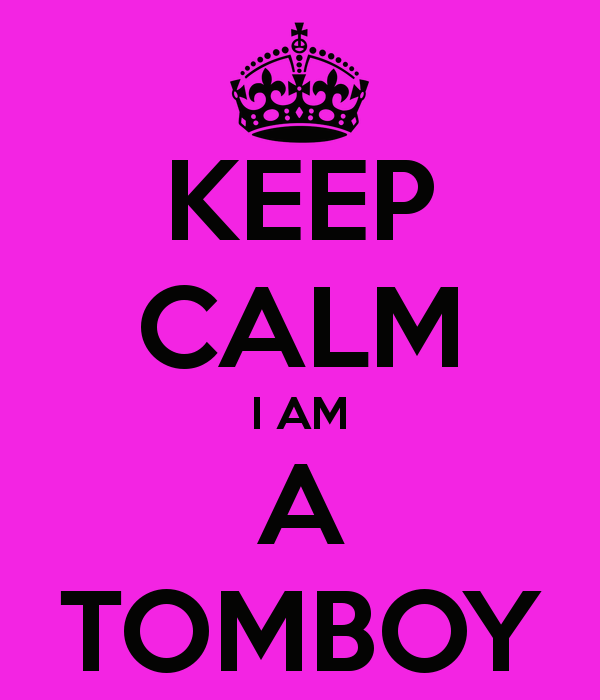 Not the ending to this weekend I expected...
At least this year I knew to expect my head to feel a little bit cold post-shave.

What I did differently this year was wait until just 2 days before to dye my hair. Last year, I think I did it 2 weeks ahead, but not being too sure how green hair would look on me, I opted to wait. After all, if I liked it, I could go green again later, right?

I should know better.

In any case, I got there nice and early, checked in and got my t-shirt, and marveled at how few people were there. The volunteers outnumbered the shavees about 15 to 1 at that point. It got better, but not by much.

Last year there were over 360 registered shavees. This year, 167. And looking at the list, only 140 or so raised any money, and most raised $100 or less and I'm not sure if any of them bothered to show up for it.

When I went to bed Friday night you all had donated $875; a little under my goal but over what I raised last year, so I was thrilled.

I got up and checked one last time, and 3 people pushed me over goal; $1075 raised...color me happy, even if I was green.

I had no idea how green at that point.

So I got there, checked in, Michelle and her mom were there for support and to take pictures, and away we went...the ad who cut my hair did the sides and back first so that I would briefly have "a really cool mowhawk" ad as she finished she told me that yep, I had a few stains. 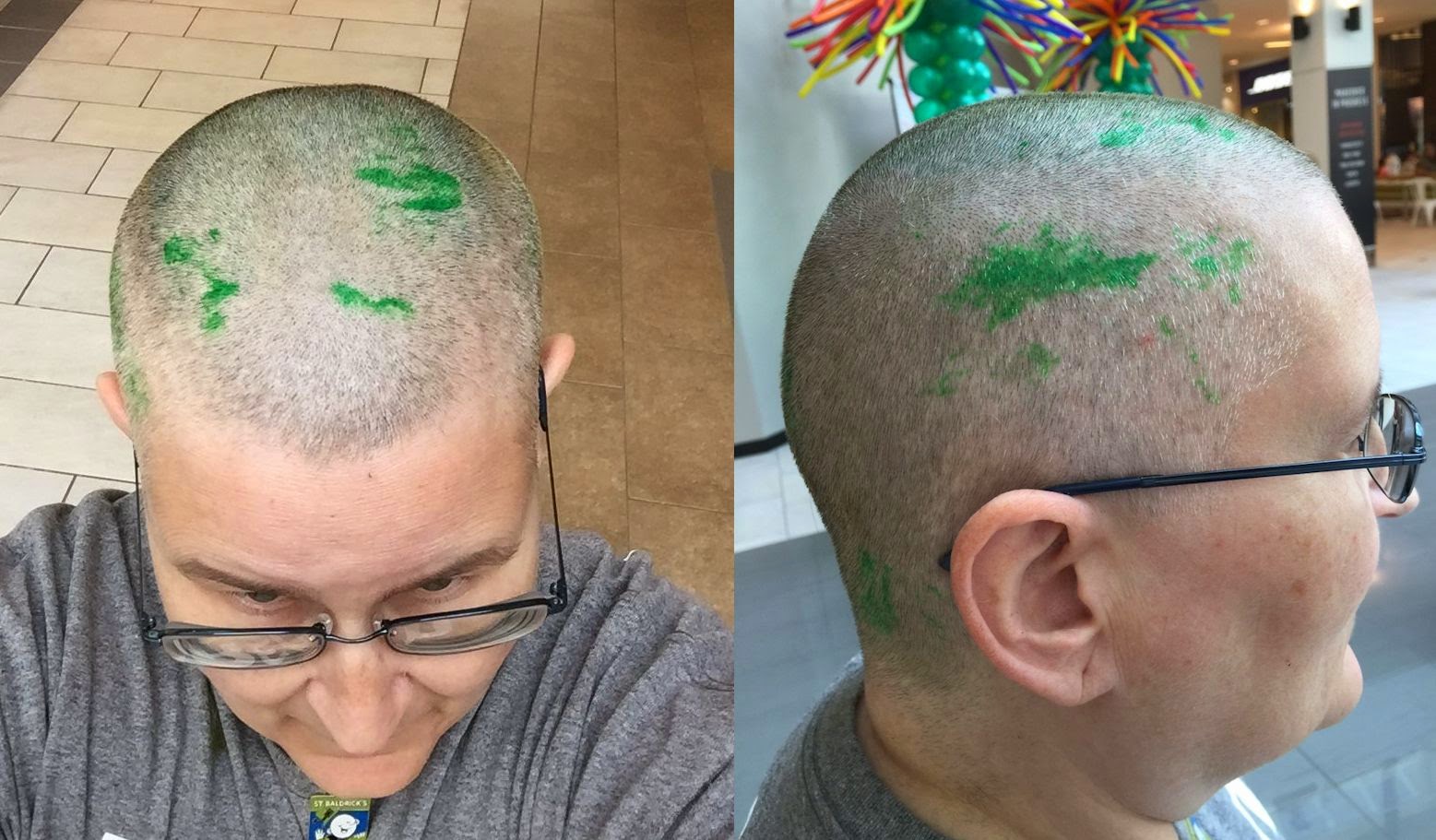 Good thing I brought a hat.

This...this is an attention-sucking finger-pointing, cringing sort of endeavor. People stare, whisper, mock, and not in a fun way. Some look sympathetic, thinking I have no hair because I'm the one that's sick.

I have to admit, while I can handle the reactions of the neon pink hair, no hair made me very, very uncomfortable.

This is far easier than what people in treatment go through. 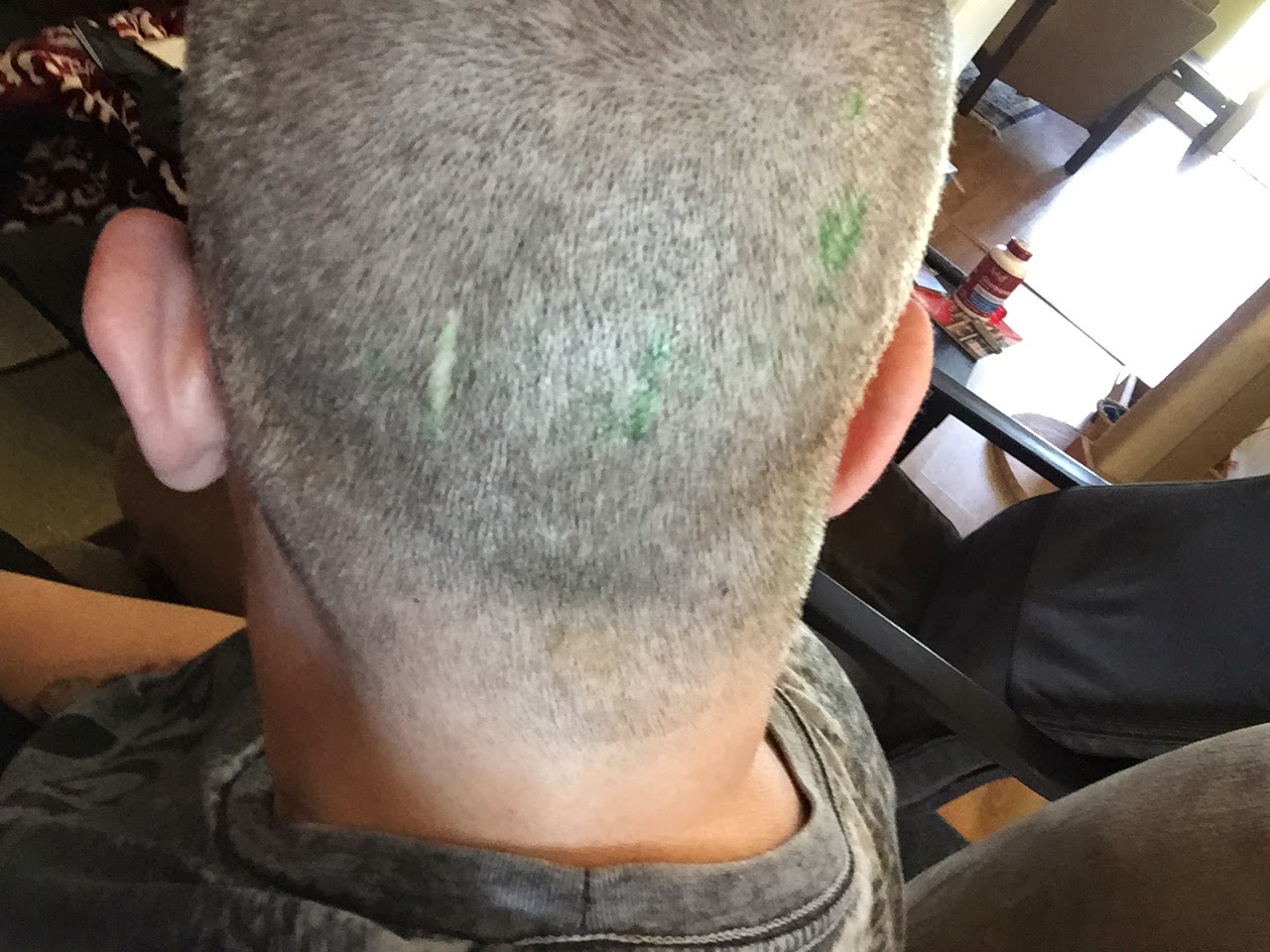 Besides, it also gave me this picture.

I wanted to see how bad the back of my head was stained, so I contorted myself to take a picture, and found myself laughing.

I didn't realize it was still so prominent.

When I was 5, maybe 6, I was sitting in a folding metal chair in temporary housing in Germany, in my Grandfather's room. He was teasing me about taking the chair and said he was going to sit on my lap...and proceeded to do just that.

Her certainly never intended to put any weight on my lap, but somehow it was just enough to upset the chair and I went backwards, right into the radiator under the window.

He scooped me up and sat on the edge of his bed with me on his lap, while my parents came running. He told me over and over I was okay, he was sorry, I was okay. And when my mother and father got into the room and I wiggled away because...MOMMY...he looked at his bright white dress shirt and said firmly, "Look what you did. You got blood all over my good shirt."

I stopped crying instantly. Oh holy hell, I got blood on Grandpa's shirt and surely I was going to get one hell of a spanking.

For just that brief moment, I thought he was actually mad.

But no...he wasn't mad. He was just trying to make me laugh, and the distraction stopped me from crying long enough for me to understand I wasn't really hurt.

For a long time after that, he teased that I owed him a new shirt. Get a job. You owe me a new white shirt.

For a long time after that, he kept checking the back of my head, hoping that scar would vanish.

I know he hoped it would, because even though we both knew it was an accident, he always felt bad about being the reason I cracked my head on the radiator. He felt bad even though I wasn't really hurt. He wanted that scar to go away.

But me? I'm freaking glad it didn't. Because I have that scar I have a touchstone to my grandfather, and he was a pretty cool guy.

Even if it is surrounded by green splotches.

Or, as Dean McCaughan put it, leprechaun kisses.

Not the best dye job I've done, but we have green... 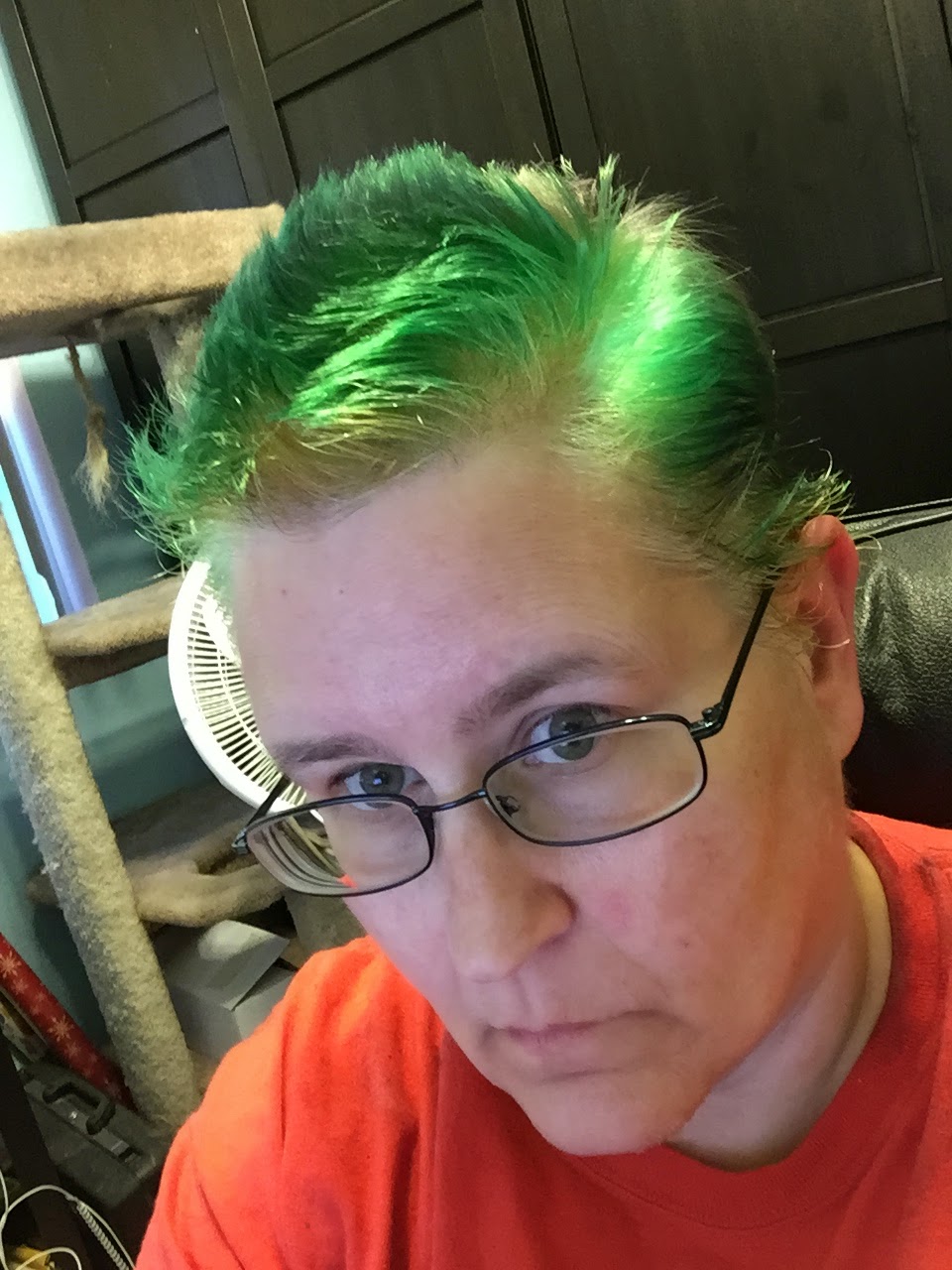 Oh, and I waited long enough to do this that for sure my scalp will be stained on Saturday when the hairs get shaved off. 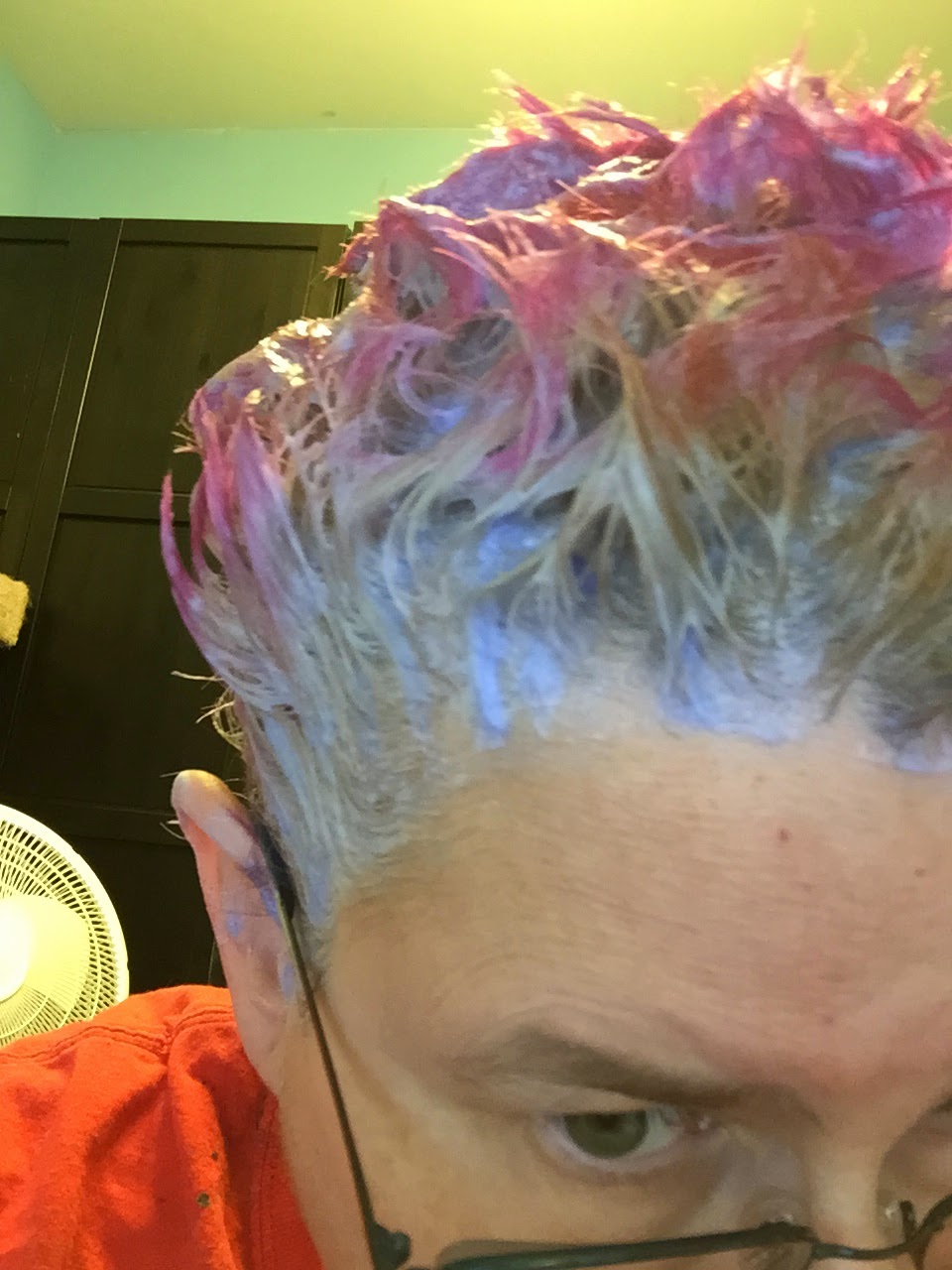 Yeah...I don't think that pink is going to bleach out. I suspect that when I wash this out, my roots will be near white and I will have killer pink tips.

This would be awesome, except in the next couple of days I need to dye it neon green.

Just 5 more days until it all comes off, regardless of what color it actually ends up being...but since I'm dying it this week, y'all have a good shot at seeing green stains on my scalp.

And yep, this is the last fundraiser mention I will do for this event on this blog.

Get your deductible here.