It looks like I was the only one who registered for St. Baldrick's this year at the venue I prefer...so they've moved me to another one a little later in the month. The problem I have with that event is that it's indoors, at a mall, and I refuse to step foot inside a mall until I'm fully vaccinated, and there's zero chance I'll even have my first shot by then.

So...it looks like I'll be doing a virtual shave. I still need to contact the event coordinator to tell her that's what I'm doing (and why) and beg to get my t-shirt regardless (because it's all about the t-shirt) but I am still doing it. But at least this way I also have a couple extra weeks of hair growth to shave off. The Spouse Thingy can man the clippers and we'll just do it in the back yard. We had to do it this way a few years ago when I was took sick to attend in person...well, I could have gone but that would have seriously been a dick move on my part.

The bike did not stay in Max's old bedroom very long. The weather is improving and I pulled it off the trainer so I can ride outside on my favorite bike (though the one is still hanging on the wall because it's freaking art.) Mostly...it seemed like a better idea to turn that room into something for both of us, not just me, something that would get used more than I would have used it for indoor riding (which will still be done, but next to the treadmill in a front room, where I had the trainer set up before.) 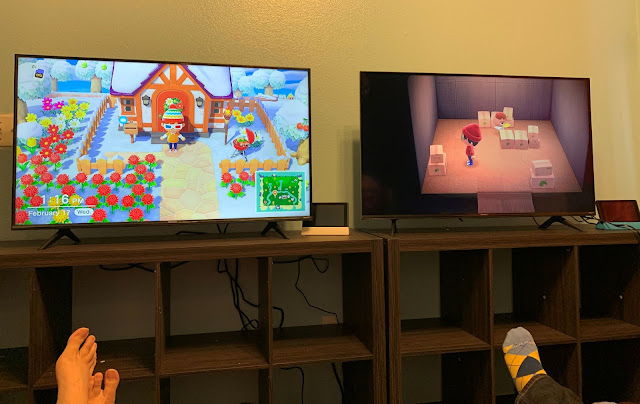 We've both developed a serious addiction to Animal Crossing. Initially, one of us played it on the TV in the living room while the other used their handheld Switch, but we're old and the screen on the Switch is kinda small. The answer clearly would have been to take turns, but we also discovered we liked playing at the same time, spending time talking and making fun of each others' player characters.

So we did this...set up two TVs in the spare bedroom, dragged two chairs in there, and thusly it became the gaming room, though right now the only game is Animal Crossing. I'm pretty sure that will change over time; we own other games and the way this is set up we don't have to play the same one at the same time.

Mostly...I really needed this room to not be Max's bedroom anymore. It didn't matter if it was the bike room or not; I just needed to get to the place where I didn't look in and expect to see him there. I also still look to the top of the TARDIS closet, expecting cat ears to poke up, but there's not much I can do about that. We need the storage space, and I'm too lazy to paint it again.

Right after Christmas, like the day after, I started having some serious heartburn, and it escalated into some serious abdominal pain. I ate Tums like candy, and learned quickly that I cannot eat Tums like candy, lest it morph into making me think I'm heading into a bout with colitis. The worst of it woke me up every night, feeling like someone had plunged a hot knife into my stomach; I discovered quickly that eating helped the pain abate, allowing me to get back to sleep, which made the Spouse Thingy think I had an ulcer.

I'm stubborn. It took me far too long to admit I needed medical intervention; instead of making the Spouse Thingy sit on hold for half a day to get me an appointment, I messaged my doc through the portal system, and by that afternoon I had his opinion: hyperacidity, based on the symptoms and the fact that I had started to wean myself off Prilosec last year.

Given the stress of the last half of last year, I picked a bad time to try to get off that. He put me on Pepcid AC twice a day with Gaviscon as needed, and suggested that I try that for a bit and if it didn't work, then see him in person.

A week later...yeah, I think he was right.

But still...it was just another symptom of the last six months of 2020. I stopped doing things I enjoyed, at first because my focus was on Max and making his roller coaster ride a bit less intense, and then on Buddah, and then on Max again, but I just couldn't get back to those things. Without riding, I wasn't moving much, and we both indulged a little too often in foods we normally don't. Initially I think we were both pleased that we hadn't succumbed to the COVID 15...instead, we discovered the Grief 15.

I thought I was okay. I can barely talk about the cats without choking up, and the physical symptoms of being weighed down with that grief have pretty well convinced me that I'm not. I will be, but I'm not. I just have to let myself take the time I need.

Part of that was finding something I truly enjoyed, something different, and if it's a stupid video game that takes up far too much time, that's fine. We're having a great time playing it, and a better time playing it together.

Not having my old routine isn't helping anything, either. Most of my writing woes aren't tied exclusively to Max not being here, sitting on the arm of my chair, while I work. I was so used to hopping on the bike, riding anywhere from 5-8 miles, stopping at Starbucks for an hour or two while I wrote, then riding home, taking another 5-8 miles. I could get out and ride, stop somewhere to sit for a few minutes, and then ride back, but it's not the same.

Until then...I'm not going to beat myself up for not writing or riding as much. Though...I have noted lately that the story I started working on has taken better shape in my head. Enough shape that I keep thinking I need to sit down and craft a schedule: housework, write, play, ride, play, write, make dinner. Because if I don't start a schedule soon, it's going to be: surf online, play, lunch, play, make dinner, play. Which isn't bad, but...at some point I probably need to expand my daily tasks.