Tomorrow, I turn 60. Though truthfully, in my head I've been 60 for about four months; the Spouse Thingy is only four months older and since we're the same age for most of the year, when the calendar flips for him it also mentally flips for me. So tomorrow, really, isn't a huge thing because my brain got there a while ago.

Still. This was the year we were going to actually celebrate things. We had plans: travel to celebrate our birthdays, because 60 seems like a milestone kind of year. And with our 40th anniversary later this year, we were set to get me some fun drugs to get me on a plane, and go to Hawaii. Over time we scaled that back to going back to Disneyland because that seemed to excite us a bit more...but then we started looking into reservations and saw how much prices had hiked, and we noped right out of that idea.

This week we'd intended to head for San Francisco and spend a day or two...but then the Delta variant numbers started to rise and though we're both vaccinated, he's at the point where he should get a booster and I'm not especially keen on the idea of traveling anywhere when hospitals are overrun and there are no beds available. Yes, I realize we could have an accident closer to home and still wind up needing medical care, but still.

This is not an unreasonable fear or concern. I have, in the last two weeks, lost more than one friend because they had an emergency and were discharged from the ER to home because there were no beds available and no near hospital had space, either. One died from a stroke; the other from injuries sustained in a car wreck. Neither died from COVID, but they certainly died because of it.

It's kind of a wake up call. You can be critical and still sent home right now.

So. Yeah.We're just gonna stay close to home this week. We'll see what we do by the time our anniversary rolls around. It will depend on COVID, certainly, on variant numbers, and on booster shots.

And it's okay. We'll just roll it all over to next year and do something then. 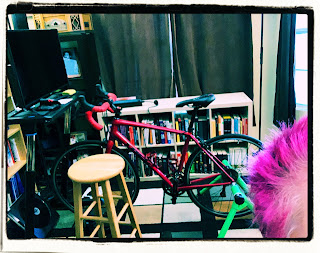 One risk I will take...riding for the Great Cycle Challenge next month. I'll stick to routes close to home at time when traffic is light, but if I have to, I have the trusty inside setup.

I know a lot of miles will be done on this bike, and while I sport the same ruffled bedhead pictured, because August is hot, there are still forest fires in NorCal that spew smoke this way, and I am a weenie. Riding up on a trainer is a bit more difficult for me--it hurts my back more than road riding--but at least I have a/c and a spiffy TV to watch while I sweat and swear. 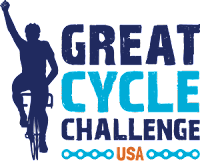 One day I'll spring for a smart trainer and a better bike to go with it, but for now the dumb setup works (I still have the spiffy orange bike on order but I'm not so sure now that I'll actually buy it. We'll see) and I'm mostly ready to roll.

The idea of 300 intimidates me a bit despite doing it last year.

I was in much better shape last year. Quite a bit lighter, too. That's my own fault; I ate my feelings between late September of last year and April of this year and it shows. Yet I don't regret it--I was seriously wallowing in grief and didn't feel like paying attention to the quality of food I was eating, didn't feel much like riding, and knew it was just a matter of time.

Oh, hey, if I mounted the electric bike up there, I could probably knock out that 300 in a week...

(No, I will not. I don't think it's possible. Maybe. In any case, I don't want to destroy the rear tire on that bike, and this trainer will chew it up.)

((Though I might be that lazy and now am curious if it would fit without an adapter.))

(((Okay, fine, I am going to slide down the Google rabbit hole and find out, because now I need to know.)))

Komen popped up with a new event a while back, and I jumped on it. It's virtual, on a bike, and 100 miles to be done throughout August.  I knew I'd finish before the end of the month and assumed I'd tack on an extra 100-150.

I finished the 100 by the 11th, which is good, because on the 12th... We got home from a memorial service for our DIL's grandfather (whom you should be jealous of not knowing, because he was an amazing person. 21 years a Marine, two tours of Vietnam, and a very open and loving person...I liked him from the moment I met him, and treasure having known him at all) and I sat down--promptly throwing my back out.

Good news...it's already feeling better and I *think* I can get back on the bike in a day or so, but I'd planned on a 50 mile weekend. Inside. In front of a TV. With a fan blowing right on me. Because I'm tough that way.

Next up, the one I most look forward to, is the Great Cycle Challenge in September. This one raises money for the research and treatment of childhood cancers, which is a whole other animal than adult cancers.

I set a goal of 300 miles, same as last year, but barring injuries, I have hopes of surpassing that. Since things are opened up now, unlike last year, and I'm vaccinated, I think hitting 350-400 is doable, because I'll have more options to take breaks. Last year it was a matter of riding what I could, going home for a break...but once I was home the discipline to get up and go out again vanished. If I'm out, I still have to get home, which means additional miles.

The only hiccup in getting extra miles in is the Spouse Thingy put in for time off for my birthday, and we may actually go do things unrelated to cycling. Fun things. Maybe. We're keeping an eye on COVID numbers and while we've both been stabbed, that doesn't mean we want to risk picking up the Delta variant.

Sure, the odds are that we wouldn't get sick enough to require hospitalization, but we could pass it on to someone who hasn't been vaccinated. Or a kid who isn't old enough.

We've talked about going to San Francisco and a few other things, but if the numbers go up, we'll probably stay home. And ride.

Maybe even work... I got 100 pages deep into a manuscript, but may start over. The storyline shifted on me, and if I let it go where it wants to go, those 100 pages won't work.

Tell ya what, it's a lot harder to work on Wick things without my furry little writing buddy, but I still hear his voice and I don't think the tone will change.

There's the rub about hitching your career to the wagon of a pet...when they go, you lose not just your treasured buddy, but your professional voice. It took me a while to find it again, and during that time I questioned whether I wanted to keep at it or not. I considered moving on with something else, but... there are still those things "we" had planned, and I don't really want to let them go.

Just a hint...I'm gonna be a tiny bit mean to Hyrum. The one who deserves it the least.

Hey, according to a large number of people, I'm going to Hell anyway.

If I don't get any work done, it'll be because I'm still basically addicted to Animal Crossing and started a new island. With 3 active players and 1 who only exists for reaping his money tree. That takes time, y'all. Who can work when there are villagers to gift every day, fruit to pick, land to terraform, and fish to catch?