Ok, so I'm not doing the 3 Day this year. Too many other things popped up and there was no way to train and raise funds, so maybe next year. This means (unless we suddenly decide to go somewhere) I'll be home all month.

So. I'm definitely doing NaNoWriMo again this year, even though it feels kinda like cheating. 50,000 words in a month is about a third of what I normally write, but what the hell. I've got a book to write, so I might as well get part of the vomit draft done during November. The story has taken rough shape in my brain, but I don't have an outline or plethora of notes, so I'll mostly be winging it.

This should be fun.

Also, right now, I'm a little bit drunk and I'm trying to catch typos as they occur, but if I miss them...that's why.

I may also attempt NaNoBlogMo. That's the one thing that super suffers when I'm on a writing tear--I get the writing I need to get done, but not much more--but the blog languishes Posts might be short, but I'm gonna try.

Ohhhh...and a few people have expressed concern that the Wick Chronicles were over with "Jump," but I promise they are not. Jump ended the way it did because I wanted to move it forward a few years, but there's more of their story to tell. Lots more.

You want friends, don't you? No one likes tomboys.

No one will like you unless you lose weight.

You have to do the right things to get people to like you.

I'm sitting in Starbucks, scratching out the very beginnings of a story. It's been quiet in here; I got my favorite table and decided that I'm camping out here the rest of the day to enjoy it. Other people have come and gone, but twenty minutes ago a couple sat down at the table next to me and two minutes into their conversation I'm jerked back to eight years old.

They're discussing, I assume, their child. Why won't she conform to normal? She's ten years old already; she should have outgrown the whole tomboy phase by now. And honestly, if she gains any more weight, her social life will end.

They're not being snotty or condescending; they're genuinely concerned. Their daughter is on the cusp of being--they assume--a social outcast. Puberty is looming; she's rapidly approaching the age where appearance matters to her peers. She hates dresses. She wants to play basketball and take karate lessons. If she keeps going in that direction, she's going to be friendless and miserable, and the idea breaks their hearts.

You're going to wear a dress to school every morning. I'm tired of you looking like that.

Her pediatrician says she's on the high end of the scale, but not overweight, not yet. But Mom can see it coming. And when it happens--not if--she'll be miserable. Kids are just mean little things. And how can she get on the basketball team? She's not quick and not athletic at all. She'll wind up riding the bench and watching as the sport she wants to participate in goes on without her. Those kids will mock her.

You're not a boy. Stop acting like it already.

And the karate? She'll last a week at the most. How many little girls really want to fight little boys all the time? How will she learn dignity and grace doing something like that? Dad thinks he can teach her to defend herself, but will it even matter? If she doesn't change, she's not going to wind up in the positions where boys will take advantage of her. He certainly wouldn't have looked at her twice when he was  young.

You'll never have a boyfriend if you don't do things to make yourself pretty.

Mom doesn't know what to do. Their daughter is stubborn; they can keep her out of basketball and karate, but they can't force her into doing something to make herself look better. They can stop a few things in their tracks; she wanted leggings to play in because her friends all have them, but God only knows how much teasing that would have invited, a girl like her in skin tight things.

Fat girls aren't pretty. That's just how it is. If you want friends, you'll do something about it.

I wanted them to look over at me. See the horror on my face. I wanted to open my mouth and warn them: keep it up, keep telling her she's less than you want her to be. Keep picking at her clothes and her weight and her interests; keep doing that, if in five years you want a teenager who doesn't trust you; if in twenty years you want those words to echo in her head like a scream in the night; if in thirty years you want those feelings to stab her in the heart.

Keep thinking along those lines and say something, because she'll hear you and she'll swallow it whole, and for the rest of her life she'll be embarrassed for the people who do like her, who love her, who cherish her, and she'll never quite feel like she deserves it.

Okay, so the whole rejoining of the gym thing just didn't work. I like the idea of swimming and when I'm in the pool I love swimming, but my shoulders do not enjoy it as much, and it's an outdoor pool heading into cooler weather. Also, their heater isn't being cooperative and I don't want nipples any pointier than they already are.

The big thing...when presented with a choice--go to the gym or take the bike out--I take the bike. And because the temps are cooling down, it means we can go on long rides without worrying that it's going to get too hot, and we don't have to get out the door at Stupid O'Clock to beat the heat. So, the gym membership is on hold until spring, and I'm gonna ride the snot out of my bike. 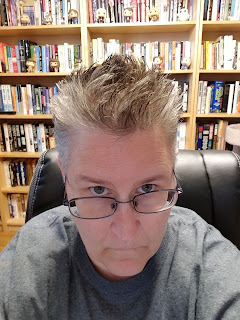 Not swimming really brings me to this.

It's been un-dyed primarily because I wasn't going to show up to my son's wedding with neon pink--or blue or red or purple--hair. Even though she never asked it of me, I promised the bride, no pink hair. And I joked that the day after, it was going pink, but...

Hair dye and swimming don't go well together. So I didn't.

Now that I can, I'm waffling on it. If I dye it, I'll probably keep dying it until March, when my head will get shaved for St. Baldrick's (oh hell yes I'm doing it again. I hate being bald, but it's for kids.)

My hair is thinning. I don't think the pre-dye bleaching is helping that.

But I dig the pink. Yet I'd also like to go purple.

This is how difficult my life is, guys. Do I dye my hair or act my age and not? You know, the super hard choices.

In other news, Max has been pre-gaming for tomorrow, when the new Doctor Who season starts. Tomorrow is a holiday at Casa de Thumper, and our asterisks are going to be planted in front of the TV starting at 9:30 or thereabouts. In the morning. Because they decided to have a global broadcast and evening in London is morning here, so...breakfast, then Who.

Yep, his life is hard, too.