You used to update the thing in the sidebar, your weight loss and I liked seeing it, it helped me think I could do it too. And your blog about it, what happened to that?

The blog was boring; I mean, if it bored me to write it, then it had to be excruciating to read, so I gave it up a long time ago. It's still there, somewhere, mocking me, reminding me that losing weight has been one of the major failures of my adult life (not quite as major has having gained the weight it the first place, but still...)

And the sidebar widget? I stopped updating it because I stopped losing weight. From July 2009 until December 2009 I dropped 50 pounds and felt great about it--and at that rate I thought I would reach my 85 pound goal by April or May 2010.

But then I just stopped losing weight. My calorie intake was the same, but nothing was happening. The answer was to increase my calorie burn, but even after training for the 3 Day walk, which meant getting my ass up every day and walking, as much as 50 miles a week, I wasn't losing.

Trust me, you want frustration? Have that happen. I ran an 800 calorie deficit most days, but the blubber stubbornly clung to me.

Then in December I wiped out on the Skki Trikke, and in the complete non-movement right after I gained a few pounds. That was expected; I really wasn't moving much, and then I threw my back out. I didn't increase my eating, though. But still, I gained.

There should be weight loss there.

Instead, I've gained about 15 pounds.

So no, I'm not updating the little chart in the sidebar. In fact, I took it down because it was like this thing poking at me and making me feel really bad.

I have a doctor's appointment in April and I'll bring it up, but honestly, my experience with trying to get a doc to listen when it comes to weight issues leaves me thinking I'll get blown off. I hope I'm wrong, but I have low expectations.
Posted by Thumper at 2/27/2011 11:03:00 AM 7 comments:

No, the book's not ready; the first draft and first pass through have been done. It still needs to be tweaked and edited, then the second draft (which should go quickly, given that the back story was pretty much established in the first 4 books.)

And the title? That's not changing. That's pretty much set in stone.

So why post a picture of a mock cover? To annoy the hell out of Char Murphy, who's been bugging me to read the first draft.

And why do I want to annoy her? Because she knows how tall I am and how much I weight, and used this knowledge to help her husband order this for me:

Apparently I'm doing the 3 Day in style this year.

Want to see reduce a Wabbit nearly to near tears?

Be in the room when she discovers that the first file of manuscript she's been working on for months--almost a year if you include the conception phase--is corrupt.

I fired the computer up to do some work this afternoon, tried to open the file containing part one and got the ugliest of error messages.


WORD CANNOT OPEN THIS DOCUMENT
FILE IS CORRUPT
Panic began to ensue. Yes, I have earlier versions saved, but I did a lot of work on it last night, some major revisions, and only saved to a flash drive. I tried opening it on two different computers with the same result: that file was dead.

Oh, and before what you're thinking spills out: don't ever suggest to a riter they can just rewrite something.

No. No they can't. What seems plausible is in fact a nightmare, and the second time around the words simply fall flat and any magic vanishes. The resulting mess is dull and lifeless and is, frankly, a gut punch to the writing ego.

Yet, I was sure that's what I was going to have to do: take an earlier version and try to re-polish it.

Trust me, that's worth crying about.

But...on a whim I sent Murf a text message because one of his best friends in a compu-genius and I hoped he would have something to tell me to do other than scream.

Less than five minutes later--literally--I got another text. Check your email; it was one corrupt line and he fixed it. He also suggested I get everything possible off that flash drive and then get rid of it.

Because I know you've been waiting with baited breath...


Behold...the first draft...
It probably would have been done day before yesterday, but I got distracted by some really beautiful weather and decided to take advantage of the spring-like days to take a few long walks. My timing was good, too, because the rain and wind has moved in, and it's not like there's a whole lot else to do while stuck inside.

Well, other than cleaning, and I'd much rather write than clean.

Oh, and there was frozen yogurt in there somewhere. After dinner but before, um, watching TV in bed while also playing with my iPad.

Anyway, even though the Spouse Thingy had today off, he had a CPR test to take and a Mom to go see, so I stayed home and finished the first draft.

And now the fun begins, wherein I read the damned book so many times that I start to hate it.

When I truly despise it, I'll send it to the editor and to a couple of beta readers. With any luck, it'll be ready for prime time in April or May.

I can see you twittering with excitement from here.

Or maybe you just have gas.

Slowly but surely, I'm getting to the end of the first draft of the book I've been working on. There are some gaping holes in the manuscript, things I did not write because I needed to have a better sense of how certain events would play out before addressing them, but by the end of the weekend I'm hoping I can go back and fill in those holes.

It's kind of like wood putty, but with words. Literary putty? Verbiage paste? Anti-white out?

Anyway, I'm getting there. But I've also been distracted by this: 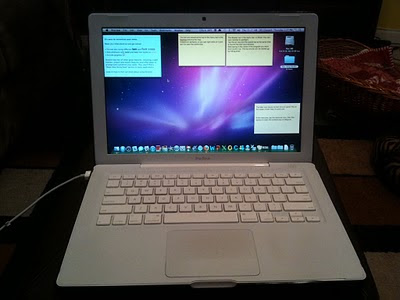 New-to-me Macbook laptop. I wasn't in the market for a new laptop, the one I have works perfectly fine, but this used system came preloaded with all the software I need for the publishing side of my life, and I've been in need of some serious software upgrades for a long time now. The main platform I use for manuscript formatting, Pagemaker, I bought in 2001 and I think that was the last time Adobe released any version of Pagemaker. The year after that they moved to InDesign, but I've resisted all these years.

This little Mac (and man it is REALLY little...) has the newest InDesign on it, which gives me a chance to play with it and to see if I have any hope of figuring it out. It's also got the newest Photoshop, Illustrator, and a ton of other things. Office 2011...which I'm kind of liking more on the Mac than I do on Windows.

In any case, I might have finished the first draft this week if not for the Mac distraction...

Totally different thing...why the hell am I sitting here with The Real Housewives of New Jersey on? I mean, I'm just waiting for the noon news to come on, but really, I feel about 20 IQ points dumber for the 15 minutes I've been listening to it...
Posted by Thumper at 2/10/2011 12:00:00 PM 5 comments:

I haven't been especially active in the last couple of months. Between wiping out and hurting my shoulder, then throwing my back out, well, I've done a lot of sitting here trying to not move too much. But now that the shoulder feels decent most of the time and the back feels fine, it's time to start moving again.

The thing is, my endurance sucks. I can still walk reasonable distances at an adequate speed, but I really do want to get into shape. I have the spiffy calorie counting thingy strapped to my arm all the time so I know what my baseline is and what my typical deficit is every day, but I need the cardio to add to that.

The best cardio thingy I have, the Street Strider. The outdoor elliptical machine that has kicked my ass in a major way. I ever get get very far on it before the weather turned and it was either too cold, too rainy, or I was just in no shape to ride it.

I bought a Kinetic Road Machine so that I can use it indoors (and for the record, I don't recommend doing this in front of a fire...) so that I can get some of my endurance back before taking it outside again.

Out of shape, I are.

I worked it in 5-10 minutes spurts, until I had half a hour on it, and later this evening I did another ten,

Buddah sat and watched, mocking me.

Once I get it up to 15-20 minutes nonstop I'll try taking it outside again, because that's got to be more fun than staying indoors being mocked by the cat.