I used to be okay with heat; now when it's over 75 I'm miserable, over 85 I feel like all kinds of krap. I would much prefer it be 35...at least then I can wear a sweatshirt and be comfy. And unless it's windy or raining, a sweatshirt is all I need unless it goes lower. Totally the opposite of how I used to be.

It's gonna make training for the 3 Day suck.

There are 198 days until the San Diego, so we really need to get our asterisks in gear and start training. If we follow the provided training schedule, we should be doing 3 miles or so a couple times a week; that's not a problem. Both of us can pound out 6+ without any problem, 10 if we push it. So I'm not too worried, but yeah, we need to get to it.

The suckiest part...I'm probably going to have to drag myself out of bed at normal people hours to get the miles in before it gets too hot, and I am not a normal people.

Forked, the third book in The Wick Chronicles, is out now in paperback and for the Kindle...the hardback has been sent to the printer and should hit distribution next week. Yep, we did it backward, because why not?

Yes, that's the royal "we" unless you count Max, which you totally should. 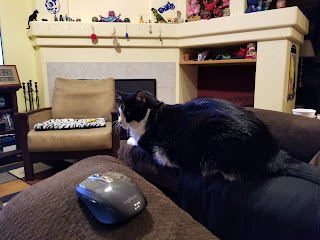