This is the post-book-sent-to-editor phase that I kind of don't like: what the hell to do with myself? I have a ton of things I could and should do--there are other books to be read, and the house looks like complete crap so I should get off my asterisk and clean--but I wind up sitting here doing nothing while I contemplate what to do. 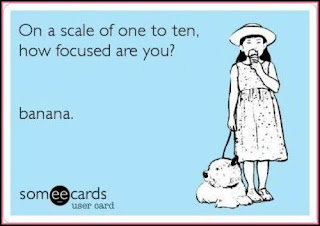 My brain is a little bit fried, I think. It keeps telling me that there's another week left in the month, even when I'm staring at the date in the lower corner of my monitor, or the one on the clock by the TV. I can plainly see that this is the last day of March, but dammit, April is a week away as far as my brain is concerned.

Since it's Friday, my brain is also telling me I should slip the laptop into my backpack and head over to Starbucks, where I can work for a couple of hours without all the at-home distractions. It's the start of my work week, I'm supposed to be at a table with a spendy cup of tea, trying to figure out what a six pound cat might say to a person who can clearly understand him.

I should clean the kitchen.
I should go to the gym.
I should take a long bike ride.
I should do laundry.

I have a stack of books in my TBR pile.
I have 100 pages of notes for the next book.
I have some pictures that need to be hung.
I have absolutely no idea WHAT I want to do.

So...I sit here with the TV on while I play online, because waiting for the editor's notes (and for the Spouse Thingy to proof for typos) renders me useless. Too many things to do, and a brain that can't keep track of the days much less decide on what I can do to be productive.
Posted by Thumper at 3/31/2017 10:31:00 AM 1 comment:

What I've learned this month: a kidney infection is the gift that just keeps on giving. The infection itself is gone, but it left reminders and  would very much like those reminders to go away.

If you've been reading this blog since the beginning, you might remember that I have diabetes insipidus (which is not diabetes. It would be more aptly called "water diabetes" where the type you normal think of is "sugar diabetes.) Basically, my brain no longer makes the hormone that tells the kidneys when to hold onto water and when to release it, and without medication they release it. All of it. 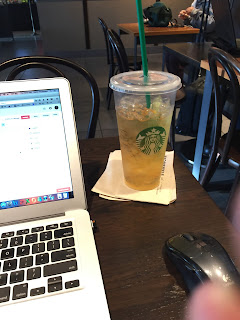 Unmedicated, my life is a constant drink-fest. The thirst is violent and unrelenting, and I can suck down a liter an hour...and wind up peeing every 15 minutes. The upside is that the meds control it quite well. I'm thirstier than the average person and I damn well need to know where all public facilities are, but I can function normally and generally don't have to get up at night.

When the infection hit, it was like I was going unmedicated. The worst part (after getting over the infection. That sucked) was having to get up 4-5 times a night. I have a tendency toward middle insomnia as it is, so after the 2nd time up, I was awake, and stayed awake for 2-3 hours. My sleep cycles was all wonky, and I was getting freaking tired.

The doc assured me it was normal; my entire urinary tract was inflamed, and it was going to take a couple of weeks to calm down.

I would like it to calm the frak down now. I would like to be able to go do normal-people things.

The upside, I suppose, is that I got a lot of work done. Since I wasn't really going anywhere other than Starbucks, I planted myself in my chair and got the second draft to the third Wick book done and sent to the editor, and if I feel like jumping right to the next while I wait for her input, I have nearly a hundred pages of notes for the 4th book (which will not be a Chronicles book...it will be a new series start, Wick After Dark.)

But if my kidneys start cooperating, I'm taking some time off to go do things, like hit the gym and take long walks, because in 8 months is the 3 Day, and I want to make those 60 miles my bitch.

What I won't be ready for is Tinkerbell. I have no endurance right now (we did 4 miles the other day and it was surprisingly hard) and there's no way I can meet the pace requirement. I have a nasty feeling that Tink will be another Avon walk for me: something I register for every year but somehow never make it to.

After the cold from hell and then the kidney infection, I got slapped down with another UTI. Or a continuing one, point is there were a lot of crappy things going on with my innards and I was starting to get really pissed off. I hate being stuck at home, and it was really starting to feel like not just being stuck, but stapled in place.

And then the Spouse Thing caught the cold, his reward for taking care of me when I felt really gross.

But, this weekend I felt normal--still a bit of a goopy cough, but that's may be allergies--so I went to Starbucks to get some re-writes stared. Max was patient while I felt bad, but he wants this book finished so that we can move onto the next, more adult one. For realz. He's totally into this.

Now, one of my worries about shaving my head every year is that I'm going to get mistaken for a guy--it's happened before--and violently thrust out of restrooms or the locker room. And before anyone says there's no way I would be misgendered, remember, I was hit by a little Asian woman repeatedly a few years ago because she thought exactly that: there was a man in the ladies room and she wasn't having any of that. 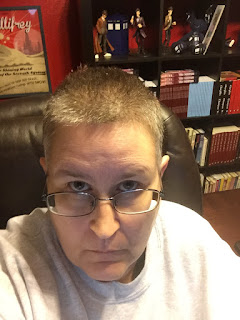 So far--possibly because I've only strayed out in the last 5 days--it hasn't been a problem. No one has mistaken me for a dude. well, with the exception of one guy in a Chinese restaurant, but he wasn't really looking. he glanced at best, and asked how we "gentlemen" we doing.

Twice now in Starbucks, after spending a few minutes chatting with women in line ahead of me, there has been an offer to buy my drink. Different women, even. Both times I was using free rewards, so I politely declined, and it was fine although a little awkward the first time, because I was taken aback by the offer.

After I placed my order and went to the hand-off area to wait, we continued to chat. She asked all kinds of questions. How did I like Dixon? What did I do? How much fun is having a Starbucks this big nearby? The whole time, I'm thinking "What a nice lady," because most people just aren't that friendly.

Then I hitched up my backpack because it was uncomfortable, and she noted the wedding ring. Then she asked me how long I'd been married.

When I said thirty-five years, there was a beat of quiet confusion, and then "Oh. OH! Well, I'm barking up the wrong tree, aren't I?"

Guys...not gonna lie, I was flattered as hell.

And now I wonder if the first woman offering to buy my tea thought the same thing. My ego kind of hopes so. I mean, I'm 55. How often do you get hit on when you're 55?

I can't even say I've still got it, because I never really had it.

Okay, this is about as long as I've had my hair since high school.
In the back, it curled over my collar.
Ignore the background clutter; we have a total white-trash backyard thing going. 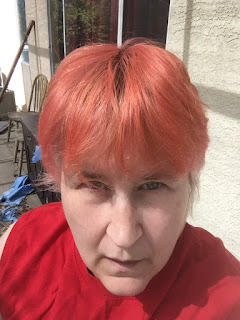 So of course, the Spouse Thingy had to do this... 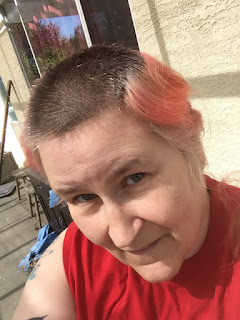 Which lead to this, which I should probably keep
to make a really bad wig for myself 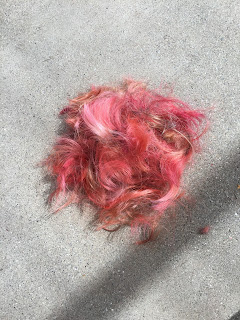 And we ended with this 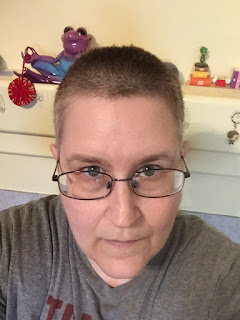 It's about as short as I could go with the clippers we have without going all the way to skin...which I would have done at the event, but we have super cheap clippers which would have taken some scalp along with the hair. I justified it (aside from that) because on the event, women do have the option of keeping a little hair. But mostly...I didn't want to bleed.

Next year...cripes, let me not be sick.

If not for how much it would hurt, I would totally get a scalp tattoo, like a giant smiley face, right on the top of my head, just to surprised whoever winds up shaving me next year.

Okay, so here we are three weeks after the cold from hell started; I worried that it would keep me from showing up for the St. Baldrick’s shave, and that worry was not without merit…but it also wasn’t what kept me home.

No, I stayed home thanks to a kidney infection that picked 10 days into everything to rear its ugly head. I woke up the day after my last post with wicked flank pain, and at the risk of TMI my urine was damn near white. So off to the doc I went, where I was prescribed an antibiotic for the infection and given the advice to stop taking the DayQuil and NyQuil I was using to combat the cold.

It was in my chest but not in my lungs, and he wanted to keep it that way. Ideally, cough that chit up, even if it meant a couple of sleepless nights. So I stopped taking it, took Sudafed instead, and wound up spending most of my day in bed.

The kidney infection was all kinds of fun. I went from feeling like I was freezing to sweating so hard I literally soaked my clothing, all within a 90 minute span, and it went on day and night through the weekend.

So I did not get my head shaved. Yet.

They are sending me a t-shirt, so there’s that.

Everything has greatly improved and I have only a lingering, goopy cough. My appetite, which eluded me for a week, has returned (why the hell did I not lose even a single pound? I DIDN’T EAT FOR A WEEK!) and I’m going out into public again. My endurance is still down a bit, but I don’t want to sleep all day anymore.

So. Likely tomorrow, the Spouse Thingy will fire up the clippers and buzz my hair. And as soon as I can—without coughing—I’ll make the singing video. Or hell, maybe I’ll do it now while I still can’t get 5 words out without hacking snot up from my chest. At least then there will be a clear reason for how horrible it’s going to be.