Clean black shirt, clean black shorts, so of course the cat with white fur decides life will not be any fun at all until he sits on my lap, rubs up against my shirt, and leaves a ton of evidence behind.
And once he's done that, he's done with me.
Because of course he is.
♦♦♦♦♦♦♦♦♦♦♦♦♦♦♦♦♦♦♦♦
We had a really rough weekend with Max, you can read more about it in his Ask Max column on Mousebreath. Short version: I did not expect him to be here Monday morning. And while he's okay now, Sunday night was super hard on him, and it just hit home with me that I am not ready for any of this, not yet.
We're trying to keep the mindset of one day at a time, and today is a good day.
♦♦♦♦♦♦♦♦♦♦♦♦♦♦♦♦♦♦♦♦
We're also asking ourselves what the hell we do if he dies at home on a weekend. When the time comes I would prefer he just drift away in his sleep, but what do we do with him if it's Saturday night and the vet is closed until Monday? We're not burying him because he's always been terrified of outside and it seems wrong. I want his ashes. But what the hell does one do with a body for 48 hours?
♦♦♦♦♦♦♦♦♦♦♦♦♦♦♦♦♦♦♦♦
Yes, it's morbid. But it's also something we have to consider.
♦♦♦♦♦♦♦♦♦♦♦♦♦♦♦♦♦♦♦♦
In a not as depressing mode...I've seriously started thinking about how to handle the 300 mile goal I set for September's Great Cycling Challenge. The obvious is 10 miles a day, every day, but I need rest days at least every 4th day. So then what, 10 three times a week, 15 three times a week? I'm not sure I can do that, either.20 five times a week? I know I can't do that.
I mean, I'll figure it out, but I think I may have set the bar too high.
♦♦♦♦♦♦♦♦♦♦♦♦♦♦♦♦♦♦♦♦
I had my first flat in a bazillion years this weekend. Changing the tube should have been easy, should have taken under 10 minutes, but I wrestled with that sucker for far longer than I care to admit. I could not get the tire back on. I know, you only unseat one side of the tire, but the tire had its own ideas and came all the way off and did not want to go back on.
I better hope it never happens out in the middle of nowhere. This was at home, so at least I wasn't sitting out in the blazing sun screaming at an uncooperative chunk of rubber.
♦♦♦♦♦♦♦♦♦♦♦♦♦♦♦♦♦♦♦♦
One day I'll either upgrade my current road bike and use this one to break things on so I can learn how to fix the, or I'll find the ideal beater. But I really need to learn more basic repair beyond changing handlebars and stems. I can take the back wheel off, though, so that's something.
(Yes, mock me.)
(Anyone can do that. I'm not sure why I was reluctant before. Probably because I wasn't sure exactly how the derailleur and chain were on.)

^HISS...or...I never want another flat ever again...^
Fine, so I felt accomplished over a stupid little fix to my bike. And it made a huge difference. I swapped the bike stems; yesterday I realized the tires were a bit low, pumped them up, and did my 15 miles.
I finished that ride (on the trainer) around 2 pm.
Last night at roughly 9 pm, as I sat here in my comfy chair, surfing Reddit despite my initial intention to, you know, work, I heard this sudden, very loud, click-hissssssss, as if a nest of rattlesnakes had spontaneously appeared under the treadmill and were very, very unhappy about being stuck there. Poor Buddah damn near jumped out of his skin but instead of running and hiding, he carefully crept toward the sound, which made me wonder if perhaps, something was under the treadmill.
But no...my rear bike tire had committed suicide.
It was dead, Jim. Very, very dead.

I was not going to change a tube at 9pm. I have spare tubes on hand because at one point I decided it was a good idea to have spare tubes on hand, but I haven't changed an inner tube in 25+ years, and the last one I changed was on a bike with wide, user-friendly tires and my gut said this was a little different.
Face it, 25+ years ago we shoved screwdrivers between the tire and the rim to break the bead, not worrying about rim damage because those suckers were steel and sturdy. It was brain-dead easy, but because of the width of the tire I expected it to be a little tougher, given that there's not nearly enough material to work with.
So to You Tube I went, where the good folks at Global Cycling Network have videos for pretty much anything you need, and I watched as Simon Richardson showed me how to change an inner tube on a skinny tire, and I was confident that I could do it. It looked freaking easy: pull one side of the tire back, insert tire levers, get just one side of the tire off--leave the other side--pull the old tube out, put the new (slightly inflated) tube in, then re-seat the side of the tire you've unseated.
Super.
No problem, I can do that.
So this morning, like a champ, I got the rear wheel off, pulled one side of the tire back, used my levers, got it off all the way around...and the whole tire came off.
Should be no problem, right? Just put that side back on as if I were installing a whole new tire.
Except it would not stay on. I'd get it in place, the new tube in, try to seat the other side, and off it would all pop again.
Fine, this side of the tire hates me, I'll do it from the other side.
The other side hated me just as much. The more times I tried, the more that entire wheel hated me.
I ran out of things from the Bad Word List to say.
I don't even want to count how many times I tried and failed to get that tire back on, but it took me well over an hour before I settled on a solution. And I sure as hell don't want to have to do this on the side of the road, like, ever. Not without a whole lot more at-home practice...which I will eventually do, once this bike is no longer my primary ride.
On the plus side, I don't think Buddah is going anywhere near the bike for a while, so hopefully I won't be dealing with as much cat barf on the trainer pad.
No, really, that little shit has gone out of his way to get from wherever he happens to be, just so he can hork onto the pad upon which my trainer and bike sit. And it doesn't just wipe up. No, I have to clean up his mess and then drag the freaking Spot Bot out to get it all.
Same thing with the treadmill, which he has so generously baptized a time or two.
So here's to hoping that explosive hiss was enough to keep him away from it for a while.
(I'm not holding my breath.)
Posted by Thumper at 7/11/2020 02:27:00 PM No comments: 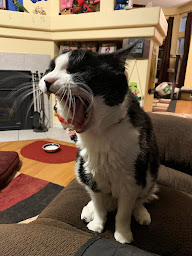 Odds-N-Endz #66.666^6
While I've got the next book 80% done (absent a few rewrites) I have not done a lot of writing in the last week or so, and apparently I have upset His Majesty, who was sure the editor would have it in hand my now.
He's also upset because instead of working, I rearranged the office and workout equipment again, which actually works out to his benefit--his bed under the desk is significantly more private now--but he was not consulted and, well, he's a cat. He's not happy.
If he's in a better mood, we'll get back to it tonight.
If he's not. Well, there's a lot of TV I could watch.
♦♦♦♦♦♦♦♦♦♦♦♦♦♦♦♦♦♦♦♦
This was one of the distractions. I freaking love this bike but have had neck and shoulder pain on more rides than not, and after more than 1100 miles on it, I decided I needed to be a little more upright. The easiest solution seemed to be raising the handlebars, so I bought a stem with a 35 degree angle (as opposed to the stock 7 degree) and installed it last night.

Stupidly, this little fix made me feel wicked accomplished. And it worked. I did a 15 mile ride on the trainer today and was relatively comfortable. Usually I start feeling pain between my shoulder blades at about the 20 minute mark and my hands hurt; today the only soreness was from the new position (different muscle use, I think) and it wasn't bad at all. My hands never hurt.
Hell, even my ass was happier.
♦♦♦♦♦♦♦♦♦♦♦♦♦♦♦♦♦♦♦♦
An oddity, even for me: I fell asleep easily last night. Turned the light out at 11:30 and was probably asleep by 11:40. That rarely happens.
So of course my brain decides I can't have it that good, and woke me up a little before 3 with the sound of a doorbell. It was so freaking real, but instead of wondering who would ring it at 3 in the morning--is there an emergency?--my first thought was "Did the Spouse Thingy order pizza?"
I got up to get a drink, and sadly, there was no pizza. He was watching TV, not eating,not hiding a cheesy delivery from me. I was kinda disappointed.
♦♦♦♦♦♦♦♦♦♦♦♦♦♦♦♦♦♦♦♦
And now I want pizza.
♦♦♦♦♦♦♦♦♦♦♦♦♦♦♦♦♦♦♦♦
There's the rub about riding more...I am freaking hungry all the time. Now I know how Max feels.
I did 15 today. Maybe ice cream is in my very near future.
Posted by Thumper at 7/10/2020 06:52:00 PM No comments:

Sweet. I wanted something to replace walking for a charity this year, something localish but not in a giant cluster of people, something that raises money for a good organization, and found a virtual bike event. 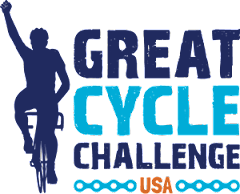 This one kind of fell into my lap, and it seemed like a no-brainer since its purpose is to raise money for children's cancer treatment. It's the Great Cycle Challenge, and I freaking lucked out that it was delayed this year, otherwise I would have missed it.
The GCC raises money for the Children's Cancer Research Fund, and I get to keep my hair.
Participants set their own mileage goals to be done in September, and my stupid brain said, hey, I can do 300 miles! I'm pretty much a 50 mile a week rider and this would add 100 miles onto that. 20 miles a day for 5 days every week. I was not thinking...
I mean I can change my goal, but I'm going to shoot for it anyway. By the end of the month my legs damn well better be like steel bands...
And the best thing! If I raise $2500, which I set as my minimum goal, I'll get a spiffy Spider-man bike jersey.

It was designed by the kids...hellz yes I want it.
So the rest of this month and August will be dedicated to building my mileage so that I have the endurance for this. Also trying to think of good ways to fundraise...g'head, think of a way to embarrass me. I do things for donations.
If you want to donate--it's tax deductible!--just clicky [HERE].
Posted by Thumper at 7/08/2020 05:34:00 PM 1 comment: