Max does not yet need the steps, but I wanted to get a set and get him used to them before he does. Every now and then he looks at the sofa like, "Eh, maybe," but he always makes the jump...he's 16, there's going to be a day when he can't.

So I ordered one and the Spouse Thingy set it up tonight. 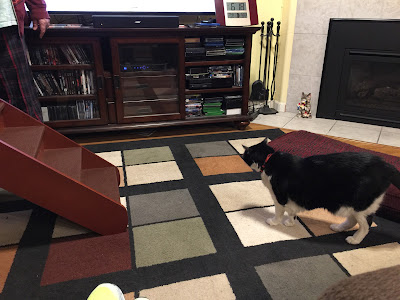 He wasn't too sure about them. But hey, we're smart people, we can convince him to give them a try. 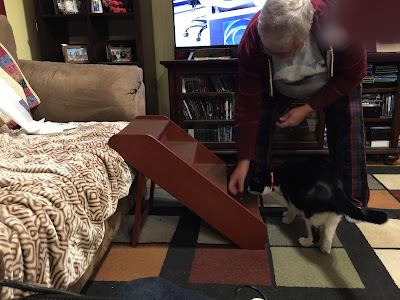 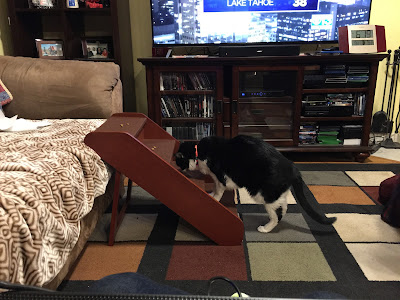 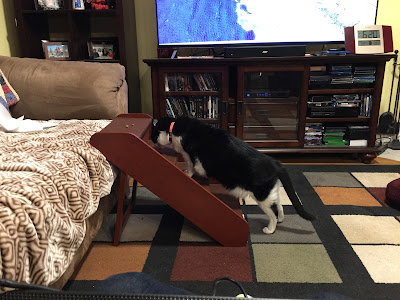 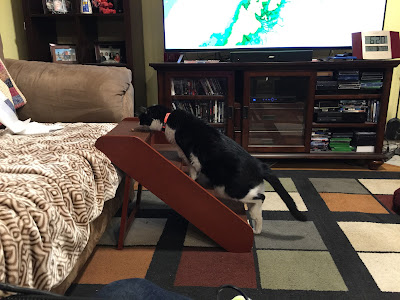 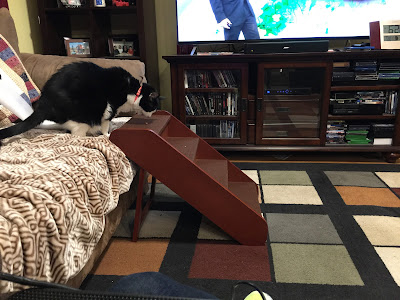 And then jump onto the sofa to get the last treat on the top step. 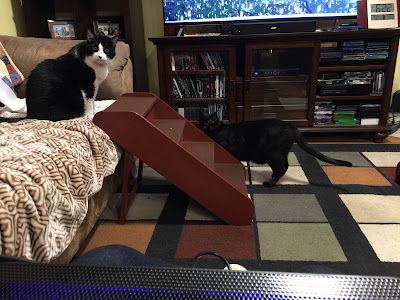 What...you didn't expect me to just walk up those steps, did you?

I swear, he did it on purpose, like he knew we wanted him to walk all the way up. He has cubes around the house to get onto things like the bed and my desk, so I know he's familiar with using other things to get where he wants to go and if he eventually needs this he'll use it.

Last week the Spouse Thingy and I went to Disneyland. It was intended to be a short trip, just a couple days, have a ton of fun and ride as many rides as we could. We flew down Tuesday afternoon, with the idea that I could take that evening to get over the whole OMG I FLEW thing, and we'd go into the park for dinner at most.

And we did that; we wandered in for just a bit, but it was crowded and neither of us like crowds, and I wasn't as over the traveling bit as I should have been, so we left and went for food in Downtown Disney.

I was being intentionally classy, but if you look close...yeah, I'd had enough of the day already.

Wednesday held promise; we got up early and were at CA Adventure for the extra magic hour, during which we hit a couple of rides, the only two on that side I bother with and one he likes (but I did not ride, Guardians of the Galaxy, because of my back) and then we headed for Disneyland.

Let me tell you, the whole Max Pass thing is awesome. It was worth the $10 each and saved us a lot of time, making it possible to get on more rides that we otherwise would have. Normally, we'd brush off a long line with, "Eh, we'll get to it tomorrow," but we had the chance to get on all the ones we wanted, and some more than once.

The plan was to get up early again on Thursday and get to Disneyland for the early magic hour again. 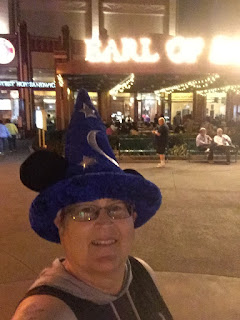 Now, here's the thing. If I'd have paid attention, I might have seen what was happening before it happened. From 7 in the morning until 8 at night, I barely peed. I was drinking, but not enough.

If I'd looked at this picture, taken just before dinner Wednesday, I might have noticed that my face was even bigger than it usually is. And if I'd noticed that, I might have taken a look at my legs, which were probably an inch thicker than typical.

The notion that I'd been drinking but not thirsty I might have blown off to my meds working really well. And the creeping fatigue? Well, I hadn't slept much the night before, and we were pretty busy all day, so of course I was tired.

My back hurt. A lot. But I'd been walking all day, so sure it did. I'd been taking Norco to stay on top of it, but there was still that grinding pain that I hoped would eas up after a good night's sleep.

I got up Thursday and we still planned on getting to the park early, but I was six kinds of tired and just felt like crap. I needed more sleep, so the Spouse Thingy went down to the lobby to read while I tried to sleep more...which isn't easy when housekeeping is in the hall right outside the door, and every room around you is being vacuumed.

I gave up, texted him to come back, and we headed out.

I got as far as the security gate...I couldn't do it. The crash had occurred. Lest it be spectacular, I needed to crawl back in bed.

Two hours later, and some snoozing though not really sleep, we tried again. I made it into the park, where I ate half of a really horrible hot dog, when it was pretty clear: I was done. Done enough that staying another night was not a great idea for me. My back was completely jacked, and my electrolytes were probably skewed as hell--hence the basketball face and general bloating and creeping nausea--so we went back to the hotel and changed our flight from Friday afternoon to Thursday evening.

We got one good day, though. Because of Max Pass, we did everything we really wanted to do. We just didn't do as much of it as we'd have liked. Wednesday was a blast, which made the trip worth it.

But still...this is why I don't like making plans. It's bad enough that I screwed up the Spouse Thingy's vacation, but at least he knows to expect it and understands it. Other people? Not so much, even when they say they will. "But you did X, you should be able to do Y."

Yes, I did most of the 3 Day. I also did it on Norco and alcohol, something I don't recommend and won't do again. And if I'd crashed like this then, I would have stopped. We had a hotel room room and not a tent in camp for a reason. 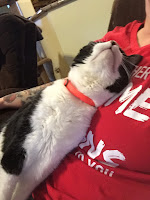 It took until today for me to feel reasonably normal. I'm still tired as hell, but that might be because some furry thing decided he loved me at 1 am, and then at 6:30 it was time to start reminding me that breakfast was in half an hour.

In any case, the cats were happy we came home early (after an appropriate amount of shunning, which ended at 4 am Friday.)

The Spouse Thingy still has a couple of days off, so we might go do something, depending on the weather. We keep talking about a long bike ride, so of course it's been raining. I'd like to go wander around San Francisco, which means it'll be cold and windy. But we need to do something, just so I don't feel like I wasted his time off.

Next time...fly down early in the morning, do only one day, fly home that night, and crash in my own bed.