Tomorrow will be a rest day, mostly because by mile 17 of today's 20 my knee was letting me know enough is enough. I was feeling my quads this morning before I even got on the bike, like I'd done a 300 pound leg press more than once.

Worst part...over 300 miles, and keeping my calories close to 1200 a day, I've lost a grand total on half a freaking pound this month.

I better be getting some shredded legs out of this and am gaining muscle, but I had a few things off the Bad Word List tumble from my mouth this morning.

OTOH, Max reaped praise when he got on the scale, because he's holding onto 12.5 pounds. Also because he sits there until I say he can get up, which makes him a good boy, but I know better than to say those words. Instead he gets "Good job!" even though deep down I'm thinking, "Good boy, big guy."

The first charity event I'm committed to this year is rapidly approaching and I haven't even started fundraising yet. It might be the only one this year--we registered for the 3 Day but I doubt we'll do it, because it's a spendy kind of thing and we have some home improvements to tackle--and the one for sure is the one I'll do this year and two more, maybe three. Stop when I'm 60.

The for sure is the St. Baldrick's head shaving event in March. This is the only one I'll probably beg for donations, starting...now.

You donate, I get my head shaved and suffer the uncomfortableness of it for about 6 weeks, until it grows out enough to not look six kinds of weird.

It's for kid's cancer research, so please donate what you can. I will look like a goofball for something that does a hell of a lot of good for kids who are going through this. I set a goal of $1500 for this year, and I'd at least like to break last year's $1205.

For about a mile and a half on my ride today, I was about 3 kinds of freaked out. I noted in my rear view mirror a car following; I expected it would speed up and pass me, but it stayed back there, creeping along at the same 14 mph I was going. When it didn't pass me, I made a hard fast turn onto another street, because of course I was imagining things, and it would keep going straight.

The driver turned onto the same street, and kept the same distance behind me. 14-15 mph on a 25 mpg street.

So I pedaled faster, looking for people. When I got to the end of the street I turned right, knowing my dentist's office was one more turn away, and if that SOB was still on my six, I intended on barreling in there.

I turned left to the street where the dentist is, he turned...and when he spotted the cop coming my way, he did a U-turn and went elsewhere. I was =this= close to waving the cop down, and in hindsight I should have. But riding in town just got a bit creepy.

On the bright side, the manager of the pizza place where the Spouse Thingy and I often meet near the end of our rides asked the building owner about putting in a bike rack, and today he told us work will start in February. They're putting one in near the pizza place, and another at the end of the strip near the bakery.

It stemmed from a Facebook post not too long ago. The manager was online getting feedback, and I posted--not thinking anything would come of it--that a rack to lock up to would be nice, so I could destroy all the calories I'd just burned on a ride. He replied he'd make it happen. And damned, it's gonna happen.

Today is the Spouse Thingy's last day off. Sucks that we didn't get to go to Disneyland, but we actually had a decent time at home. It rained a lot but we still managed to get several rides in--I think I'm at around 140 miles for the last 2 weeks--and we saw a couple of movies, purged a bunch of stuff from the house, and slept in a lot. Not too shabby.

Because of the opening of Star Wars Land in Disney this year, it's probably going to be wicked crowded for the next 2-3 years, so I doubt we'll even try to go. I may be wrong, who knows. But I think we'll shoot for something different this spring, maybe Monterrey. Or Vegas. Or both.

Also, I'm still contemplating Patreon. I kinda want to, kinda leery of it, mostly because of some horror stories I'm reading online. I'd just like a platform where I can share stuff I'm working on before it goes to print, an all-you-can-eat kinda thing for a freaking low monthly cost. 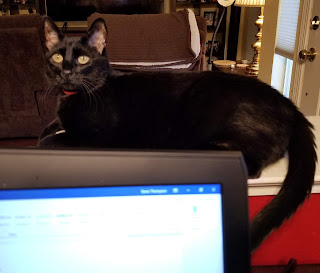 And this guy has been helping lately. I think I'm glad I don't understand him, because his tone is pretty freaking critical and he doesn't seem to approve of the work Max and I are doing.

Okay, one more week left in the month and I'm totally on track to hit 2000 miles for the year. Presuming I can keep this pace, especially once summer hits and it's hot and all I want to do is sit inside and read.

But, so far so good.

Most of the miles have been done on my spiffy pink bike, just riding around town. I still get asked a lot of questions about it, usually just people who are curious about where one gets a bike pink enough to blind the masses, but once in a while I'll talk to someone who wants to know if I get any kind of real workout on it.

This is today's ride. It was 45 minutes, a smidge over 10 miles. My heart rate was about as high as someone my age should get, and I sustained it the whole ride.

I'm not fast, not even close. I top out at about 14.5 mph using level two of the pedal assist. I could go faster by going up to 3, 4, or 5 but this is the sweet spot for me, just enough to take the strain off my knees but not enough to turn it into a super lightweight motorcycle. I pedal, I get my HR up, and I sweat.

I get passed by a lot of the same riders, guys on road bikes who blast past me at 22-25mph. One part of my brain says I'll get there someday, another part doesn't care because I'm already having fun.

I also cross paths with this old guy most days; he's in his 70s and rides slowly, on the sidewalk, on a fairly nice hybrid. We see each other enough that when we pass we say Hi and smile.

I nearly always ride by a drug deal going down on one of the bike paths...by now I think the guy realizes I'm no threat, and he nods when I pedal by. I just tell myself he's selling weed and it's legal here, so no skin off my nose.

I just zoom around and enjoy it. Granted, I wish we had bike paths like the ones in nearby Davis, and that there were safe roads to get to places like Davis and Vacaville on a bike...it would be a hell of a lot more fun to get out of town without needing to throw the bike on the back of the car.

If I ever win the lottery, we're totally moving to someplace that has great riding paths (and ebikes are allowed) and the temperature is nice and even and water magically appears without rain.

Hey, if I can win the lottery, I can find that place.

I fell way short of my 2018 goal of racking up 2,000 biking and walking miles. Still, I set the same goal for 2019, because it's totally doable if I pay attention to the numbers every week.

I can easily do that. We're 14 days into 2019 and I'm sitting at 122 miles so far. Even with the Spouse Thingy being off this week and the rain that will surely impede my riding time, I can hit 167 miles by the end of the month, even with this week being a rainy shitshow.

I might have to ride indoors.
Where I have a honking big 4K TV to watch.
Life is so hard.

Peleton and NordicTrack are battling for my money on Facebook, ad after ad after ad, which would give me a better alternative to indoor riding than my current indoor ride, but cripes...$2000 for the bike plus like $40 a month to access the online classes. That's an extra forty to have someone yell at me from teh discomfort of my own home while I lag woefully behind everyone else in the class.

And I'm pretty sure those bikes have little cameras for the instructors to peek at you, which means the rivers of pink sweat running down my face would be seriously noticeable.

Oh, yeah...I sweat pink. I know this because a little girl in Starbucks a couple days ago felt pressed to tell me I had pink sweat on my forehead.

Not seeing what you expected?
Yeah, I deleted it.
Why?
Because it was a lot of repetitive whining.

The TL;DR: we had vacation plans. We canceled them. We're going to have fun at home instead. We're going to get stuff done around the house instead. Maybe some shopping, because I want a love seat and to get an idea what blinds for the front room might cost.

I basically ended last year and started this year the same way: 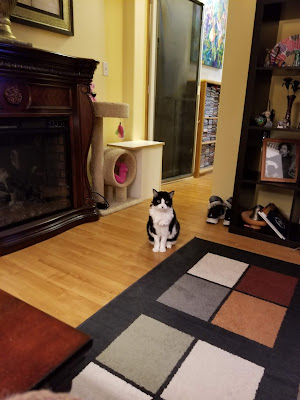 With him staring at me.