Drive-by DMs (paraphrased) that drove me a bit batcrap crazy, mostly because they were send-and-never-respond kind of things.
1. "Stop with the fucking bike posts. No one cares."
2. "Stop with the libtard black/trans/queer lives matter bullshit. If your kid came home with a black girl, you'd shit yourself."
3. "Stop with the I-support-gay/trans/nonbinary crap. You're just proving that you're NOT Christian. It's right there in the Bible: man should not lay with another man as with a woman. So go fuck yourself."
4. "Stop with the trans crap. If your husband announced he thought he was really a woman, you'd run screaming."
♦♦♦♦♦♦♦♦♦♦♦♦♦♦♦♦♦♦♦♦
1. No. My riding brings me joy. You're also probably one of the so-called Max fans who FB-Messenger-whine when he posts about Wick. Just guessing. We blog/write/FB-post about the things that matter to us, and those things matter. If it bothers you so much, why are you still reading? I enjoy cycling. Max's career is crafted firmly in the Wickiverse. Why does that annoy you so much?
I honestly do not get that. If a blog has multiple posts about a topic you have zero interest in, why would you keep going back? Same with FB or any other venue. If you don't like what's being written about, move on. Whining about it is kinda like bitching to a horror writer that they don't write chick lit. You don't like horror; you like chick lit; find someone who writes that instead.
♦♦♦♦♦♦♦♦♦♦♦♦♦♦♦♦♦♦♦♦
2. I think my son's wife would have a bigger problem if he brought some girl home, regardless.
But let's play the game. Let's assume that he's single and dating, and he brings home The Girl. They walk into the house, all happy, and hey, she's black.
I don't care.
I never cared.
Well, I would care about the way the world treated them, together and separately, but no, I would not and never have cared whether he was in a relationship with someone not white. Why would I?
For that matter, I wouldn't have cared if he'd been gay and the person he brought home was male.
What would I care about instead? That he was happy, loved, safe, and content. That he was treated well and offered that in kind.
And I'm super curious how one equates the BLM movement to "yeah but you wouldn't want him to bring one home" school of thought. How entrenched in to 50s are you?
♦♦♦♦♦♦♦♦♦♦♦♦♦♦♦♦♦♦♦♦
3. I dunno, man, maybe it's time you brushed up on biblical translation history. Literally, the translation with which most people are familiar didn't appear until 1946. There are questions about it, sure, but until a translation from Greek to German to English, it was more like "Man shall not lie with young boys." Kinda makes it an edict against pedophilia, not homosexuality.
It hinges on the word arsenokoitai,which somehow morphed from "young boys" to "homosexual" during a translation from Greek to German. It became a rolling stone, and the moss gathered upon it has been flicked at gays ever since.
And ya know, Jesus never once mentioned homosexuality.
I prefer to land on the side of kindness. I don't, not for one minute, believe Jesus would have turned his back on someone for being gay; I don't believe God would reject one of his children for being gay. Nor would He reject them for being trans/queer/fluid/nonbinary. We're all designed differently, and different is not a sin.
Also... you don't get to define my Christianity for me. It's that simple.
And if you have to know...my Christianity revolves around equity, parity, fairness, and most of all, kindness. Not exclusion and condemnation. Neither of those strikes me as being particularly Christ-like.
♦♦♦♦♦♦♦♦♦♦♦♦♦♦♦♦♦♦♦♦
4. Surprise, mofo, no I would not run. It would be a shock, but other than that, eh. One of us should be the girl in this relationship.*
Do I understand when one partner opts out of the relationship under those circumstances? Of course I do. Ending the relationship is not the same thing as not supporting someone in their transition. But I would not opt out; I love the person, not the meaty outer shell.
AHA SO YER GAY!
No, that's not what it means at all. And it's sad that you can't wrap your head around it.
Would it be different if we hadn't spent the last 40 years together? Maybe. But I doubt it.
♦♦♦♦♦♦♦♦♦♦♦♦♦♦♦♦♦♦♦♦
And since you love my bike posts so much, here's the next one I'm going to get. Just because. 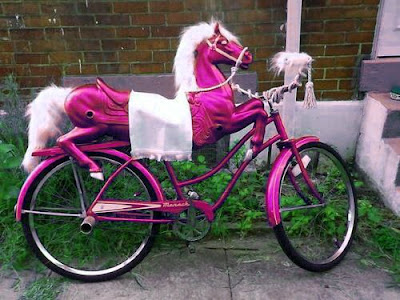 So...Pledge the Pink has officially been canceled so me deciding to not go was just getting a step ahead of things. They're turning it into a virtual event (kind of a steep entry fee for a virtual, but, ok it's a charity and I'll count it as a donation.) We could get a deferral to next year, and we'd like to say sure, we'll go...but realistically, who knows? My gut says I'm done with multiple-day events because they're just too hard on my body.
I can do a virtual, no problem. Close to home, I can stop when I want, give up if I want, no one else is inconvenienced by it (unless I do it with DKM and she's used to my chit.) No travel is a bonus. But we'll see.
Next year, though, even if my doc is okay with it? It's a milestone kind of year for us. We both turn 60. We'll celebrate our 40th anniversary. We might only be able to do one big thing and I'm not sure a charity walk is it. Ideally I'd like to do something with the kids, but, again, we'll see. I'm honestly not counting on there being full normalcy next year.
What I am doing right now...a virtual 475 mile bike ride that's raising money for food insecurity in North Carolina. Yes, I know, I live in CA, but I don't know of anything similar for here and I only know about this one because of friends who live out that way. They started a team and began riding, and I hopped on because why not? It's a great cause, and I have people to prod me onto my bike every (almost) day.
I am behind them, because of course I am, but that's all right. I'm just waiting for the right time to jab a virtual stick in Jeni's virtual wheel and sideline her long enough to pull way ahead. Because I MUST WIN.*
Because it's freaking summer and I am a weenie, most of my riding is done inside, but I've got a great setup now, so it's actually kind of fun. I put the road bike up on the trainer, have a Wahoo stand in front of it and a 24" TV on it, so I can watch whatever I want, including streaming, and set up a Vortex fan near the front wheel so I don't get hot. And if I have to stop to pee, I don't have to search for the nearest restroom.
Given how many places have been closed lately, and still don't have everything open, that last thing is major.
I kinda don't like how my office looks with this setup in it, but, eh, it's not like anyone else is coming into the house right now. And I use it a lot. It would be nice if Buddah would stop horking on the bike mat, but it seems to be THE place to barf these days. And that chit does not clean up well, not on this mat.
*I really don't care but...hey, whatever makes me ride...
Posted by Thumper at 6/25/2020 05:47:00 PM No comments:

Normally around this time of year, I'd be well into training for a long walk and just ramping up fundraising. I registered for two events this year, Pledge the Pink and the Komen 3 Day (well, Komen moved my registration from last year to this.) PtP involved going all the way across the country--but the Spouse Thingy was going, too, which made it less dicey--and there were no hard minimums to raise, which made it attractive. Plus, my friends would be there.
Komen cancelled all 3 Day events this year, which I get and agree with. There were only 4 walks slated this year, but some of them would have been in the thick of COVID, and by the time the last rolled around another surge is highly possible.
PtP hasn't cancelled anything. Yet.
But.
I went to my annual appointment with my endocrinologist, who pointed out the veritable viral soup of that many people walking together in one location, the predicted second wave of COVID, and my kidneys.
It's wreaking havoc on internal organs, kidneys especially, and I have stage 3 kidney disease. She made the point that I also have a reactive airway and if I get sick...the potential to be really bad is significant. Added onto that...long distance walking requires downing high amounts of sodium, and while I'm not on a sodium restricted diet yet, it's just not a good idea if I want to keep my kidneys.
I've had issues the last couple of several times I've walked.
So.
Yeah, not going this year. And unless my numbers improve, not going next year, either. Komen switched everyone's registrations from this year to next, but the odds aren't terribly high that I'll go to that one, either, unless it's to cheer walkers on (which would be tons of fun and I just might do that.)
Like it or not, I may be done walking for charity unless it's a single-day event.
No lie, when she said that I kinda wanted to panic, because...cycling. I sweat, I replace lost electrolytes. I worried that she was about to take that away from me, too.
But, no. Cycling doesn't require traveling, the training doesn't have me doing absurd numbers of miles back to back, isn't one day piled on top of another, and I don't need to choke down salty drinks and food as often. Given the number of miles I ride at a time, and the most I would typically be on the bike is two hours, she didn't see any reason to worry about it and actively encourages me to keep at it.
(This was when I whined about my weight. All the miles ridden, the diet pretty well nailed down and at 1200-1400 calories a day, and I'm right where I was last year. She was quite kind in not rolling her eyes at me, but pointed out that my labs were all spot-on, my BP is ideal, HR pretty good, and everything looks better than it did last year. And apparently I wear the same track pants every year [I do, intentionally, because they're lightweight and the first thing they do to me is force me into a scale] and they've gone from skin tight to loose. So. "Keep doing what you're doing and stop worrying." I'm not worrying, I'm WHINING. I have a spiffy cycling jersey to wear but LYCRA IS NOT FORGIVING and I have a spare tire around my waist.)
Anyway.
I digress.
The walks are out for this year, possibly next, maybe even beyond that. So I need to find other charitable endeavors. I'll keep doing St. Baldrick's until I hit my 10 year mark, but I need to figure out something else, even if it's a virtual event that I can do on the bike.
Posted by Thumper at 6/12/2020 12:49:00 PM 2 comments: