Fifteen years ago, at WTF o’clock, the Spouse Thingy woke me up and herded me into the truck; I took my pillow so that I could doze during the drive, but truthfully it was more to bury my face into, because I wanted to pretend that this wasn’t happening. On a good day, morning burns; on this day, it was terrifying, because I was headed into the Realm of Really Scary Shit, wherein a geeky neurosurgeon with confidence as big as his pants were too short was about to go fishing in my brain for the tumor that was clinging to my pituitary and causing me all kinds of problems.


I have spotty memories from that day: after checking in and changing into the spiffy super thin gown, I realized I couldn’t run because they now had my clothes; asking the surgeon to not sneeze while his fingers were in brain; the sliding away from full awareness to the lull of the drugs, and being wheeled on an uncomfortable gurney, wishing I still had my glasses on because rolling down a hospital hallway is even more terrifying when you can’t see.


I vaguely remember waking up and whining about how much my head hurt, and hearing someone near the bed tell the Spouse Thingy that I wasn’t breathing, and then being yelled at to take deep breaths. Crying later because I didn’t want more morphine, because it was going to stop me from breathing, and I didn’t want to die. The Spouse Thingy promising me I would still be able to breathe, so let them give me the drugs.


He stayed late into the night; one of the critical problems with my case was having diabetes insipidus, and without drinking enough my electrolytes would be shot all to hell, one of the things the surgeon was most concerned about during recovery. I was off my medication post-surgery, to see if removing the tumor would return pituitary function and if the missing hormone would kick back in. He stayed and kept my water pitcher full, and made sure that I kept drinking (I popped the catheter bag; I was drinking a lot); the missing hormone stayed missing and none of the things the tumor had knocked out returned, but damned if my electrolytes weren’t perfect.


The entire day was pain. I was in and out of it, but I remember waking up and seeing the Boy near the foot of the bed in a bright blue shirt. My in laws beside the bed, making sure I was all right. Pudding, the only thing I wanted to eat. Grape juice, the only thing I wanted to drink—so the Spouse Thingy went in search of it for me. I avoided the ICU, which was something I’d been warned about before the surgery: this is major shit, sometimes people wind up there. My major shit only landed me on the neuro floor, and I stayed there.


Clearly, I survived. The first couple of days are mostly lost to the pain (and I learned: morphine suppresses your breathing rate but I didn’t actually STOP breathing, even though I was 100% sure that’s what the recovery room nurse said), but on the 4th day, I was sent home. I felt great, the pain was a dull roar, and I was out of bed and walking. I had visions of sitting in the living room, watching TV, lounging in bed and reading. I had no expectation that just the drive home would wipe me out, nor that I would stay that wiped out for a few more days.


Also…I did not expect to look like a Teletubby that had the crap punched out of it by Mike Tyson. But I did.


It became a waiting game: what the hell was growing inside Thumper’s head? It had been pretty freaking huge, creeping up the pituitary stalk toward the hypothalamus, which necessitated a pituitary specialist, but none of the images taken gave any of the docs I saw a clear idea what it was.


Now, the thing I WISH they had told me: it’s never cancer. Pituitary cancer is so freaking rare that since they began compiling stats on it 100 years or so ago, there have only been around 100 cases. I might not have worried so much if I had known. I was given a range of possibilities: prolactoma, adenoma, craniopharyngioma. The surgeon was leaning toward that last one based on what the tumor looked like when he removed it, and if that was the case I was looking at a few rounds of radiation to make sure it was gone.


When the results came in, he called my himself. He wanted me to hear it from him.


Lymphocyctic hypophysitis. It’s extremely rare, something usually only seen in women who have just had their first baby. I was 40 and my baby was a teenager. But the major thing…it was benign. It was also basically a giant zit, a mass of infection clustered on the pituitary. Not likely to ever come back.


It left its mark, to be sure. I was left with diabetes insipidus (“water” diabetes, not to be confused with diabetes mellitus, or “sugar” diabetes, the one you think of when you hear the word…I am always thirsty, and if my meds wear off I will drink like a fiend and pee like a maniac) and hypothyroidism. My hormones were out of whack for years. My brain makes zero growth hormone, which means muscle repair is a long process and weight training pretty much useless. It also means extra body fat, which sucks big fat hairy donkey balls.


Whether related or not, but occurring right along with it, I have difficulties with heat; if the temp is over 72 or so, I’m miserable. If I’m trying to exercise in it, there’s a good chance I’ll get overheated. That lesson was brought home hard a few years ago when I took a bike ride at 75 degrees. Forty-five minutes of slow pedaling, I was dizzy and nauseated, and barely made it through the door before I passed out. I don’t wear a bike helmet because of it—ten minutes and I’ll hit that point—and it makes walk training all kinds of fun.


It makes the idea of warm temps on the 3 Day a little worrisome. But since I don’t walk alone, I don’t worry as much. No one’s going to let me die there.


It’s part of why flying is iffy. Normal people who are nervous flyers get a surge of blood sugar when their cortisol goes up—fuel for the “flight or fight” response—but mine drives down dangerously, and I don’t recognize that it’s happening.


It’s why, when we go places like Disneyland or Vegas, we don’t tend to invite people along, even when we’d like to. I never know when I’m going to crash and burn; I may be fine, I may need to stop what I’m doing and go back to the hotel room. I never know. I may be fine all of one day, and barely able to think the next. It’s not a sociable way to vacation, for sure.


The main thing is…it didn’t kill me. I can live like this just fine.


But 15 years ago at WTF o’clock, I was in the passenger seat of a Chevy S-10, trying to not freak the fark out. Probably a good thing I didn’t, because at 70 mph, if I had startled the Spouse Thingy, we both might not be here.

Okay, so…a month. I did not realize I had not posted here in a month. I’m not even sure how many people still read the blog, but my ego likes having one, so I’m not killing it. A lot of my favorite bloggers are far less frequent than they used to be…I think because Facebook is a thing and we talk to each other there.

* * * * *
I do enjoy Facebook; I miss the 200 blogs I used to read 3-4 times a week, but FB is the one place I feel like I really connect with other people, and where else am I going to see pictures of what my friends are having for lunch? And that’s not a slam…I am one of those people who likes the food pictures. I also like all the selfies and weird memes and stupid funny video clips. FB was made for someone like me.

* * * * *
I have had the same song stuck in my head for over two days now, and it’s giving me a headache. Cake By The Ocean. Aside from the repetitive refrain pounding inside me skull, I keep thinking that metaphor or not, eating cake by the ocean is a bad idea. Sand gets where sand doesn’t belong, it starts to chafe, and then no one has a good time.

The question: Which would you prefer for the start of the Wick After Dark series—one long novel, or three shorter novellas? Max’s poll leans heavily to one long novel. Writery people want three novellas. I think (guessing) readers just want to buy one thing, thinking it will be cheaper overall. Can’t blame them. Writers see the benefit of releasing novellas; indie writers especially look at the production costs versus the increased sales numbers.

I don’t care either way, to be honest. But it unless a bunch of stuff is edited out, it’s going to be a very long book, one of the longest I’ve written. It’s pretty much three separate stories, tied together, and will work either way. The final decision will be the editor’s, but unless it balloons to Stupid Long, I don’t see why she’d advise against doing what readers want.

In any case, he’s officially older than any other cat I’ve had. More spoiled, too.

* * * * *
Yes, yes we did grill steaks to cut up as cat treats while we had Hamburger Helper for dinner. And again when we had hot dogs. And when the Spouse Thingy had cereal. Granted, we buy the cheap little chuck steaks, three or four for about $5, but it’s still steak and damned if Max doesn’t go nuts for it. 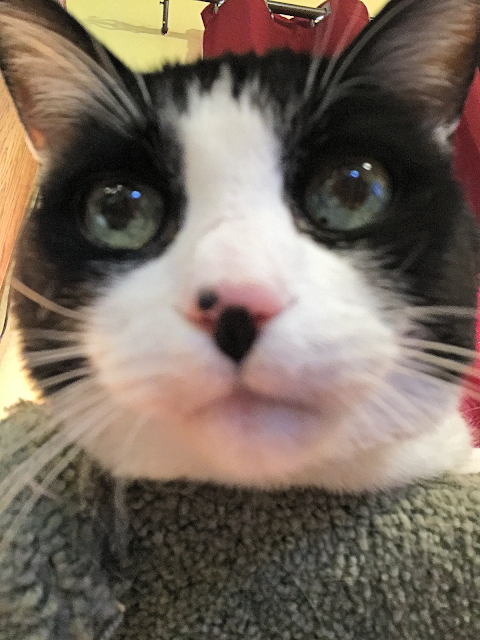