This morning I realized I was 20 short to hit the halfway mark by June 1. I'd have probably been there a couple weeks ago if I hadn't thrown my back out, but it is what it is, and I was *just* shy of being on track.

So I got off my asterisk, put some shorts on, grabbed a drink, and headed out. I was only counting on 10 or so, thinking I could make up the difference over the next week by adding a mile or two here and there.

But I got going, and it was so nice out, not at all hot yet, and I was having fun, so I didn't even head toward my break point at Starbucks until I was 12 miles in. I hit 15 just before I stopped for a drink and to take a few minutes to let my poor, aching asterisk off the seat for a bit.

I have options for the ride home. There's a 1.6 mile route, a 4 mile route, and a 5 miles route...and probably a bunch of others in between, but those are the ones I've ridden and know the distances. What I choose usually depends on the time of day and the traffic, but it was a no-brainer today. I wanted to hit 20 by then, and traffic was light, so off I went.

I hit the driveway with a few wheel rotations past 20 miles, and with some added walking...1003 miles.

As long as nothing else happens--no more back injuries, no getting sick--I think I'll be just fine for making my goal. 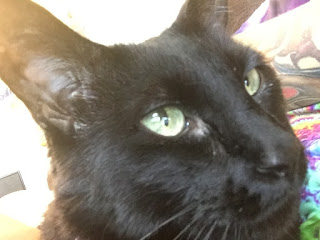 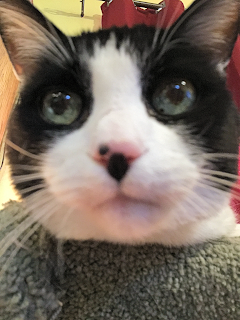 I was awake until 3 this morning, my own doing because I had caffeine after 2pm yesterday. But no big deal, because the Spouse Thingy worked last night and would be home in time for The Feeding of the Beasts.

I heard Max meow outside my door at 7:30 and rolled over, because if the Spouse Thingy wasn't home yet, he would be soon.

At 8:30, Max was howling outside the bedroom, which propelled me out of bed, because that was over an hour after Food O'clock, and surely something--hopefully just holiday traffic--was delaying the opener of the can.

I opened the door; Max led me into the bathroom and then down the hall to the living room. He had clearly been fed, and the Spouse Thingy was asleep in the other room.

Max made sure I got myself a drink, that I sat down...and then he raced to the bedroom, where he curled up on the bed.

On the spot I had just vacated.

That little monster just played me.

I am still sleepy, I needed another hour at least, and I really want to go back to bed. But...

I've spent the last 5 days doing as little as possible, because moving is 120 kinds of suck and I am a delicate snowflake unwilling to suck up the suck. I've plastered myself into my recliner with the TV playing stuff I'm not really watching, my computer in my lap, and have spent more hours than is healthy scrolling through Reddit. And it's all because one afternoon last week I bent over to scrape the food on Max's plate into a little pile. He has issues getting all the food into his mouth now, and it helps if we pile it back up 2-3 times while he eats. 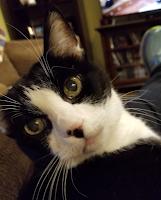 He's gotten so used to it that when it spreads thin, he sits down and waits.

But, still...as I bent over to scrape, pain exploded in my lower back. It settled in one spot, an angry knot of ouch that is only feeling a little better today. Because of the pain, I haven't gotten more than 4 hours a sleep a night, so my brain has not been fully engaged.

Thus, I sit and scroll, reading but not reading, and getting absolutely nothing productive done. The house is a disaster (really, don't come over, I won't open the door it's so bad) and it's going to stay that way for a few more days...even if I miraculously heal overnight, I'm not risking moving the wrong way and starting this shit show all over.

So today I'll probably sit here and scroll, maybe write a bit. Then scroll some more.

This morning I surfed through Facebook and Reddit, reading posts about Mother's Day and the things people did. Most were cute, most were fun and funny, but a few...eh. They made me feel twitchy, and not because these were from people hurting because their mother's are gone and it's a hard day for them.

I understand the frustration of trying to lose weight and get healthier. Hell, I've been watching what I eat, counting calories, tracking exercise, and I hit a plateau a couple months ago and haven't lost a damned thing. I'm 8-10 pounds behind on my goal. It sucks, but it is what it is. I wanted to go to my next endocrinologist appointment at least 10 pounds lighter than I currently am, but with two weeks to go, that's not happening.

I'm pretty tight with the calories. But when the Spouse Thingy was off a few weeks ago, we went out to eat a couple times, and at no point did I feel like I was being "bad." Food should not, not ever, make you feel like you're engaging in negative behavior. It's just food; you have to eat. And there's nothing wrong with the occasional indulgence.

I get it if you make the salad choice because pizza might be a trigger. I understand if the calories in that donut or chocolate just aren't worth it. But denying yourself isn't "being good." The flipside is that if you made a different choice, you'd "be bad," and peoples...eating is not bad behavior.

Your kids are listening. They're watching. Letting them see you make good choice is admirable; hearing you label your choice as being good sets them up for issues later. Change the narrative; it's not being good, it's appreciating that the foods you're choosing make you feel better and healthier. Let them hear that you enjoy that salad. Let them understand that once in a while a donut is a fine choice, but right now it's not something you want to eat.

And if you really do want it, eat it. Account for the calories and move on.

Have the donut, and if it looks like it will make you go over your total for the day, take a walk or bike ride and burn it off.

Enjoy your food, because you're not getting through life without it, and a life of deprivation is only going to make you miserable while setting you up for a spectacular binge.

I had plans for today. Get on the bike, ride 5-7 miles, stop at Starbucks for a bit, then ride another 5 or so, depending on how sore my backside was. Come home, have lunch, clean the kitchen, throw a load of laundry in, then sit down and get some work done.

But...I didn't get to sleep until after 2 this morning, and then Buddah was a total shit and attacked Max at 7:20, which functioned as a loud, piercing, unwanted alarm. Max screamed, I shot out of bed, and threw the door open in time to see Max running down the hall, Buddah on his tail, and the Spouse Thingy chasing Buddah.

The Feliway diffusers were dry. Those suckers might not be perfect, but the do work well enough that we notice when they've run out.

There was no going back to sleep. I've been trying to wake up enough to be at least moderately productive today, but it's nearly noon and the only things I've managed to do are feed the cats at snack time, find a potential handlebar for my bike thanks to a post on Reddit, and blink. And yawn. I've yawned a lot.