Which is probably why the air condition picked now to croak, just before leaving for the SGK walk.

The Spouse Thingy will come back and deal with it, but dang.

I am going to hear dollar signs with every step I take this weekend I think. Sixty miles of ca-ching.

Ah, well. We knew when we bought a slightly older house that we'd have to replace the unit sooner rather than later, but it would have been nice if this had happened like two weeks ago, or waited a week.

It's hot out, I was walking around the Factory Outlet stores, and I needed something to drink. A whole lot of something; I wasn't sure if my thirst was gripping because of the heat, because my DDAVP was wearing off early, or a combination, but it was fairly significant. So I wandered into the kinda-sorta food court, got a large soft drink (McD's is spoiling me with their $1 large...I was annoyed at having to pop for $2...) and found a table to sit at.

I could have kept wandering around, but not knowing if I'd need a refill or five, I stayed put. And I slammed that sucker back, draining it in less than two minutes, and was refilling it before most people would have taken their third sip.

You know what happens when you slam back a soft drink? And then another?

Things happen that most teenage boys would be proud of. I felt the offending bubbles pushing against my stomach, and knew there was no holding this back. If I let it loose, it would reverberate off the walls. But I have a modicum of control and managed to squelch it somewhat, but there was no mistaking that growling kind of sound coming from me was a healthy burp.

Just as I was congratulating myself for not letting it rip as loud as I could have, at the tail end of what seemed like the endless stream of belch, a woman at a nearby table yelled; her voice was an unexpected thunderclap of, "Don't do that! My God, that's so rude!"

She was so sudden, abrupt, and loud that I acutally jumped in my seat, and as I turned to her I blurted out, "Jesus, I'm sorry! I couldn't help it!"

Dead silence around me.

And I realized then that she was looking at her little boy, a four year old with his finger wedged about as far up his nose as it could get.

I can still hear the snickering that followed me as I hurried out the door...

If you don't follow my other blog, A Wabbit Walking, you may not know that this coming Friday is the first day of the Susan G. Komen 3 Day Walk for the Cure in San Francisco. And you may not know about my spiffy Supergirl cape. It's pink, and I'm wearing it the first day, and on it will be the names of people who have had breast cancer--some we've lost, some who have survived, and some who are fighting.

If you have a someone, and you would like me to carry their name, I would be honored to do so. Just pop on over there and leave their name in the comments of this post.

One days 2 and 3, I have t-shirts that will bear the names of the people we love and care about. One way or the other, I will carry those names with me all 3 days.

I can't wait to meet all my teammates; fundraising isn't done, so if you're inclined and haven't had the chance, pop over to our team page; it doesn't matter to which one of us a donation goes. Though, I just might be behind everyone else. Just sayin' ;)
Posted by Thumper at 9/26/2010 01:20:00 PM 5 comments:

How I know I'm noticeable:

I walked the outlet stores in Vacaville today(and surrounding area) rather than suck up 18 miles in Dixon, and around mile 10, just as I was getting ready to stop for lunch, I passed a couple and overheard one of them, just as I passed, say, "holy $hit, just how phcking far does she walk?!"

File under I Want: 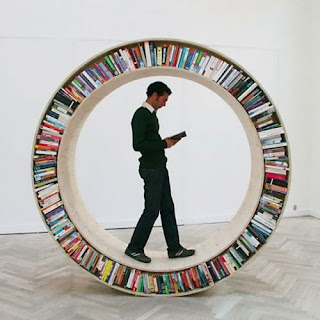 In the interest of giving me some additional time walking hills, the Spouse Thingy and I headed for San Francisco again. Bonus: the BART train didn't smell like pee today. Since it's a 45 minute ride from Concord to the place we get off of the train, that's a definite plus.

As soon as we got there we met up with Diva Kitty's Mom for lunch at Max's (who knew Max had a side endeavor? Not surprised it involves food, though...) ...hell, we've lived within 40 miles for years and just now got around to meeting. Stupidly, there are no pictures. We had a camera, didn't even think of taking pictures. 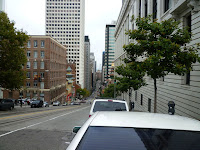 Afterward, Mike and I headed out to walk, and the first steep street we encountered was this one...from the bottom. And we walked up.

Holy carp...the picture doesn't do it justice. It felt a hell of a lot steeper than it seems looking at this.

My knee decided halfway up that it was stupid steep. 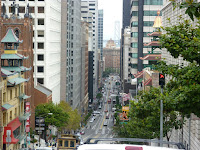 But...once at the top we were rewarded with this view (click the image to biggify)...peeking through the buildings, you can see the Bay Bridge. I would guess that on a clearer day, it would be even more noticeable.

We spent about 5 hours walking around, but probably only 90 minutes or so was hills.

Face it, after not too long, walking steep streets fades from a good workout into unbridled masochism. And that's not something in which one should engage publically.

So, we walked around China Town, went to the Cheesecake Factory, and then to Westlake mall for the hell of it.

There's still a couple of weeks left before the Walk...that's a couple more opportunities to go walk the inclines and see more of the city.

I stopped taking my growth hormone a couple of months ago. Between insurance headaches and my age--the older I get the closer I slide towards a cancerous family history--I decided to stop taking it, and just see what happens.

I worried about increased pain, but that hasn't happened.

I'm not gaining weight (not losing any, either) but I'm getting reallllly flabby.