Methinks it's time for the pink hair to go away. I bought a color removal kit yesterday...as soon as I can do anything without coughing my head off, the hair ir going back to brown.

Granted, I kinda like the pink, but I'm already tired of the looks I'm getting, and I haven't even been out that much. 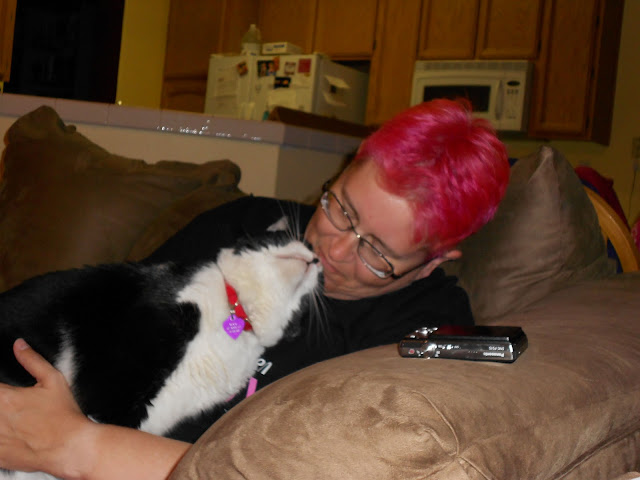 If you say to yourself "I'm going back to Great Clips because I've never gotten a bad haircut there," you have doomed yourself.

I look like I'm wearing a really bad toupee...

...with a really bad dye job at the moment.

I don't know what he's dreaming about, but he was whacking his tail against the sofa cushion hard and fast, and he just let out a little growl. 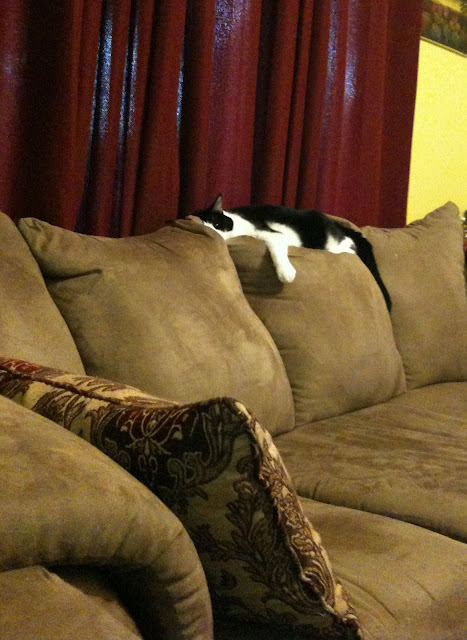 A few minutes after 4 this morning I woke up with a start, thinking we were having a royal earthquake. The bed was shaking so hard that I woke so fast and my brain fired up in nanoseconds, trying to determine how fast I could get into the bathroom (presumably the safest place) and if the cats would follow me in there.

I rolled over, pulling the blankets back, ready to swing my legs over the side of the bed, when I realized Max was right there.

Bathing at about a 6.8 on the Richter scale.

With an annoyed sigh, I slid back into bed and tried to go back to sleep. Max was happy to see me awake and crawled on top of me, tossing and turning until he'd created a nice little kitty hammock between my body and one of the body pillows I use to keep my back from twisting while I sleep. Once he was settled, he fell fast asleep.

I was wide awake.

I stayed there for over two hours, letting the little earthquake generator snooze on me, until mother nature decided I was getting up whether I wanted to or not.

Both cats happily followed me out into the living room, probably hoping for food. I turned the TV on to watch some news, poked around Facebook for a few minutes, and then decided that it was 1) too early to be sitting there drooling on myself, even if most normal people were already up and on their way to work, and 2) too cold to sit there in shorts and a t-shirt.

I went back to bed, curled up under the covers with my iPad...and the sleep bomb went off. I set the iPad aside and took my glasses off, happy to think I was finally going to get back to sleep.

And then the bed heaved with Max's weight as he jumped up and then stomped across the mattress. He plopped down by my head and took yet another damned bath, and 5 minutes later the bed heaved again with Buddah's weight as he stomped across the mattress. There was no bathing for Buddah; he just wanted to crush me into something he could comfortable sleep on.

By 7:45 I was drifting off again, one cat making disgusting licking noises by my head and the other doing his best to assure that breathing was a major effort for me.

Half an hour later, they heard the Spouse Thingy's key in the front door and both launched--Max's foot slapping against my face as he scrambled to be first out of the bedroom and all of Buddah's weight springing off me--because him coming home means crunchy treats, or if they're lucky, gooshy food.

Fine, so they woke me up again. I was tired enough going back to sleep wouldn't be an issue again.

Half an hour after that the bed heaved again and Max plopped down with his face a few millimeters from mine, his intent obviously to make sure that I could smell that he'd been given hid breakfast, so hey, I could stay in bed if I wanted!

So grateful for that.

I rolled over and he snuggled against my back...and then Buddah decided to join us again.

They got excited, thinking they might be able to score a second breakfast, and raced to the bathroom to make sure I did everything in the correct order, and then waited in the hall while I put some pants on...and while I arranged the covers on the bed so that they could go back later and snooze the way they like. Max likes the naked sheet just by the pillow, and Buddah likes to alternate between the fuzzy blanket and the comforter.

Dammit if I didn't make sure they would be able to nap in comfort.

I wandered into the bedroom to grab some socks a little while ago, and flipped the light on so I could see. Max opened one eye and sighed, and Buddah--annoyed because I interrupted his sleep to reach over him to get to the socks--took a swipe at my arm.

I'm thinking that in about half an hour, just enough time for them to get into those deep sleep places, that I'm going to rush into the room and jump on the bed, just so they can see how it feels.

You know I won't.

Why yes...yes I do always sit around in pink camos. Why do you ask? 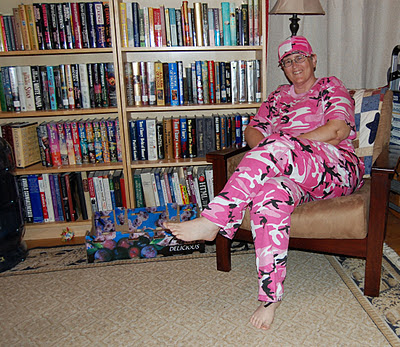 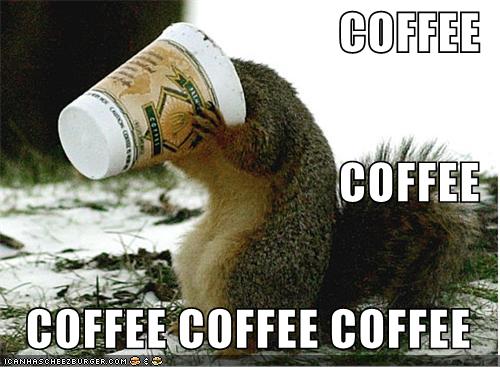