If you donated to my St. Baldrick's event...there's a 90% chance I am not shaving my head this year. Nothing came up, it's not that I don't want to--I do--but I had an offer I don't think I can refuse.

Basically, if after 4 pm on the 27th I can prove I still have my hair, one of my weird little friends says they will donate $3500 to St. Baldrick's.

The dilemma I am faced with is getting a donation bigger than what I can actually raise versus pissing off the people who donated thinking I would end up bald and living with it until my hair grows back.

The only thing I think I can fairly do is offer a refund to those who donated to see me shave. So if you donated and I can dig your info from the St. Baldrick's website, expect an email from me. You'll still get to keep the receipt for your tax deduction for donating to this charity, but will get your money back.

Ten more days to be the one to make me wind up like this post-shave: 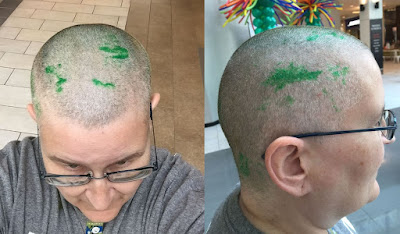 As it stands now, I'll be going au natural, but with the longest hair I've had in years. Granted, it's still short by most standards, but I haven't let it get this long in a good ten years. 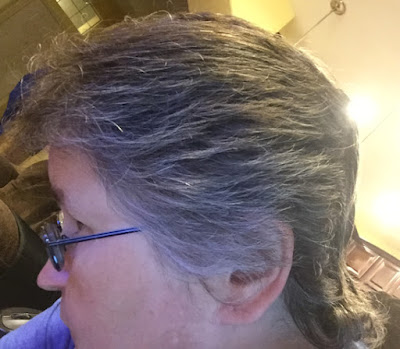 Look...I practically have a damned mullet. It's getting CURLY back there. If I let it grow, I could wind up looking like an actual adult female.

But...kids cancer. By shaving it all off, I can raise a few bucks that goes towards research and treatment of and for kids whose lives have hit the pause button because of cancer.

Last year, the first person to donate $150 got to pick green as the color I'd show up with. And I did it so close to the event that when the hair came off, I had a stained scalp. You know what doesn't just come off in the shower?

Because it was a layer of extra discomfort on top of how hard it actually is to wander around as a 54 year old bald woman, I'm upping that a bit this time. First person to go to $200 gets to choose whatever neon color makes their heart beat happy beats.

And if anyone goes to $1000 (other than the Murfs and they know why they're excluded)...I will not only show up with my hair dyed, I will show up wearing metallic pink mermaid tights. 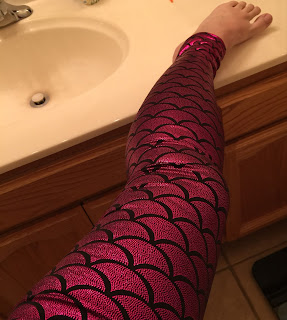 So here we go...me, asking for donations to one of the only 2 events I'll bug y'all about this year. Send me off in style, y'all!

I rarely eat out on the weekends; it was a bad habit a long time ago, when I would run errands and stop for whatever fast food struck me as being edible, just because I could and eating out alone doesn't bother me. Yet today I found myself at Wendy's, scarfing down a burger, and halfway through I wondered why.

Not like, why was I hungry and eating a burger instead of something better, but why was I having fast food on a weekend at all? For most of last year, I was doing pretty good at losing weight (slowly) until I hit a wall in September...but I've done really good at maintaining that loss. Part of the losing weight was not eating out on the weekends when I'm out running around by myself (the Spouse Thingy and I during the week? Uh, yeah, we eat out too often...I track the calories, but still...) and I have been super frustrated lately for having lost that traction I had.

Now, the burger was good, no denying that. I wasn't going to stop eating it and throw it out. For a fast food burger, it was freaking tasty.

But why now? Why break my own don't-eat-out-alone not-really-a-rule-but-a rule? I'd been at Starbucks, went to the grocery store to pick up something to make for dinner (because I do cook on weekends, even if I suck at it) and without really thinking about it...there I was at Wendy's.

Then I realized I was kind of ticked off. Not at myself, because burgers happen, but had that deep-down, simmering, bitch-I-will-cut-you anger going on.

Then I was annoyed with myself, because in one giant thunderclap of a you're an idiot moment, I realized I was doing the whole cliched eating-my-feelings thing. I didn't even think about it, I just did it. Instead of lashing out at the person who had upset me, I went about my business, and while doing that I wandered straight into Oprah territory. 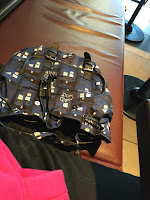 While I was at Starbucks, I posted a picture of my spiffy Doctor Who backpack that the Boy and his Significantly Better Half gave me for Christmas. I don't carry a purse, but I carry this, because it's awesome and I :heart: :heart: it.

I posted the picture because of this overly-enthusiastic woman sitting next to me who coveted it and was several degrees of OMG IT'S ADORABLE and OMG I HAVE TO HAVE ONE, and this little nagging voice in the back of my head thought she just might be the sort of person to grab and run. So I sat on part of it to make it harder to grab, and then took the picture.

No, she didn't take it. If she had, I would be asking y'all for bail money, not whining on a blog.

After I posted the picture, mostly amused, I went back to what I was writing. While I was lost in a scene in San Francisco, where Wick the cat watched as one of his companions walked right into a lamp post, a woman came in with her adult special-needs son, and I only noticed they'd come in because he was loud, making a singular sound over and over, and not noticing was (honestly) impossible.

Mom headed to the restroom with him, and we could all still hear him.

I went back to my writing. Tapping away at the keyboard, Wick was hiding his face in the Emperor's sweatshirt, because he did not want to see the aftermath of his friend stepping out into the street in front of a car. Just as Wick was about to look up again--because no one was screaming and the Emperor was only muttering things from the Bad Word List--the woman next to me leaned closer to me and said, "God, I hope those people leave. I don't know how I can stand it if they stay."

I didn't even look up, but she went on. "Really, what if they sit right here?"

I admitted, I did not care if they did.

"But you're working on something. He'll distract you."

I refrained from pointing out the obvious. "That's my problem, not his. He has every right to be here."

And that's when she went from just annoying me to me wanting to punch her square in the face. "Those people need to be kept at home so that normal people don't have to be bothered."

I have a temper, I know that.

I have the ability to inflict injury, I know that.

I have far less patience for idiots than I did even five years ago, I know that.

I wanted to punch her, and punch her hard, I know that.

What I did was close my laptop, and while I shoved it into my bag I said, "You know what? Fuck you."

Then I went grocery shopping, and found myself at Wendy's, trying to smother that anger with a burger I didn't need, and trying to figure out what I was most angry about. That she was a raging farktard? Or that I lowered myself to her level with my parting words?

But I do know that heading into Wendy's was something I did subconsciously; I wasn't all that hungry, and there was food at home had I been. I wasn't eating a burger, I was eating my anger, and that, frankly, bothers me.