I've spent the better part of the last 10 days staying with these two: 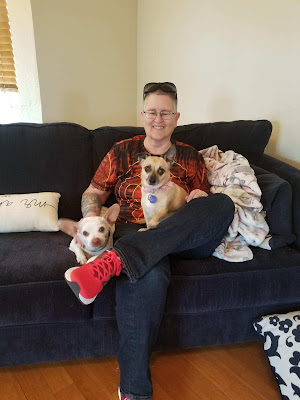 The Spouse Thingy and I split the time; I took the first 4 nights, he took the next 3, I took the remaining night, mostly for Max's benefit. He would have been fine if I'd stayed the entire 10 days, but he is also very attached to me and physically fine doesn't mean emotionally fine, so it was better for him if I came home for a few nights.

It was also a bonus for Butters, because he really digs the Spouse Thingy. He gets longer walks, often twice a day with him, and walks seem to make him the Happiest Dog in the World.

I came home for a couple hours every day to feed him; he can't go all day without food and the Spouse Thingy was sleeping all day. He'd eat and then head back to nap, probably expecting me to be there when he woke up.

I was not there. 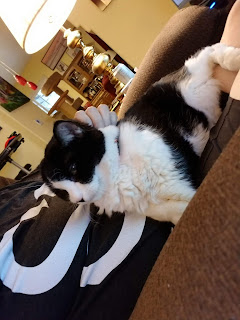 The first night I was back, on the break, Max attached himself to me. He usually sits in my lap and watches TV with me for half an hour to an hour every evening, but that night, my lap was Velcro and he couldn't peel himself up.

Other than 2-3 hours in the afternoon, when I drove back to see the dogs and have lunch with the Spouse Thingy, Max had access to me the entire time.

So, of course, other than that one night, he ignored me.

And then I went away again, but this time I didn't need to come home in the afternoon to feed him. The Spouse Thingy was up and awake in time to open cans for the cats, and it was easier for me to stay where I was, avoiding traffic.

He had everything he needed. He even got fresh steak twice in that time. And shrimp. He had the whole bed to himself. All the things he likes most.

I finally came home last night, and he planted himself on me.

That look...it was like he'd decided I was never coming back and couldn't believe I was there.

Normally when the Spouse Thingy leaves for work, I unlock the door and let him out, and tell him to have fun. Last night I stayed in my chair so that Max didn't have to move, and he stayed there until it was time to eat. After that he went to take a nap and I thought that was it, he was happy, and knew I was staying home.

But this afternoon I decided to go to Starbucks for a bit and get some writing done. As I locked the door from the outside, he sat in the window and watched me, and started meowing.

I told him I'd be back in a bit...but then realized as far as he was concerned, I was leaving him all over again, and that had just happened and he didn't know if I was coming home or not.

I'd barely sat down at Starbucks, but packed everything away and went home. He was still at the window, watching and waiting, and as soon as I sat down he jumped in my lap and stayed there until snack o'clock.

He keeps coming out to see if I'm still here.

There's not really a way to convince him that I won't be leaving him for more than a few hours at a time. So for the next few days I doubt I'll get a lot of work done. Instead, I'll be providing a lap for an upset kitty, and hoping that any errands I run don't upset him too much.