There I was, in bed and mostly asleep. The house was dark except for the odd lights glowing from nearly every damned electrical thing in the room, but it was still dark, and I'm used to those lights. Other than Max, and Buddah, I'm the only one home.

Then the light in my office popped on, flooding the hallway with bright light, which spilled glaringly into the bedroom.

I sat up sharply, uttering, "What the fuck?" as I scrambled out of bed.

Sorry, but when presented with sudden light at 12:30 at night, I have a potty mouth.

I'm not stupid; I didn't automatically assume there was someone in the house. If there was, and it wasn't the Spouse Thingy trying to slip in quietly because he'd gotten sick at work or something and had to come home, then it was someone new at home invasion.

At least, I don't think the average burglar turns on lights by which to see what he's doing.

I wouldn't have given it a second thought if the light turned on via a wall switch. Max has, in the past, demonstrated an irritating ability to flip light switches. While I admire the talent, I do not when it gets flipped in the middle of the night.

The wall switch in my office is blocked by a lamp. One, because the overhead light went Zzzzzzt when turned on a while back and began to emit an awful smell, and it hasn't yet been fixed. And two...things need to be kept in front of wall switches to keep Max from playing at 3 a.m. 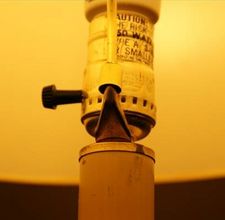 No, the lamp is turned on by a revolving switch.

You know the kind that required fingers to operate, and ideally opposable thumbs.

Yet, it was suddenly on, and I was scrambling out of bed. I looked into the office and he was stretched out on the tower, and started bitching at me as soon as he saw me.

I turned the light off.

I turned it back on.

The lamp works; it was off when I went to bed. There are no signs of anything nefarious happening. Both cats--other than Max bitching me out--were relaxed so I know there are no gremlins running around here, getting into things.

So how did the damn light turn itself on?

That would freak me out!! I have no idea how that could happen, unless it was on a timer (and you'd know, wouldn't you?) LOL

If it happens again, get rid of the lamp!! (I know you don't want to get rid of Max)

Um, something like that happened to me once (http://ackthbbbt.blogspot.com/2007/03/one-night-with-whoopie.html), but... I would never tell you that story in the middle of the night when you were home alone.

Please let us know if you ever figure it out, and please post something today so we know you are okay.

That is spooky! My Mom had one of the touch on and off lamps. All you had to do was touch it and it would come on. The kitties loved that one. A nose touch and instant light or a lightening storm and instant light. I learned to unplug it when I slept in that room!

We have one of those touch lamps. Ichiro loves it... And it's really annoying. Sometimes you don't even have to touch it and it comes on.

I had the same creepy thing happen. It took a bit to figure out but I think when I turned the light off I did not turn the switch completely off so it was just kind of in on off limbo. It snapped back to the one position.

Or it could be the gremlins!

I think--not 100% sure, just think--that because I have a 3 way bulb in it and the middle part burned out, that when I last turned the lamp off I actually turned it to the middle...if the filament dropped onto one of the other live ones...instant light.

That's better than thinking the lamp is alive...

You actually got out of bed to check it out? I'd have my head under the covers but I read far too much Stephen King, and lately have been devouring horror anthologies: Cemetery Dance, Spinetinglers, Dark Delicacies,the Richard Matheson 3- volume collection, Clive Barkers' The Dark Descent...well you get the idea.
"shiver"