Yesterday's ten miles did not do the Spouse Thingy in--which is pretty impressive since his longest nonstop walk up until then was between 6-7 miles--but he did need to find some relief with some Ibuprofen in able to drag himself out of the house to run errands.

No, I'm not mean. I didn't force him anywhere. He needed a few things from the fabric store, and there was the lure of potentially good free samples at Costco (which kinda sucked today. No free lunch.)

While he was in the fabric store, I headed to a nearby department store; not that I don't totally enjoy being amongst the bolts of brightly colored fabrics and threads and ribbon like binding tape (cough) but we walked in and the air was heavy with a variety of aromas that probably smelled good to other people, but were perfumey enough to set my lungs on fire.

Since I enjoy breathing, I went elsewhere.

And promply found this jacket, which I coveted from 100 feet away: 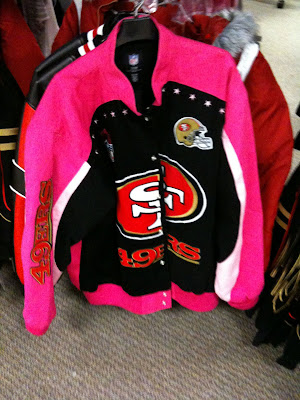 A San Francisco 49ers jacket with hot pink sleeves; there's also a pink ribbon on the chest, though it's folded over and not visible here. They only had one, and it was $199...and a size 3XL.

That didn't keep me from trying it on and being  bummed out when it was way too big.

I took the picture to remind me to get online and check NFLStore.com, because, hey! It's an NFL thing and if anyone's gonna have it, they will!

Except that it was apparently something from last year, and while they still have some things from their breast cancer awareness campaign, this was not one of them.

Amazon didn't have it.

I had just about given up, when eBay popped into my head. I thought if someone had it, it would be at a premium, but looking wouldn't hurt. Much.

Damned if I didn't find it within 15 seconds of signing in.

Delivery estimated between Sept 3-6...so I should have it for the 3 Day. And it's gonna be chilly on Treasure Island, so a nice warm jacket is a good idea. Right. Ignore the 3 other jackets I already own.

Spouse thingy in a fabric store?? Does he sew, knit, crow-shay?

Spouse Thingy sews...he makes spiffy and awesome looking scrub hats to wear at work. He can also do needlepoint, cross stitch, and crewel, though crewel kits seem to be extinct now...

You are going to be the pinkest walker ever! Finding any really good kits for doing needlework has gotten harder. I guess it's not very in right now...

Amazing find Thumper!!!!!! A little painful on the eyes, but awesome nonetheless!

I'm sure Middlesex County Cricket Club over here used to do pink sun hats as part of their kit ... Can't see one on their online shop though.

They switched their one day (coloured instead of white) cricket kit to include pink a couple of years ago for Breast Cancer awareness.

Next time I go to their stadium I may have to check out the club shop - Pink Hat = Free Cake when if the girls in the project do the Pink = Cake day again :-)

PS Not a Middlesex fan, which is why I hadn't checked out the Pink stuff already :-)