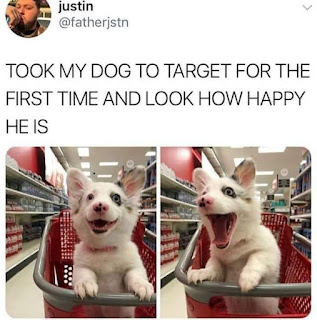 I post a lot of memes on Facebook. I have 126 albums loaded with somewhere between 200-215 images each, just things I've run across online over the years. These memes might amuse me, confuse me, upset me, or a mix of all. They might be intended to spur discussion, or they might be there because I know someone in my friends' list will get a kick out of it.

I used to post 2-3 times a week, and for a while during the COVID lockdowns I posted daily. Now I'm down to once a week or so, but...not intentionally. My intention is usually to upload what I've saved to y computer at least twice a week, but the day slips by and next thing I know I'm in bed thinking, "Damn...well, I'll do it tomorrow."

Aside from what that does to my notifications the next day, there's a downside to it. Facebook bots tend to snoop and deem a meme here and there to be against their standards. I protest, usually win, and we all get on with things. Only one time have I been penalized, and that was to take away my ability to buy ads for 30 days.

I've never bought an ad, so...sure, I learned my lesson.

Still, my wrist gets a little sore from being slapped so often, and I figure it's a matter of time before they lock up my profile as punishment for sharing things created by other people, that have been shared so often that finding the OC is damn near impossible (like, I'd give credit if I knew where they were born, but...)

I've mused about and tongue-in-cheek threatened to start another FB account, just so I have a place to land when the inevitable happens, but so far I haven't pulled the trigger. I have a few friends who have done just that, and it seems to work for them, so maybe this week... maybe. I'm not sure why I'm dragging my feet on it, but I'll get it done eventually.

A while back a friend of a friend commented on one of their posts, and I truly dug their name...and then was told it's the Australian nickname for Karen. It was like the heavens opened up and poured sunshine all over my coal-black soul, and the only downer was that I had not known that 50 years ago when I begged my parents to let me change my name.

I was totally ahead of the curve on the whole hating-Karen thing. The difference is I didn't hate the people or ascribe poor behavior to it...I just loathed the name.

I still hate it. I regret not changing it when I became a legal adult, but by then I didn't want to hurt my parents, and after they were gone it felt too late. Too many people are just used to using it, and asking them to change felt unfair. And now? Holy hell, y'all know what a clusterphk the name has become. Try ordering in Starbucks and having that name called out.

My reluctance to impose upon other people doesn't mean I can't have a new FB profile with essentially the same name, just one from another country. Ms. B Fug...I'm stealing your friend's name.

So if you get a friend request from a Thompson named Kaz in the next few weeks, it's totally me. I'll make sure the profile picture and header make it clear; I'll do 90% of my usual stuff on my usual account, but sooner or later I am not going to win a protest against the FB bot, and I really do need that connection to my friends.

Also, totally not related, 2 news shorts posted to The Lost Boys of EveryWhen. Along with links to download them to your favored e-reader.

I thought about swapping to my middle name at uni but dropped that idea because I knew that I wouldn't recognise being called by that name :-D.

PS I love the memes, they're awesome and brighten the day.

I haven't bothered to join Facebook yet, there are some people i wouldn't want finding me anyway. Maybe if i ever have grandchildren it might be worth it, at least under my initials.