The wind sucked out of my blogging sails; I fully intended to blog as many days this month as possible, but then a Big Bad Awful happened, and my heart was not in it. 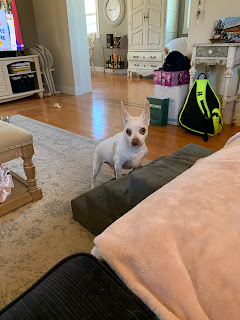 On Sunday, my son's dog Butters--known to Max's friends as That Damned Dog Butters--was helped on his way to the Bridge. The Boy knew several days ahead and took time off work to spend that time spoiling the hell out of him, which is what this wonderful pup deserved.

I mean, his life started out hard under someone else, and my son truly rescued him. Butters was afraid of men, but with Curt's patience and deep, unwavering love and commitment, Butters thrived. When Salina came into their lives, well, Butters got exactly what he needed, and was one happy dog.

Mid-September, they went to Mexico to celebrate their anniversary, and I got to stay with the pets. It was clear then that Butters was declining, but to me he just acted like an old man. Stiff, he needed help going down the stairs to outside, and he slept a lot, but otherwise he was just old.

He made me, as Max would say, 23 kinds of happy. He ate all the food I put in front of him, and asked for more (and damn right, I gave him as much as he wanted, and extra treats to boot.) And one wonderful afternoon after I brought him inside from some time spent in the back yard, he raced through the house, those ears bouncing, sending the cats running for the other room. There was joy in that, and that's the image I'm holding in my head. Butters on a Very Good Day.

The Spouse Thingy was able to spend a lot of time with him over those few days, too; lots of time spent outside, sniffing all the things. There were no walks, but there was couch time with pets and head skritches, and unlike the first time they met--when he was still afraid of men--Butters melted into his hand and loved the attention.

I think that's what he wants to hold onto; Butters enjoying him, not one bit afraid.

We knew it was coming, and braced ourselves Sunday morning, not wanting to leave the house, just waiting. And when the text came, we both broke. I spent the day crying, and the Spouse Thingy admitted he didn't dare go near any of the equipment in his wood shop because he couldn't see through the tears. I'd expected to be sad; I'd expected to cry. But I didn't expect it to burn.

We loved that puppy...Curt and Salina LOVED him. No one else could have taken better care nor loved him as well as he deserved than they did. I'll forever be grateful that such an amazing soul stuffed into that small body found his way to the people he needed, and who needed him. Butters was a big dog in a small body, and I can't imagine there ever being another one like him.

Comforting purrs to you all.

I’m so sorry for the loss of your and your son’s beloved doggy. I hope he and psycho kitty are racing around in the hereafter having loads of fun.

My heart aches for your loss, and i'm crying with you.