For background, it helps to know that Max was trained to weigh himself. If he went into the bathroom with me, which was pretty much every day, before I'd open the door to let him back out, he had to step on the scale. It was right next to the door; most of the time he did it because he was in a position to bolt out when the door was barely cracked open, but it created a habit that made it easy for me to keep track of his weight.

Buddah...nope. I tried to get him to sit on the scale and was met with growling, nipping, and him jumping up on the vanity where he growled and nipped a little more. 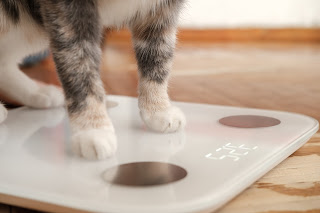 Max's self-weighing was a helpful thing in his last couple of years. There was a number we held onto, knowing he was hanging onto a healthy weight. A few months before he died, though, the number started going down, and a couple of weeks before, he dipped below 10, which is as low as the scale will weigh. On his last day, the vet weighed him at 8 pounds...the same weight he was when the Boy brought him home at 4 months old.

Now, here we are, nearly two years after Max left us. Yesterday I went into the bathroom and closed the door, because even though there's only one other person in the house and he was asleep...I do not need an audience, especially a surprise audience should he get up early.

After I washed my hands, I turned toward the closed door, and something caught my eye, so I glanced down; the digital scale was synching itself, though I had not been on it. Curious, I went into the living room to get my phone and checked the app.

Make of that what you will.

Yeah, sure, maybe the scale was just doing what digital scales do, and if not for the registered weight, I'd have shrugged it off.

Brat weighs himself, too. And I partially guage his health by that as well, but I never knew another cat who did, until now.

That pretty spooky! Good to know he’s at a healthy weight again tho! My cat often comes in the bathroom with me in the morning. My routine is to weigh myself after using the facilities. So he will sometimes go sit on the scale while he’s waiting for me. My scale doesn’t give an audible readout or connect via Bluetooth so I don’t know what he weighs. He’s a very large Maine coon tho and well north of 25 lbs. I should get a new scale!

That is pretty neat. Just the kind of thing it seems Max would do !

Sounds like Max did a drive-by from the Bridge!

Fascinating. Maybe he's a guardian angel now, watching over you.