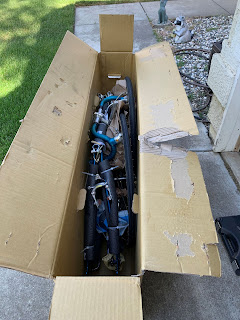 I should be excited.

After my post about the bike I had as a kid, a friend found said bike on eBay and within a few minutes, I bought it. The listing looked great; it was a restored 1974 Schwinn Continental, same blue, same grip tape, same everything.

It arrived today in a box that looked decent; no outside bangs or tears, perfectly acceptable condition, as good as other bikes I've taken shipment on, bikes with no shipping damage. 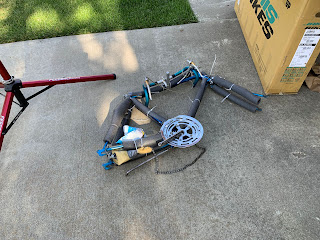 I was not daunted by the idea of assembling this bike; it wasn't any more complicated than the last two and I didn't screw those up. So I carefully removed loose stuff from the box--the wheels and paper--and laid it down, and promptly said things off the Bad Word List.

So I was already ticked off. But I began cutting all the zip ties holding the protective foam on, and it just got worse. 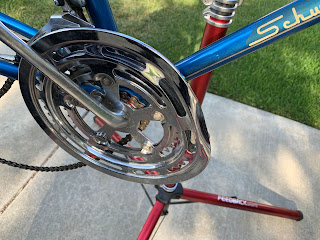 But we'll start with the chain ring.

Bent enough that I don't think that with the chain in place, it will spin. But I decided not to completely lose my chit yet, because who knows? 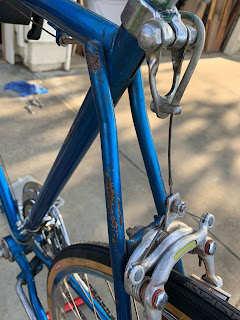 This "restored" bike was absolutely filthy coming out of the box. But worse than that...

I didn't expect pristine because, face it, the bike is 47 years old.

But I did not expect so much rust on a restored bike; I didn't expect pitted components.

Perhaps I should have, but the listing did not mention these things.

I'd like to go back and check it, but once something sells on eBay now, the listing comes down. 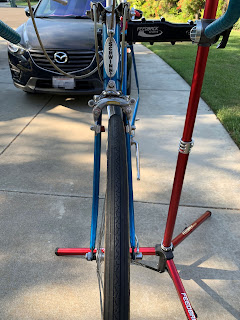 No matter what I do, how tight, how loose...it's not straight.

I'm not sure it will ever be straight.

The quick release axle looked straight, but...who knows. By this point I am not surprised at all.

In any case, the skills to seat it correctly are apparently beyond my set and I don't have truing equipment anyway, so... 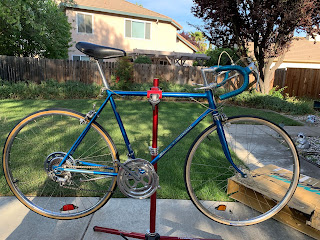 Now, if you don't look at it too closely, it's a shiny, decent looking bike.

But if you get close, oh holy hell.

It's missing the derailleur hanger, so I can't even get that in place.

Pretty sure that if I could get it on, and spin the wheel or move the pedals, the cables would snap.

Can it be made rideable?

I am trying to come up with the right words for an eBay review that won't get me banned...I'm not sure that even contacting the seller directly will do any good. If he sold this as a restored bike he doesn't give a shit what the buyer thinks. And now I question the reviews he does have, because they were good and they were why I took a chance.

Worst case, I clean it up and it hangs on the wall. But dammit, I really did want to ride it, at least a little.

Oh no, that really sucks. That is definitely a dishonest seller. There's no way that should be called a restored bike.

I do hope you give that negative review, because that is the only way people can be warned about unscrupulous sellers.

It really is a shame you can't get your money back. It's also a shame that a negative review would get you banned, if you can't tell the truth, then something is wrong with the whole system.

If you paid by credit card, can you lodge a complaint that way? Gads this sucks.