Carmi wrote about his 28 year old Specialized Stumpjumper the other day, and it renewed in me the feeling of really missing my first "real" bike.

I mowed lawns all through 1974 and into 1975 to raise the money to buy a new bike; I'd had a purple banana seat bike (probably a Schwinn, but honestly I don't know) that I had coveted from 2nd grade on, but I didn't get it until 6th grade when I was really too old for it. That purple wonder was fun, but by the end of 7th grade it was mock-worthy and I took a lot of crap for riding a little kids' bike.

I began to covet something new, and all I wanted was a 10 speed. I knew there was no way in hell I would get it for my birthday or Christmas, so I asked if I could take over mowing the lawn. My parents had been paying the son of a family friend $4 a week to cut the grass, and were (surprisingly, to me, because that was "boys' work") agreeable to it.

So I cut the grass and was given $4 a week for it during months when it needed cut. By the end of 8th grade, I finally had enough to get the bike that I still desperately wanted, and in a stroke of luck the bike shop had it in a metallic blue that damn near made me squeal. 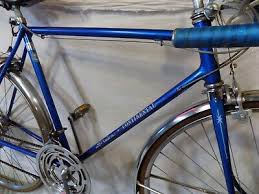 It was a 10 speed Schwinn Continental, very much like the one pictured, and I loved that damned bike. The color was perfect. The grip take had metallic flecks. It was so well balanced that even my 13 year old self could feel it I rode it everywhere until we moved from Texas to California, and once we were settled in a new house, I rode it as often as I could...which was not as often as I wanted, because school and real life gets in the way.

[It did prompt my dad to complain that I "never" rode it...I did. While he was at work. Somehow that didn't compute LOL]

When I decided to take history and English in summer school (for fun...yes, I was that kid) I rode it to school most of the time, though by then I had a driver's license and access to a car. There was something about being able to ride wherever I wanted, just for the joy of riding. For no reason or any reason; that bike was my first taste of teen-aged freedom and before I got my license, it was my way around.

I dragged it with me to Utah and BYU my junior year...where I sold it for $50 just before senior year.

Now, granted, at the time $50 was a decent chunk of change. And it was a matter of sell the bike or not eat for a few weeks, because money was super tight, but I have always regretted it.

I want that bike back.

Every now and then I surf through eBay, looking for one for sale from someone who will also ship it, but I haven't found one in good enough shape. But if I find it? Surprise, Spouse Thingy, I'm getting another bike.

I mentioned it to a friend online last night, and her reaction was puzzled. Like, isn't cycling a new relatively new thing for you?

I mean, it's fun to hear all the newby-advice and get those teachable moments, and no one needs to be stopped so I can say "Yeah, I started riding pretty young" because 1) new bike tech is new to me, and 2) cycling now means something different than it did then, and the terminology is different than it was 40+ years ago. I did take several years off more than once and in between the Continental and more recent acquisitions, I had a lot of really crappy stuff barely worthy of being called a bike. But I did ride.

I stopped what, 8 years ago for a bit after passing out on a ride. But then came the screaming pink electric that gave me the confidence to give it another real go...and here we are, just a little obsessed (and right now angry with myself for taking a break just long enough that I am out of shape again.) 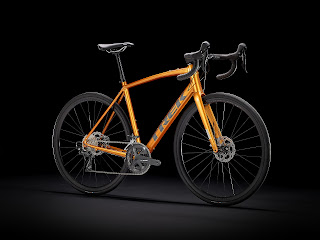 I'll probably never find that Continental again, and that's all right. I remember how it made me feel. And I have a bike on order that's coming hopefully sooner rather than later, that shows promise in being today's version of that Schwinn, with that feeling of freedom that comes when zooming down the road. It's not top of the line, but it's all I need and all I really want.*

Now all I need is to win the lottery so we can move somewhere close to safe, accessible bike paths. Because drivers? They suck, and I hate sharing the road.

*Oddly, no, I don't want a carbon bike. In fact, I ordered a bike a couple months ago because it was available before this one is supposed to arrive and it was at a great price, but realized after I placed the order that it was a carbon frame. It went back the same day it arrived, box unopened.

I totally get it. I got a Nishiki 5-speed when I was 12 or 13 and took it to college. I gave it to Goodwill in Goleta before moving across the country in 1992. I got a new bike with 21 speeds at Madison's Bikorama sometime in the late 90s, and I've never been as happy with it. Was it a great bike? I don't know, but it was my bike, familiar and comfortable.

I had a Schwinn 10 speed too. I loved that bike and road it everywhere. Got forced off the road onto gravel once. The nurse gave me a biking lecture while she picked the imbedded gravel from my knees. Still loved the bike.

I ended up giving it to my niece, who sold it. I still think of that Schwinn sometimes. But my Masi Strada is a really pretty ride.

There's no feeling so free as getting to ride wherever you need to go.