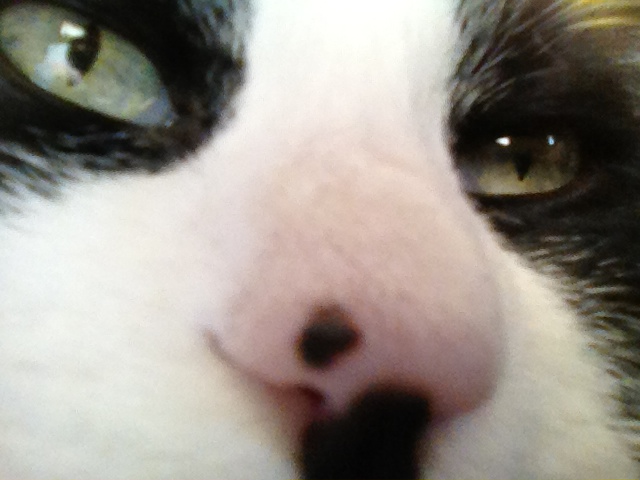 He's been waking me between 4:15 and 4:45 most mornings for quite a while. I could not figure out why; he's not hungry and if he was there's dry food out. He doesn't want attention, really, because I've tried petting him to get him to shut up. He just seems to want to wake me up when he knows I don't want to be awake.

But for whatever reason this morning, I was semi-awake at 4:45 and heard a noise a lot like a car door slamming. And within 5 seconds, he was there by my head, meowing at me. I rolled over just as he jumped down and ran off, so I followed him.

He headed straight for the front door, and looked out the narrow door-length window there...like he does at 7:15 when the Spouse Thingy usually gets home from work.

And it clicked: one of the neighbors is either leaving for work at o'dark-thirty or they're coming home, and he thinks it's the Spouse Thingy. He wakes me up because YAY! He's home!

I can only imagine his daily crushing disappointment when that door doesn't open. I don't know how long he waits there, but I'm guessing it's 20 minutes or so, based upon how long it took him to stand in the doorway to register his daily complaint.

Max needs snuggles, he's so sad so early every morning.

Max you are Such a good Watch Kitty!