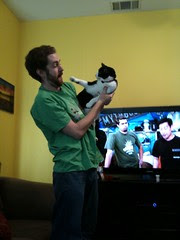 When the Boy told Max his plans, Max leaned back and said "Shut yo mouth! No way!"

Ok, no. But he might have. You know, if he could speak.

Next month the Boy is going to engage in what is fondly known as The Polar Plunge. He's going to jump into some extremely cold water for the sole purpose of helping to raise money for the Special Olympics.

Fine, there might be a girl woman involved. And perhaps beer. But mostly, he's trying to raise money for a really good cause.

Because I would really like to see him freeze his nads off, I'm trolling for sponsors. A buck here, a buck there, it all adds up. And if you can't sponsor, it would be awesome if you could spread the word for him.

This is great. Thank you for letting us know about it.

A polar bear plunge! Suggestions from those who jump into Lake Michigan on New Years Day.

Get in, get out and get into warm dry clothes ASAP. ASAP means in five minutes. A nice warm motor home or a tent that can be heated is good to have.

I'll have to come back on payday!

I think with smaller kids, you can just toss 'em in, no special event required :)