Because we are hard core partiers, and the Spouse Thingy finally had a New Year's Eve off, we decided to go all out and celebrate in a major way this year.

Which means, basically, that we were all, "Maybe we'll go to a movie and then go get some Chinese food," which eventually became, "We really should have picked a movie sooner because it's getting kind of late," and then "Well, call and see if the Chinese place is still open."

We headed out to find this brand new Chinese restaurant/Sushi bar (yup) and behold, it was right where the last Chinese place was located in beautiful downtown Dixon. We peeked in the window and decided that we might be able to get a table, what with the 5 other customers inside spread out between the 6 foot long sushi bar and two of the booths.

This is one of those spectacular places, where the decor is mid-century modern with dashes of duct tape on the vinyl booth seats and unlit paper lanterns dotting the ceiling. When we walked in we were immediately taken with the heavy smell of grease in the air, and the 19" TV perched behind the cash register that probably had full use of its color spectrum in 1985 (the TV, not the cash register. I could rephrase that but I'm too lazy to. Also, I dangle participles. Or articles. Whatever.)

It was so inviting that of course we stayed, and because I am hard core, I ordered the Kung Pao chicken because it had a little hot pepper drawn next to it on the menu, and some chicken chow mein. The Spouse Thingy, being slightly less hard core, ordered sweet and sour chicken, the yardstick by which he measures all Chinese restaurants.

He surmised that this end-of-year dietary blowout just might wind up being a cause of massive amounts of weight loss, in the form of bodily evacuations of the unpleasant sort. And hey, what a way to start a new year, ten pounds lost in one night.

The thing is...the food was excellent. The chow mein was not too oily (as it is at the other place we've tried a few times) and the sweet & sour chicken was just right. The Kung Pao was awesome, and not too spicy.Well, not until the Spouse Thingy
pointed to a red pepper on my plate and said, "Go ahead. Take a bite of that." 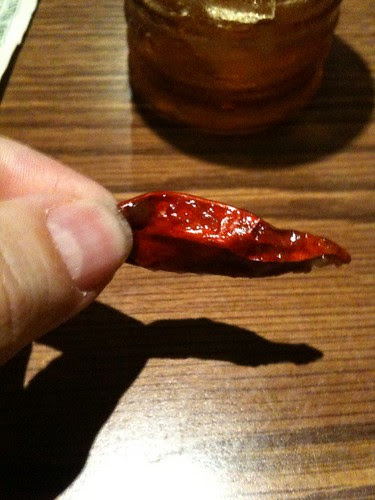 The red hot chili pepper in my Kung Pao Chicken

Now, because I am hard core I forked one of these bad boys up and bit off the end. And it wasn't so bad, kind of spicy and not much flavor...

AND OHMYGAWD OH HOLY HELL WHAT HAPPENED TO MY MOUTH!!???!

Almost instant fire. The pain began at the tip of my tongue, and with the force of a culinary blowtorch it spread to my lips and the roof of my mouth. It was burning piled upon a vice clamp being squeezed over my lips and tongue with fire ants and a sadistic kid with a magnifying glass under the sun.

The Spouse Thingy laughed, until he realized I was in some real pain.

And then apologized, and then laughed some more.

I shoveled in the rest of the chow mein, because hey, it certainly couldn't hurt. And then there was the fortune cookie, which when sucked upon, actually did help. As did the promise of ice cream...when all else fails, give the hard core New Year's Eve partier some Dreyer's slow churned chocolate ice cream, and pray that the fact she is also lactose intolerant doesn't rear its ugly head.

After all that--again we have this hard core nature--we headed home to feed the kitties.

Because that's how we roll.

You are braver than me. I would have left that pretty little pepper sitting right there on the plate being garnish. Glad you had such a memorable new year's eve. :)

(I ate a little black-colored pepper at a Chinese restaurant once, so I TOTALLY understand your pain....)

Your New Years sounds almost as exciting as ours... except for the hot pepper part. My humans know better...

My spicy tolerance is at least 10x yours and even I dont eat the pepper on the kung pao plate...

Some of those red peppers come with the sesame chicken I eat at my local noodle shop. They help spice up the dish but . . . don't eat them.

I just took out Chinese (sesame chicken w/brown rice, of course) tonight. I went out half expecting it to be closed, since it was 11:15pm, but they were open!

Sometimes the best food is found in places that look like the worst dive in town.
Hubby & I are not hard core either, but we are cheap. We regularly go out around 9 pm because that's when the 2 for 1's and half price appetizers happen. -sss's mom

You are very brave. I don't even look at any thing with a pepper by it!

LOL! Your 'heading out to celebrate' cracked me up! It also sounds so familiar.

Uhh, OY about that pepper! OW.

Sweet and Sour Pork is my gage of a good Chinese place....In most places it seems to be "all about the breading" and then they fry it much too long. If you find someplace that does it right you need to eat there lots so that they stay in business...um. I think I meant "batter" but that doesn't read as well.