The Christmas before he died, the Spouse Thingy gave his dad a bright pink t-shirt; as the present was opened and the color noted, his reaction was pretty much what the hell did you DO? (Spouse Thingy actually giggled a lot in the store when he found the shirt...so did I. Because it wasn't just pink, it was PINK.) Then he finished opening the package, unfolded the t-shirt, and saw what it said.
TOUGH GUYS WEAR PINK
And indeed he did. One of our favorite pictures of the Spouse Thingy's dad is him in his bright pink t-shirt, and now the shirt itself is hanging on the bedroom wall. No one else will ever wear it again. It just wouldn't fit anyone else, even if it did.

In my head, my father-in-law was always Superman There's no other way to describe a man who could seemingly do everything, who was liked by everyone, and who left such a big hole when he was gone that there's still nothing to fill it. 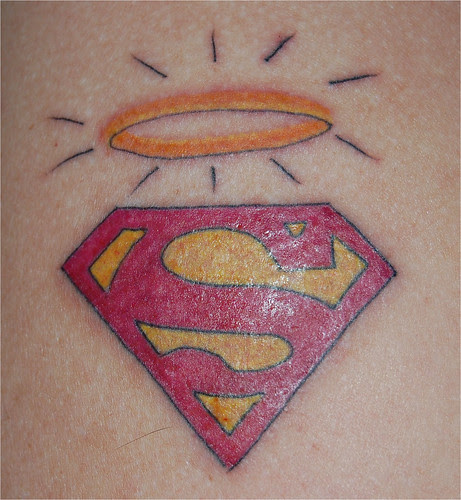 Yes, it's pink.
My father-in-law was tough that way.