Ok, wow, I did not realize that I’d gone so long without posting anything here…which goes to show how much I talked about my cats. Without those furballs, I don’t seem to have a lot to contribute, unless you want me to geek out over all the new Star Trek choices or Doctor Who. Because I can do that; especially with the new Doctor announcement, I can squeal a lot.

I can squeal over what I’m writing…I’m about 150 pages into a Wick book (which has been surprisingly difficult to write without Max sitting here meowing at me nonstop; I’ve scrapped hundreds of pages in the last 6 months but I’m in a groove now.) And when I’ve got the vomit draft done, the first draft will debut online first, on its own site. Will I monetize that, when I’ve never done that with a blog before?

Probably, even if its just a tip jar. Max’s books are how we generate our annual charity donations, and last year, without a new book, it was a bit…slim…by the end of the year. The Spouse Thingy made up the difference for the most part, but still. That was something I felt helped me make a contribution, and I’d like to continue it.

Other book in the works is the cycling book. I’m nowhere near as far along with it, but that’s fine. I’ve done some long-term test rides on a couple of bikes and have notes; the cargo bike was terrific but I sold it to make room for the next one, and it’s a keeper.

Today I took delivery on 2 folding electric bikes, and I’ll ride them over the summer…but not solely because book or not, I have a 300 mile goal in September for the Great Cycle Challenge and I can’t see doing it on one of these. 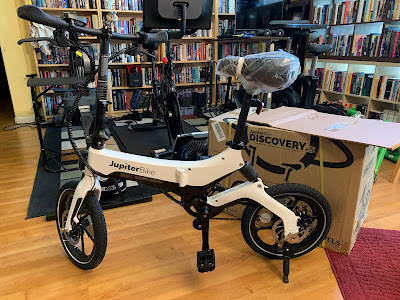 By the time I got them put together (10 minutes each bike, tops, it was mostly unfolding the frames) and charged, it was 90 degrees outside. We opted for a very short test ride to the little park nearby, where we rode around in circles for a bit. Only 1.5 miles total, but I can already say that I am too tall to ride this for more than 8-10 miles, which is fine because I suspect that’s as long as the battery will last.

It could turn out to be a fun in-town or take-to-a lake kind of bike, or for someone with a short commute to work. But, we’ll see. It’s hard to tell anything in 1.5 miles.

Well, it was easy to tell I did not get the clamp on the seat post tight enough, as evidenced by the seat sinking all the way in when I sat on it. That was slightly undignified. Would have been funny if it had happened slowly, while in motion, leaving me to wonder WTF was happening.

Too many tacos, Karen, that’s what was happening.

As we’re rolling into summer, that’s what I’ll be doing: writing and riding, often at the same time because that’s how my brain works. I get the mental work out of the way when I’m on the bike, and get the words written down when I get home. And sometimes, they even match up. Sometimes. More often it’s: ride, come up with a sterling narrative—a BRILLIANT narrative, one destined to ear awards—get home, sit down, and that’s when the drooling starts because my brain just nopes right out of there.

At least my brain is doing something.

It's good to hear from you. Have you tried, as you are riding and thinking of something to write, narrating and recording it? Perhaps your phone, with a bluetooth earpiece and microphone, could help.