This year was not as bad as 2020 was, at least not for us. But I am still smarting from 2020, which kinda left a simmering wound on 2021, and I am just starting to not hurt as much as I was this time last year. If you'd told me I would spend the better part of a full calendar year grieving two cats, I doubt I would have believed you. But here we are, more than a year after they died, and after a lot of false starts thinking I was ok, I am finally ok. 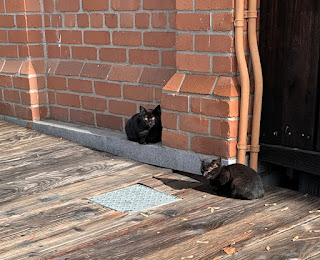 These beautiful kitties made me realize that yes, I have healed enough to (almost) be ready for another pet. They were hiding under the space between the boardwalk and a restroom, and popped out while I sat on a bench to wait for the Spouse Thingy. There was a third, but he scrambled back under when my phone came out.

I really wanted to scoop them up and bring them home. They're completely feral, though, and that's not something I'm ready (or skilled enough) for.

But...I am very close to being ready for another furry friend. We've been talking about a dog this time, and I'd really like another Golden Retriever. So maybe by spring...

2021 starts with some rearranging of furniture. We figured out a layout that will allow me to keep my beautiful desk but add another smaller one I can actually write at, and at the same time we'll wind up with more room for the Peloton, rower, and bikes inside.

Unless they just don't fit, I'll have 2 bikes on trainers; one on a typical wheel-on trainer (both wheels still on the bike) and one with the front wheel off and rear wheel resting on rollers.

This is all a precursor to the sweat equity that will go into one of my 2021 projects:

If my back allows it (and lately that's questionable) on the 1st of January I'll start racking up miles and taking notes for a new book. We (meaning the publisher and me) expect this to be a year-long endeavor, during which I'll test out a few different type bikes and approach it all as a senior with some experience riding, but not as a hard-core dedicated cyclist.

It's my favorite thing to do and my bikes are my favorite toys, but I am not a hard-core cyclist...who knows, maybe I'll become one. To start, I'll be riding a road bike, an electric road bike, am electric cruiser, a cargo bike, and a single speed. Possibly a crank-forward ebike, too, if the Spouse Thingy lets me borrow his. I'd also like to find an e-trike, but just to rent for a few days, since I've had a few people ask me about them.

And if I'm lucky, by the end of the year, a large part of my asterisk will be in the rear view mirror.

I am not happy about the weight gain of 2021, but also? I am not horrified by it. And I've reached the point where I'll be okay with whatever the results are. I'll get into better shape no matter what, barring injury. If my weight shifts, fantastic. If it doesn't? Meh. I have been battling my weight my entire life, save for a few years in my teens, and then in my late 20s and early 30s when I was training in TKD but also too nervous about it to eat. Other than that, I've been overweight.

It's time I was okay with that. I refuse to torture myself with strict dieting; I've done it, the weight never stays off. So now I eat normally, I'll exercise, and let the flab fall where it may.

We very nearly ended 2021 with a tragedy, one that left me tossing and turning for a while last night. I was upset and had that oh-no weight in the pit of my stomach.

The Spouse Thingy's Nintendo Switch would not turn on. We were pretty sure it had bit the dust.

Now, laugh if you want to, but one of the things we did a lot of this year was play a lot of Animal Crossing together. Not on the same island, but in the same room. We set up Max's old room to be a game room, with each of us having our own TV and Switch. We've swapped stuff and watched each others' islands go from nothing to pretty freaking sweet, and the idea that he'd just lost it all? 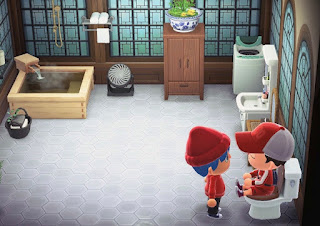 It was oddly upsetting.

He managed to get it to turn on and did a soft reset, but by then I was asleep. This morning I spent some time looking for a new one online, and there's a nice, long delay in getting a new one. I'm almost tempted to order one for us to have a backup if either of ours breaks for real.

Hell, if it had been mine, I probably would have cried. I like the idea of starting over, but I'd want my main player and all the money he's accumulated...I'm greedy that way. If the Switch croaks? So does he and all his $$$

We are so winning the whole Being an Adult thing.

And yes, trapping him on a toilet made me LOL

Speaking of Animal Crossing...it's calling to me. Tonight I am going deep sea diving, and then just might tear down an entire cliff to rebuild something else.

When you are ready, the animal that is meant to be in your life will appear, and yes, ferals are not easy to work with.

Love your attitude about the flab falling where it may.

Growing up is mandatory, but growing old is optional, keep playing andA blessed and beautiful Happy New Year to all of you! trapping him on the loo.

A blessed and beautiful Happy New Year to both of you!

Andrea and the Celestial Kitties said...

You make me want to find my Switch and my animal crossing game! it's been quite a while since I had it and the fun pictures make me miss it more and more, lol, so thanks! And hope you have a better, wonderful new year!