I finished the Great Cycle Challenge with a couple of days to spare, hit 300 on the nose, and then took a few days off. I didn't intend to take more than one day off, but two nights of 3-hour sleep made sure of it. So fingers crossed that I sleep tonight, so I can get outside early enough to get some miles in before it gets warm out.

For October, I signed up for a breast cancer virtual ride; 150 miles to be ridden by the end of the month. No sweat there, I can do that. And double no sweat, I'm not fundraising for it; I self-funded (tax deduction!) and if something pops up I won't feel too bad about not finishing.

But...more than that, there's this: 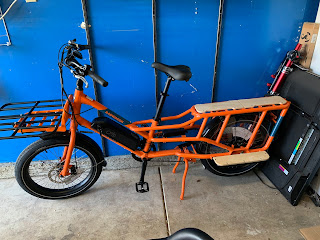 Before y'all roll your eyes and grunt, "Not another bike," this one is largely work-related. My editor added to the bike stable because (or "on account of," if you're Hyrum) I signed a contract to write a book on cycling in your senior years. Part of that will be replacing as many in-town errands as I can, and when I slap a basket on the back of this, I'll be able to haul a ton of groceries.

That front thing is going once Rad gets small baskets back in stock. It's got storage area, but for some reason it bugs me visually. That seat is also going because...ow. It may be the worst saddle I've ever been on.

I'll take it for a trial run tomorrow after I put the big basket on the back. Presuming I can wrestle the screws loose. The kid who delivered it said they might be a bit tough.

I'm damned good at that.

Looking forward to the new book! As a not very good almost senior cyclist, I am always interested in any information that will make me better.

You'll make those miles, and i also am interesting in finding out about how riding for errands works out. If i ever get to retire, that's what i'd like to do, ride to anyplace close instead of driving (as of now, almost every one of my errands is done on the way to work, so i have to drive).