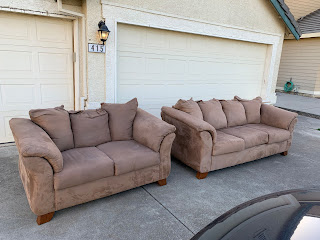 Sometime in 2019, we cleared stuff out of the spare room, jammed a sofa and love seat in it (and really had to jam them both to get them through the door), covered them with blankets, and declared it to be Max's bedroom. He needed a space of his own, away from Buddah, and it took approximately 1.4378 minutes for him to accept the offering and to take his first nap stretch out on the back on the loveseat.

Eventually he decided that the back of the sofa was the best spot, because he had a better view of the hallway and of Buddah if he was on his way in. That didn't happen often, though. Buddah seemed to understand that the room was not his, and the few times he ventured in he took the furniture on the opposite side of the room. With only a few rare occasions, it was the neutral zone.

Max loved that room so much that it made the hassle of getting the stuff that had been in it--a treadmill, for one--out and the furniture in totally worth it. It was a comfortable, safe space, and in his last month he rarely ventured out. 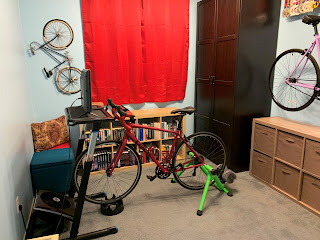 This week, it was time to take the sofa and love seat out. I found them both to be uncomfortable (but I and also picky) and I was honestly tired of peeking into that room, expecting to see a sleeping kitty on the back of the sofa. The blankets were long gone, and I'd sprayed them both with Kids & Pets in November so they didn't smell anymore; where once I thought we'd have to trash them, they seemed good enough to give away.

We pushed them out--it was a hell of a lot easier than getting them in, for some reason--and put them outside, on the driveway. I put a notice up on Facebook on a local page, offering them up, and within an hour someone texted, wanting them. 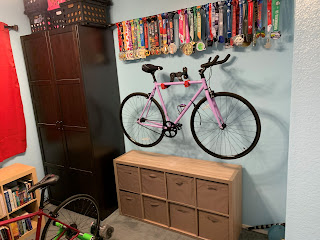 I didn't really care who took them or why they wanted them, for resale or personal use, it didn't matter. But this person...a teenager about to move into his first apartment, who had literally nothing to put in it. It made me wish I'd had more to give the kid, but mostly, it suddenly mattered that Max's treasured sofa and loveseat were going to someone who really needed them.

The room is no longer Max's bedroom, and I somehow managed to easily make the switch in my head. It's now the bike room, with one on the trainer and one hanging on the wall, with room on the floor for another if I ever have a reason to bring another into the house.

I filled his space with a Dammit Machine.

I can hear his exasperated little sigh from here.

♦♦♦♦♦♦♦♦♦♦♦♦♦♦♦♦♦♦♦♦
About St. Baldrick's...it looks like they're going to have some in-person shavings, but unlike previous years, they'll schedule appointments. So, it won't be the party atmosphere and the bar might not even be open (and they reserve the right to change the date) so now I'm waiting to see when the appointments open up, and I'll snag one.
But. BUT.
Michelle DKM has made an offer for my fundraising goal. If I hit $2000, she's going to cut her hair--cut, not shave--and donate it to Locks of Love (or another hair-collecting group, not sure.)
So it's a two-fer. I shave, she cuts, everyone wins. 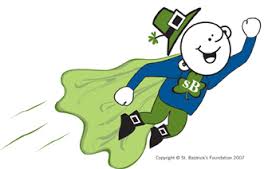 I realize I'm fundraising for two things at the same time, but...these are the only ones for this year. Both benefit children's cancer research; one involves my embarrassment for a few weeks, one involves sweat and effort for a month. And the donations are tax deductible.
♦♦♦♦♦♦♦♦♦♦♦♦♦♦♦♦♦♦♦♦
I've been excited and relieved to see so many friends online are already getting their COVID vaccinations...and a little jealous. At the rate CA is going, I won't get one until mid to late summer, and that's the group with health issues. Gotta admit, I was disheartened to realize it could take that long, and I'm not really counting on the distribution to improve unless Pfizer and Moderna ramp up production and the government figures out exactly how to get it into peoples' arms.
Right now it's such a shit show that it feels like I'm stuck at home for a lot longer, and it's getting to be a bit much even for an introvert.
I hope that with a new administration some major improvement is coming, but I'm not holding my breath.
Posted by Thumper at 1/24/2021 02:26:00 PM

Many things struck me in this post, and I could comment a page or 2 on each, so I have to keep it shorter than I would like.

First, I totally understand Max staying on the high ground watching for Buddah. Aging Ayla does the same thing about Laz. And, like Buddah, Laz understands that SOME places are Ayla's.

Second, I donated a couch/love seat combo to a charity omnce. 3 weeks later, I saw it in a newspaper article about how donations helped people. The furniture pattern was unmistakable and I remembered the 2 cats who loved sitting on them. The new owners (their first apartment) were so happy.

Third, when you are bored, injured, or quarantined by Covid-19, trimming your hair is a nice change of routine. Until you have none left... It's like leveling dining table legs. Suddenly, you have a big coffee table! LOL!

Pee Ess - Loved your Amazon page! I KNEW I forgot something...