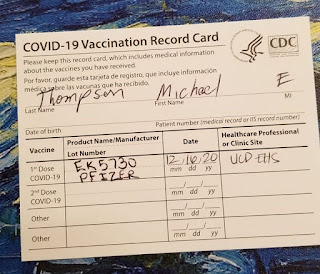 Better than Christmas for us…when the hospital where the Spouse Thingy works received their first shipment of Pfizer vaccines. I’m talking 8-year-old-kid levels of excitement, knowing he was in the first tier to be vaccinated. They made it clear that the ER and its staff were priority—and we both agreed with that—with other essential providers to follow. ER, ICU, COVID ward, then the OR, all considered first tier, in that order.

The email to personnel went out and the scheduling of appointments began; based on the info in the email we thought he would get his first shot next week. But there was a little notation: there may be a small number of walk-in slots available. Yesterday morning he had business to take care of in the area, so he decided it wouldn’t hurt to pop in and see what the odds were.

The odds were in his favor. And thusly, I learned on Facebook that he’d gotten his shot.

Yes, I know where I rank.

In three weeks, he’ll get his 2nd shot, and two weeks after that, he should be good to go. Still masking, still taking all the precautions, but that deep worry about a patient who tested negative but was exposed and might have it anyway, who will somehow cough on him or breathe on him, even with all the PPE (and he is geared up while doing a case)…that worry becomes so much less.

You can bet that I won’t hesitate when I’m eligible to get my shots.

Do I worry about the speed with which this has been rolled out?

Look, I know it seems speedy, but it really hasn’t been. There’s solid research behind this, over 25 years’ worth. We could have had them sooner if not for the absolute necessity of dedicated phase testing—there was no way around that, no matter how confident the companies producing the vaccines were in the efficacy of their production.

BUT THIS VIRUS IS NEW! YOU’RE NUTS! It’s still a coronavirus, which is not new. Look at the common cold—there are four common cold coronaviruses, and over 600 variants. There has been research into those as long as people have been looking to cure the common cold. And until someone cut the funding in the US and closed it down, research into coronavirus was humming along nicely; how much faster might this have been if it hadn’t been?

WELL, THE PRESIDENT ISN’T GETTING IT SO WHY SHOULD I? He’s not getting it because he’s had COVID recently enough that, while he could get the vaccine, he’s choosing to wait. And this is one thing I agree with him on. The recommendations are that if you’ve had COVID within the last couple of months, you can wait; if you had it early on, get the vaccination. He’s not getting it, thus saving that dose for someone else, but the Vice President will, and he’ll do it publicly.

BUT WHY BOTHER IF THE ANTIBODIES ARE GONE IN A FEW MONTHS? Because that’s how inoculations tend to work. You get the shot, your body detects it as a foreign invader, creates antibodies to fight it, and basically writes the instructions on how to combat that foreign entity on a cellular level, and then sheds the antibodies. When reinfected, your body already has the instructions on how to fight it off, it creates new antibodies, and the cycle continues. It’s why you only need some vaccinations once in your life—like smallpox or chicken pox. There’s no reason to think this will be different.

Will there be a variant strain that will require boosters? Possibly. We get flu shots every year because the strains change. But that’s a lot less of a hassle than actually getting COVID. It’s just a shot. We get those all the time.

BUT I HEARD GETTING IT CAN MAKE YOU SICK! It might make you feel awful for about 24 hours, but you won’t actually be ill. It also might not make you feel off at all. Your arm will probably be sore…just like with a flu shot (that’s all the Spouse Thingy has, a sore arm. No calling off work for him.) But if you get those side effects? That horrible feeling is a good sign; your body is producing antibodies. Embrace it, because it will be over with quickly. 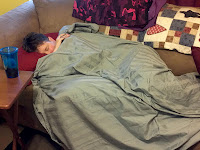 Remember when I had that awful bout with colitis a few years back? And a couple of lesser bouts since? That’s how I got through it, telling myself that it wasn’t forever, this was pain and sickness that would get better, so it wasn’t the end of the world. Pain and illness sucks, but it’s a lot easier to take when you know it will get better. The side effects from this will ease up.

We’re never going to achieve herd immunity if we don’t get the shots, not without killing millions of people.

So, yes, I am thrilled beyond belief that the Spouse Thingy was able to get his first shot so soon and that it’s just 21 more days until he gets the next. And I’ll get it as soon as I can.

I am freaking excited at the idea that it won’t be much longer. I’m gonna let them stab me right in my Superman tattoo.

I am also eagerly awaiting my turn to get the shot. I am 73 with diabetes, COPD, and high blood pressure. I am still going to stay home as much as possible, wear a mask, and wash my hands. I know it will take awhile to get to me. I guess the lockdown doesn't bother me as much as some people since I already spend most of my time at home.

We are glad he's safer now too. And mom will be in line to hers when the time comes

I love reading your blog for the way you articulate things clearly and with the common sense God gave you. I’m referring a relative to this post....for obvious reasons. Thank you!

Oh and my sister was in the ER working when they filmed a segment at her hospital that made national news, St. Mary’s Hospital in Apple Valley, CA. So I can relate to your worry about Spouse Thingy...so very glad he’s gotten his first shot!

Hurrah! I am glad to hear this, our medical folks on the front line should be first priority. Thank you, Spouse Thingy, for your work helping the sick.

I know it will take a while for the rest of us to be vaccinated, so don't let up on your precautions yet, folks. But this is wonderful news, we have hope that there will be an end to the pandemic .

Excellent! As soon as my doctor gives me the go-ahead and there is one available, i will do it, too.