Thanks to y'all's generosity, I hit my goal for St. Baldrick's, with $4 to spare. So in two days, I will present myself to the people with the noisy clippers, get all the purple hair removed from my head, and hope that there's nothing weird growing on my scalp. After I'm bald and cold, I'm totally going into the bar for a shot or three of Fireball, and maybe a burger.

I can't thank you guys enough. And it would be totally weird if I tried. Like, someone would probably punch me in the face and yell ENOUGH ALREADY and I'm too old to duck quickly enough. I've gotten way too slow in my latter middle aged years.

Speaking of slow. I bought a new bike this week, one that's not glaringly bright or pretty, and one that does not have a motor to give me that boost I've fallen in love with on my long rides. 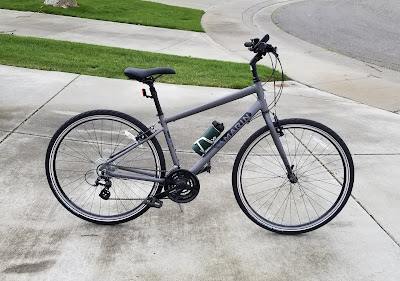 I am so slow on this thing. Like, most runners can pass me up. But once my butt gets used to that seat, I'll be able to do 10 mile rides with no difficulty, I think. Yesterday I rode 4 miles to Starbucks, worked for about 45 minutes, and then 5.5 miles home. I wanted it to be 6, but...yeah, my poor asterisk was screaming at me.

There's still the concern about my blood sugar crashing and once the weather warms up, overheating, as I wont to do. I need to get in the habit of carrying Lifesavers with me, and figure out ways to cool down periodically on a ride. It might mean investing in a few Arctic Cool shirts, which are kinda form fitting and not especially flattering given my nice spare tire, but...not passing out mid-ride trumps discomfort over the flab.

This wouldn't have been possible if not for the thousands of miles on the ebike. Okay, two thousands, but still. More that one. Riding that got me into shape just good enough to know I could make the leap, and while I still worry about my knees and face planting, I can do it. Two years ago, pre-ebike, no way.

This doesn't mean the ebike is going anywhere. It's still my favorite toy and I'll still pile the miles on it. But most days, before I hop on it, the new Thumper-powered bike goes out for an hour. And hopefully I'll get faster.

Also hopefully, that 80 year old lady I sometimes see out riding won't zoom past me. I don't think my ego could take that.

This was delivered on Feb 26, and the cats are just now jumping on it.

I honestly thought that they would claim it by the end of the day, Buddah especially since it gives him a much better and more comfortable view than the sideboard that was there.

They still won't get on it at the same time, though. 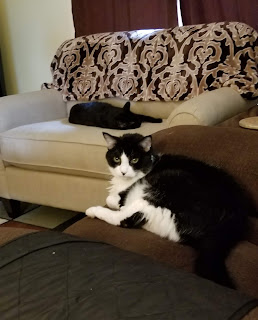 Consider buying a replacement seat for the bike that better suits your asterisk. Beats having a sore bum all the time and it is easy to do. So if the ebike seat is suitable, think about getting the same type of seat for the new bike.