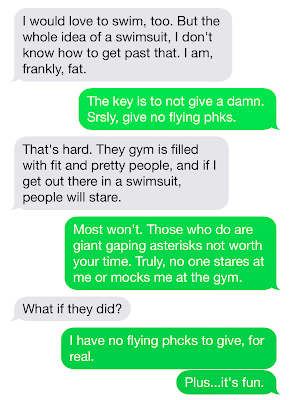 Many years ago, when we were living in Belleville, IL and had a membership at LiveRite Fitness, I got into a fight in the locker room. And not a hissing-at-each-other, verbal blast; this qualified as a fight, even though I never touched her.

I was changing clothes and in the next row of lockers over, there was a rather large woman drying off from her time doing laps in the pool. I wouldn't have even noticed her had Bleached Blonde Barbie not come over and whispered--loudly--that "those" people didn't belong in the gym.

You can imagine how well that went over with me. The end result was me ducking and her smashing her hand into the wall behind me, and then being thrown out of the gym (not me...I got to stay.)

I remembered it today when talking to a friend (see image; she knows I'm sharing it) about the anxiety of going to a gym when you're overweight. She has a membership to a good gym, but she never goes, because it feels like everyone is staring and judging, and the white-hot feeling of being the object of ridicule makes it unbearable.

Here's the thing. I have worked at a gym, and that was during the height of gyms being meat markets. A large percentage of the people showing up every day weren't really there to work out; they were there to hook up. But of the people who were there to sweat...some were in fantastic shape, but many were not, and there was little talking behind peoples' backs about their weight issues.

I've been a member of several different gyms and fitness centers, and BBB was the only person I can recall being actively mean about another member's weight.

That doesn't mean there aren't those hanging around the gym who aren't thinking horrible things; there probably are, just like they're hanging round thinking horrible things about other people in the grocery store or post office or museum. People of Walmart? Those are the people who think and say awful things about others, and who mock them from the safety of their computers.

The majority of people in the gym aren't there to do anything other than get their own workouts done. If they think anything about the overweight person stretching in the corner, it's more likely to be "good for him" than anything else.

Every time I've hit the pool so far, I've been by far the largest one in the water. No one stares. No one mocks. I doubt they note anything other than there is someone in a nearby lane, which means there will be water displacement and its wake as they swim through it.

Okay, they may wonder about the snorkle I swim with. If they're going to mock anything, that's it.

And if someone was disturbed by my girth swaddled in lycra?

Tough for them. I'm there to swim, which I thoroughly enjoy, and I don't give a damn what they think.

Go have fun doing the things you want to do, and anyone who has a problem? That's what you give them.

Amen, amen! You said it, Sistah!

Still, there are those out there who just feel they have to share: I have been stopped in my walks by total strangers trying to sell me weight-lose programs and diet foods. Yeah, I'm fat, but I don't need comments on it.

OMG!! I couldn't believe it when I read your first sentence! I live in Belleville, IL and do you know that LiveRite burned down? I have been enjoying Max's blog and LOVE your sense of humor. Thank you for all the smiles :)

Maybe that Barbie wannabe held a grudge and was still pissed she got the boot! ;-) Folks have no business mocking others about anything especially weight! I was always taught not to stare and not to comment cause it was cruel. I still feel that way!