I think most moms will understand: I could not bear to go watch my son jump out of an airplane. Logically, I knew he would be fine; the place he picked for his first jump has been in business for over 20 years and has a Zero Death Rate.  It wasn't one of those places tucked into the middle of nowhere, a place where tandem jumps are done only once or twice a week. They run jumps all day long, every day. They have the experience and a stellar reputation, so I felt as good about it as I could.

But I couldn't watch. I couldn't go and sit there and not only subject myself to increasing degrees of misery as he went through all the important preparations to make that jump, I couldn't subject him to his mother melting into a giant pile of please-don't-do-this goo. If he backed out, it had to be because he wasn't ready, not because he wanted to spare me anything.

I knew he wouldn't back out, but moreover, I really wanted this for him. I understood why he wanted to jump out of an airplane; it probably isn't all that different from why I wanted to learn to ride a motorcycle, and why I still love it.

It's a hypocritical kind of thing; there are risks I'm willing to take, but that doesn't mean I want my son to take them.

It does mean I get it, though.

I sat in the hotel room and waited; his dad, on the other hand, went. I don't think it's a gender thing; I suspect there was a huge part of him that both didn't want to see his son take that jump and a huge part that did. He was simply able to shove down the agony side and enjoy the fact that his son was doing this.

It was a huge jump into turning 30. 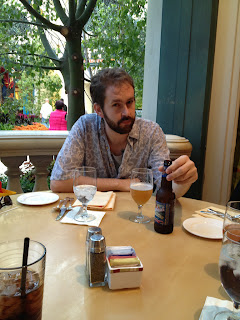 And let's be honest: life just starts getting good when you turn 30. You're over your teen angst, you've gotten through the final frontal-lobe developing thing in your 20s, and you're settling into who you really are. You have a better grasp of who you want to be. You can look at life and not feel like you're trying to grab things out of reach; you look at it and realize that the things you can't quite reach, you'll get to. There's always a way.

While I was on Facebook, allowing myself to run the full gambit of emotions that swirl around having a kid turning 30 and doing something so big, I also got a cold smack in the face: an icon in the 3 Day community--someone I asked you guys to go read about, to burn into your brains--was in the very last days of her life. Back in December, she asked everyone to let her go; she'd fought hard for far too many years, and was ready to take what time she had left for herself and her family.

She did not want to be forgotten.

She had a goal, to make it to her 30th birthday. That doesn't seem like too much to ask for, after battling cancer for 7 years, making to it 30 seems like something reasonable. But her birthday was months off, and she had only hours left, days if we were lucky.

Selfishly, I think most who were aware of her wanted just the idea that she was still in this world, even for a few more days.

The enormity wasn't lost on me. My son was jumping into 30; Bridget Spence was fading from it. I still have all the light and joy that comes with knowing my child, adult as he is, is fine; Bridget's mother is suffering the agony of a loss no parent should face.

I enjoyed the flood of relief that came with finding out the Boy had made the jump and had both feet safely on the ground; I embraced the enormity of what he had done, and the idea that he would certainly do it again. I spent his birthday feeling every degree of grateful that I could; I checked Facebook off and on for the next couple of days, waiting for news I did not want, all while celebrating that we have this incredible young man in our lives, that he's ours, and that he turned into one heck of a good person. 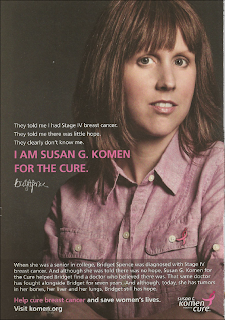 Bridget died on April 4th. On her own terms.

My heart breaks not only for the 3 Day family, for whom she was an enormously bright light, and for her husband, but especially for her mother. I don't think there's any coming back from losing your child, no matter how old.

Today was her funeral, and hundreds, if not thousands, of 3 Dayers wore pearls in her honor. Lacking that, I wore my pink 3 Day t-shirt. I don't pretend it makes any difference; no one who saw me had a clue why. I don't think I even mentioned why to the Spouse Thingy. And I didn't do it for all the reasons one might suppose.

While it was in honor of Bridget and her fight, it was also for her mother, whose child didn't get to hit the milestone mine did.

I am so, so grateful that I have my son, and that he took that leap. I know Bridget's mother--even though I've never spoken to her nor is it likely I ever will--is deeply proud of her, as much as I am of the Boy.

We both raised good people. How could she not be proud?

By now, Bridget Spence has been laid to rest, but she's still very much on everyone's mind. And she will be tomorrow, and the day after.

We promised her we would not forget her.

I understand living with your child's decisions. Mine started making terrifying life decision at 20 when he joined the Army. I was proud and terrified at the same time. Having read my Dad's account of war, how could I sleep at night. Now 20 years later, he is still in the Army, has gone to war zones twice and we all survived. My sister has lost two sons (step sons, but she raised them) both before their 30th birthday. I know the sadness of losing a child to cancer (one nephew). It takes a lot to let our children grow up and follow their own path, even if it means loosing them on their own terms.

All leaky eyed here. I guess I won't wear my pearls about thinking of her in the future.

She had an impact on a lot of lives over the past years. Some are blessed with many years to make the same impact she had in just a few.

I followed your link when you originally posted it. She was such an amazing, inspirational woman.

Hey Thumper - I understand without being exactly in the same situations. I had a childhood friend who slowly died of MS. In his last days we played Monopoly mostly by me setting up hotels and pieces and telling him stories about them.

I had a girlfriend once who parachuted once, so I bought her a ride on a glider (and she was thrilled). I told her I couldn't watch her do it myself (fear of heights and being VERY firmly planted on the ground). But when I really wouldn't go watch the flight, we broke up.

So I kinna understand.

So also, thank you for your comment about me and Dad. Dad is healthy for a 90 year old. He could live for years. But he will always be =this= close to dying any day. It could be tomorrow; it could be in 5 years.

There will be a sigh of relief in the family, because Dad struggles through each day, and I don't plan to feel any great guilt. No one lives forever...

But I thank you SO much for the support. I needed that just now.