No surprise...today I've barely been able to blink, so tired and feeling beat up that all I really wanted to do was curl up and watch TV. After a quick trip to the grocery store I did just that, and Max snuggled up in bed with me to watch some Doctor Who. He was pretty annoyed with me yesterday, but I think he's forgiven me now for being gone. Or for the Grandma leaving. I'm not really sure what he was most upset about.

But the trip--that was a whole lot of fun. I went through the pictures we took and realized 95% of them were of the Bellagio Fountains...for some reason the camera remained in the backpack and we just didn't take many.

When we decided on this trip, a vacation to celebrate the Boy's 30th birthday--which had to be done right because you only turn 30 once and it's a milestone and I'm all about the milestone moments--it was agreed that we wouldn't cheap out and stay at the so-so hotel and we would eat mostly decent food instead of 90% fast food. We would get rooms with a view and eat what we really wanted and the Boy would literally jump into his 30s by diving out of a perfectly good plane.

He loves the Bellagio and plays poker there any time he goes through Vegas, so we reserved two semi-suites with views of the fountains, and it was just a bonus that I made the reservations on apparently the perfect day, because I got them at an Oh-Hell-Yes price. And they needed the Boy's name and birth date for his room--mostly, I think, to prove he was over 21--and I didn't think anything about it.

When we checked in, they had two rooms available: one was the Salon Suite I had reserved, and the other, the one they had for Curt, was not.

No, they put him in a room that did not have a fountain view.

They put him in this:

He was upgraded to a full suite with a king sized bed, dining area, living area, bar, two bathrooms, and more amenities than I could count, I think because of his birthday. It was almost the size of our entire house.

For some reason, he was not upset at the lack of a fountain view.

But the view from our room...I loved the view, especially at night. 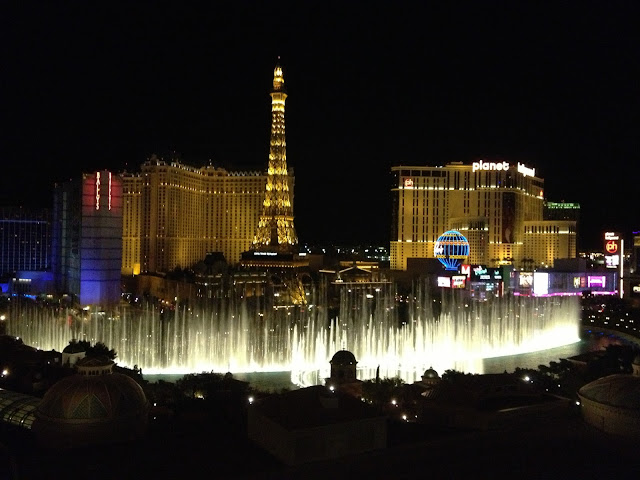 All in all, we had a great time. There was a lot of walking--roughly 8.5 miles a day--and we saw two of the Cirque du Soleil shows, "KA" and "O." They were both terrific, but I have to give "O" more points; of the three we've seen now, LOVE is still my favorite, with "O" a close second and "KA" seriously close behind.

I think we had every dinner in the Bellagio Cafe--they owe me a free dessert or something for putting out a fire at the table behind us. Seriously...the people who had been there just tossed their napkins on the table, as people are wont to do, and one landed on a candle. When the Spouse Thingy's eyes went wide and he started saying something, I turned around to look, and sure enough, fire. I got up and dumped a glass of water on it. That makes me a damned hero, right? SAY YES, DAMMIT!

Staying there kind of spoiled us for any hotel we may ever stay at. It for sure makes the one we stayed in last year look like a total dump.

I'll need another day or two to recover, but so far I haven't gotten sick, which is what I seem to do any time I go somewhere like this. Knock on wood. I think the Boy had a terrific birthday--crossed a major thing off his bucket list and he wants to do it again, played a lot of poker and not badly, drank A LOT of scotch--and we enjoyed the hell out of it all.

So glad you had a great time. The rooms look incredible and that can make or break a trip there (especially if you are losing!) Get some rest!
Happy Birthday to the Boy!
Gael

Oooo, them beds would hold lots of kitties in nap piles.

No pictures of the bath? We need to see if the tub is suitable for tub hockey!

That is soooo cool!!!!!
I've never been to Vegas, no interest at all & I don't gamble. I think the town would probably be a migraine trigger for me. My husband goes in December with his golfing buddies every year & they stay at the Imperial Palace which he classifies a "kind of divey." He has fountain pictures from the opposite side of where you were. Ralph Inglestad built the Imperial Palace and he is a UND benefactor who funded the new hockey arena with his millions. Aptly named "Ralph Englestad Arena" in Grand Forks.

Lovely luxury rooms! Did you spend any time in them? That is the way it usually is.