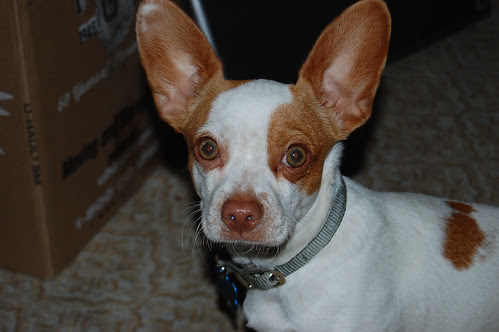 Butters is the Boy's newly adopted puppy; he's a 10-11 month old Chihuahua/French Bulldog mix, and we finally got to meet him today.

The cats were not happy; they both got a good look at him and then tore upstairs to hide under the bed, and when Butters was gone Max showed his displeasure by barfing all over the kitchen floor. The Spouse Thingy and I, though, found him utterly adorable. He's cute, he listens to the Boy and follows him around, whines when he cant find him, and didn't seem to have a problem jumping up on my lap, curling up next to me, and licking my face.

Now, the Spouse Thingy loves dogs. If we thought Max could take it, we'd likely be getting one when we move into the new house.

Butters, unfortunately, has a problem with strange men and was very slow to warm up to him (but he did happily take treats!) and there was not as much petting as the Spouse Thingy would have liked. When Butters was distracted by Buddah coming downstairs to see if he was still there, he finally let the Spouse Thingy pick him up....but only for that minute.

Butters is definitely a rescue dog; the Boy got him from the shelter, and it's very apparently that he was abused before the shelter got him. He shirks away from the hands of men he doesn't know enough to trust, and at one point when the Boy was throwing a toy for Butters to chase his hand moved too fast and barely brushed Butters' cheek...and the poor puppy bowed down and cried out--he was terrified he was going to get hit. That damn near broke my heart. It still does...I choke up thinking about it.

Anyone who makes a dog feel that way deserves a huge kick to the nads, and I'd happily provide the service free of charge.

The Boy got Butters about 3 weeks ago; he'd gotten another dog a few weeks before, a Beagle named Molly, but the situation that put Molly up for adoption (owner went into assisted living and was not allowed to keep her there) changed, and her foremer owner really wanted her back. And the Boy, in site of wanting to be selfish and keep her, took her back, understanding it was better for Molly, and better for her Person, who is elderly and needed Molly.

And then came Butters. After watching them today it was pretty clear...Butters was supposed to be the Boy's dog all along. They were meant for each other. Butters never has to worry about being hit again and the Boy has the patience to teach him that he doesn't have to be afraid. He has friends and roommates that will treat Butters well...and now we have a grandpuppy to spoil.

Well hell yeah. Don't think for one minute that Santa isn't leaving Butters a couple of spiffy things for Christmas.