For the first time in a very, very long time, I'm sitting in Starbucks with the intent to get some work done. I have my Passion Tango Iced Tea (or perhaps it's just passion tea now? They messed around with things), my laptop, and the completed first draft of The Lost Boys of Everywhen to work on. It's only semi-busy here, with just the right amount of background noise and the music doesn't suck, so you'd think I'd just jump right into it.

But no, my brain doesn't work that way.

Of course I have to sit here and blog, announcing to the world that, hey, I'm doing my job. Or getting ready to do my job. Maybe just pretending to do my job...

I've been trying to figure out when the last time I came here for anything other than a quick rest stop mid-bike ride, and other than one time when I sat here for all of about half an hour--I was not ready to start working--I think it was pre-pandemic. I can't even tell you for sure what my last completed work was, though I think it was Interview With a Pest.

There's been talk of doing another edition of that, with some non-interview back matter, but I don't know if my heart is in it. I think by this point everyone knows what happened and probably don't want to revisit it any more than I do.

Now, I should have been here working on Riding My Asterisk Off (the book, not the blog) but...as happens in publishing, not everything went according to plan. I got my advance, I started working on it in clumps, started riding with specifics in mind, and was very near the point where I intended to dedicate a large chunk of everyday writing the book. 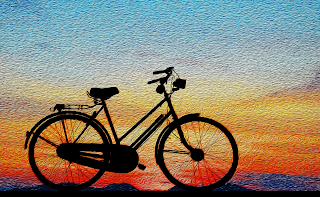 Then krap happened. This book was signed to a new publisher, launched by Eric Crow, the son of my very-long-time editor and Battleaxe, Tracy, and they were days away from an official launch. Like, property purchased, people hired, contracts with printers, distributors in line, and several writers under contract.

Eric suffered a series of strokes, so many I don't think they could keep count, and he passed away.

There is no company without the owner. Tracy understood that she could have stepped in and taken over, but her wheelhouse is in editing and not running the whole thing. She's also in her 80s now, and not terribly keen on starting a venture as big as this one without her son at the helm.

Long story short--and it is a much longer story--the company folded. All writers were paid out the balance of their advances (fun fact: advances are not a one-payment thing. They are usually 3-4 payments, one on signing, one on book delivery, one on publication, and sometimes another at a specified date after publication) and all but one were understanding.

(Yeah, that last one? Not naming names but he's a raging tiny dick, I online-know the guy, and I hope he gets his ass laughed out of each and every lawyer's office he enters as he seeks someone to help him sue.)

In any case, for now Riding My Asterisk Off has been set aside. I'll still write it, but not right now. And it will likely be a different book than was planned.

As for The Lost Boys of Everywhen...that should have been online a while ago, but other things came to light (Amazon krap) so it will go to print before it goes up for free. But it will go up for free. I just have to finish it beyond the first draft.

So sorry about what happened to Eric and the company. My condolences to his mom, too. I hope you do write the bike book, whatever form it takes.