This TV is fricking huge.

So of course, this week we moved it from one room to another, along with a bunch of furniture and exercise equipment, essentially swapping two rooms because this one has the fireplace and Max won't lay in front of it if I'm not in the room... so, yeah, we rearranged for the benefit of the cat.

Previously this room had a treadmill and rower, and another fricking big TV. We moved that one, too. It resided on top of a bookcase, the top of which was at my chin height. That require getting it off without dropping it, moving it to the next room, moving allllll the damned books and then the cases, after which we had to wrestle that TV back to the top.

And then realized we really didn't want it there. So down it came, and we took it to the garage, where we set it on the floor...

...at which point my back said, "Bye, Felicia" and a wayward disk somewhere around L4 and L5 attempted to make as escape.

After that, after hobbling back into the house, I managed to stub my foot on the very metal base of the rower, and I'm about 50% sure I broke a toe. 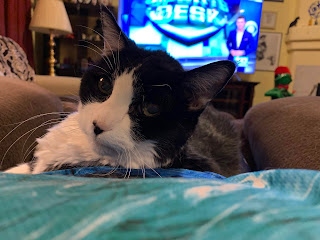 So today yesterday I moved as little as possible, with a cat pinning me into my chair, because that's what he does when he has the chance.

I'm pretty sure he thinks he's helping, but when your back hurts and you need to get up to pee, 12.5 pounds of cat is kind of a nuisance.

But now it's 2 am, my back hurts like a mofo, I can't sleep, and the wind is blowing so damned hard it sounds like what I imagine camping in a wind tunnel would be like.

There is none. I just can't sleep so I'm whining about it.